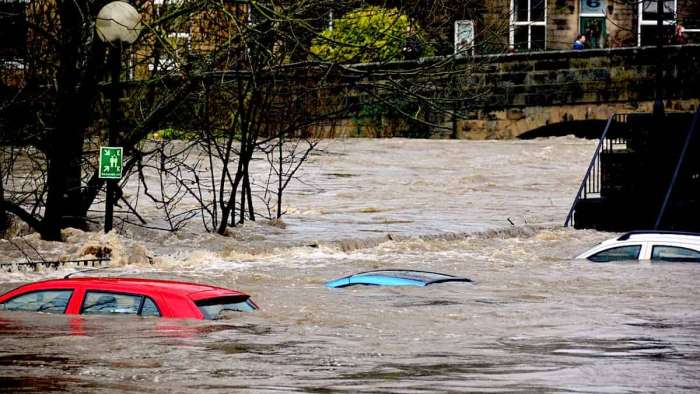 How To Spot A Used Car Being Flipped After a Hurricane

With the hurricane season approaching, we can likely expect to see a surge in used cars that have been swamped in storm water and then flipped after the flood for resale. Here’s some good advice from Consumer Reports automotive experts who explain what you need to look for in order to spot a used car carrying hidden problems from flood damage.
Advertisement

Used Car Sales Could Rebound Due to Hurricanes

According to recent news, used car sales are dropping while used car prices are still overly inflated. Part of the reason is that of supply. However, we may see an upsurge in the availability of used cars on the market soon due to sellers attempting to flip used cars with no disclosure that they were previously damaged in a flood.

We typically see a lot of news footage toward the end-of-summer and fall season hurricanes that result in a significant amount of damage to cars. The more dramatic ones are of drivers attempting to cross waterfilled low spots in the road, only to need rescuing while their vehicles fill with water up to their windows and/or are actually carried away by a strong current. Naturally, we assume that those cars are totaled and of no value to anyone anymore, save for some parts salvaging.

However, in practice this does not prove to be totally true. In fact, according to a past Consumer Reports warning, a significant number of flood damaged cars wind up repaired well enough to start, and then are flipped for resale to unsuspecting used car buyers, adding yet another used car scam to worry about.

“…flood-damaged cars are often transported well beyond their original region after major storms to locations where consumers may be less aware of what warning signs to look for. Water can ruin electronics, lubricants, and mechanical systems. It may take months or years, but corrosion can find its way to the car’s vital electronics, including airbag controllers.”

In an ideal world, used car buyers should not have to worry about hidden flood damage that can haunt them and their car. Some attempts at protection exist with laws requiring “salvage titles” informing a potential buyer that a vehicle has been previously totaled, but has been repaired and passed an inspection process.

In the real world, however, “title washing” occurs where, “…cars that have been totaled (or stolen) get clean new titles in states with lax regulations,” states CR analysts. Furthermore, depending on the state where the flood damage occurred and the actual ownership of the vehicle, not all flood damaged vehicles qualify as “totaled” nor are they always reported as having been flood damaged during any vehicle disclosure before buying.

“The V.I.N. is a vehicle’s birth certificate and its death certificate,” said Frank Scafidi, director of public affairs at the National Insurance Crime Bureau for the New York Times.

However, even these services do not offer 100% protection, and many vehicles do come back from the dead.

Signs of a Flood-Damaged Car

What consumers can do, however, is protect themselves by learning what signs to look for when dealing with a used car that might have been flood damaged in the past.

The following is a summary of what to look for when inspecting a used car for flood damage recommended by CR and a variety of other resources warning used car shoppers.

• Inspect the carpets for a musty smell, staining, or having caked-on mud. Brand-new carpets in an older vehicle are a red flag.

• Check the seat-mounting screws to see whether there’s any evidence that they were removed. To dry the carpets effectively, the seats must be removed and possibly even replaced.

• Look under the seats with a mirror to see if the springs are rusty. Use the mirror to also check the undercarriage of the car for flakes and other signs of corrosion.

• Inspect the lights. A visible waterline may still show on the lens or reflector.

• Inspect the difficult-to-clean places, such as gaps between panels in the trunk and under the hood, for mud and debris.

• Look on the bottom edges of brackets or panels for unexplained grime.

• Look at the heads of any unpainted, exposed screws under the dashboard. Bare metal will show signs of rust in flooded cars.

• Check to see whether the rubber drain plugs under the car and on the bottom of doors look as if they have been removed to drain floodwater.

• Be sure to test ALL of the electrics including the radio and speaker system, interior and exterior lighting, power plug ports, dash panel lights, electric windows and electric seat adjustment controls. If something is not working---have the problem traced to its cause or source.

And of course, have a trustworthy mechanic and/or body repair shop examine the vehicle. Often, these professionals will be able to tell with certainty whether a suspect vehicle has ever been in a flood.

For an informative video on how to spot a flooded car, here is a useful video made by the good people at Consumer Reports that offers some additional tips and what you should do.

Flooded Cars: How to Spot One Before You Buy | Consumer Reports

If you have a flooded car story to share, please let us know about it in the comments section below.

COMING UP NEXT: Best size-rated SUVs and cars for short and tall drivers.

Photo by Chris Gallagher on Unsplash