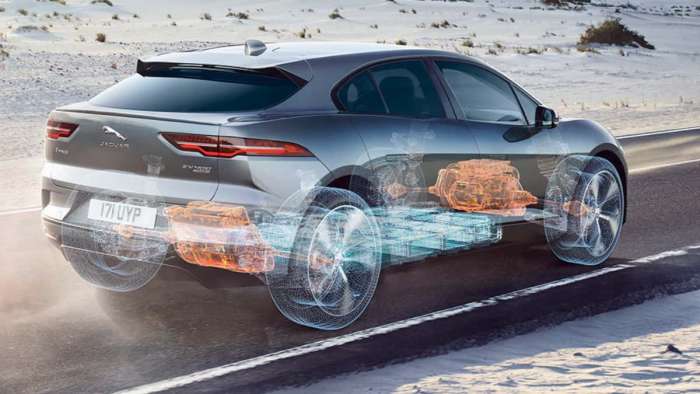 Tesla, Ford, and Volkswagen all cribbed their most popular EVs from Jaguar's innovative EV crossover design. This year, Jaguar will make meaningful changes to the I-PACE to keep it moving forward.
Advertisement

Jaguar's I-PACE battery-electric crossover has many peers in the industry now. With Jaguar moving towards an all-electric lineup in just a few short years, the I-PACE remains an important vehicle for the JLR group. Jaguar's I-PACE still stands apart from the pack with class-leading luxury, but with Tesla's Model Y, Ford's Mustang Mach-E, and others edging closer, Jaguar is making some improvements.

Background Story: Jaguar I-Pace Has Its Own Unique Vibe

Updates to 2022 Jaguar I-PACE
The first thing to know about the I-PACE for 2022 is that it will come in just one very well-equipped HSE trim. Luxury appointments like heated and cooled Windsor leather seats are now standard. Also included is an 825-watt Meridian audio system.

Many of the changes to the I-PACE are related to infotainment and living electric. First up, Jaguar is updating its infotainment system. Jaguar has named its new infotainment system Pivi Pro. This new system aims to make it easier to find almost anything one might want in the menus in two touches or fewer. We were thrilled to hear the touch interface remains. Android Auto and Apple CarPlay are, of course, included.

Jaguar is also adding over-the-air updates. This is now commonplace in all modern vehicles, and it is great to see it added to the I-PACE. Jaguar's driver-assist and active safety systems will leap ahead with adaptive cruise control featuring stop-and-go ability and lane change assist.

Jaguar Owner Experience
Ont thing Jaguar is not changing is its best in the industry warranty and included maintenance program called EliteCare. Owners will enjoy a nearly fixed cost of ownership for the first five years or 60,000 miles, and Jaguar's battery warranty extends out 8-years or 100,000 miles and does include a state of health guarantee.

Watch for Jaguar's updated I-PACE to appear at your local retailer in the coming months, or contact your dealer now for information on pre-ordering.