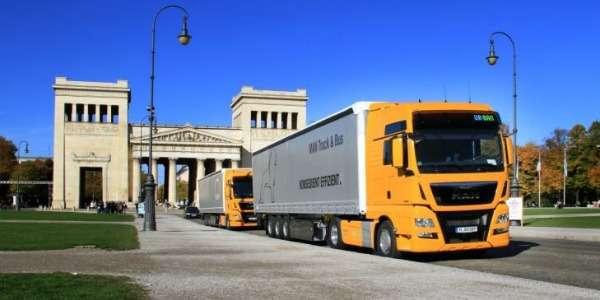 Natural Gas Is the Fuel of the Future Believes MAN

MAN had a rough 2013, but the company's CEO believes natural gas, among other things, will be a saving grace that pulls them into the future.
Advertisement

2013 was a difficult fiscal year for MAN, but Volkswagen Group has announced that the first quarter of 2014 has been a good one, and MAN is on a positive march up. Many of the markets that concern the company are in a slight economic recovery, Dr. Georg Pachta-Reyhofen, Chief Executive Officer of MAN SE, explained. And, while the full-year sales revenue may be somewhat down, he admitted, Pachta-Reyhofen also is confident that the company will see a significant increase in operating profit.

Shareholders are no doubt glad to hear that there is light at the other end of the profit margin. Against the backdrop of a difficult fiscal 2013 with a loss after tax of €513 million, the Executive and Supervisory Boards are proposing a dividend of 14 cents per share to the Annual General Meeting. However, free float shareholders will also receive the guaranteed dividend of €3.07 per common and preferred share laid down in the domination and profit and loss transfer agreement with Truck & Bus GmbH, Wolfsburg, in any case. “There is many an indication that the dark clouds in the sky will clear a little at least. We are cautiously optimistic about the fiscal year, even if we are somewhat removed from bright sunshine,” said Pachta-Reyhofen.

Pachta-Rehofen did add that one challenge was the Brazilian commercial vehicles market – which is key for MAN. At MAN Latin America, there was a clear decrease in orders received and unfavorable exchange rate effects also had a significant impact on the figures. By contrast, the economic environment improved. The CEO went on to say that the market was still dominated by a pull-forward effect from the introduction of the Euro 6 emission standard on January 1, 2014. The overall view at MAN is optimistic, however. “2013 was a year of highlights and lowlights. However, one thing was very clear: if the economic conditions are right and we can play all our trump cards, we are successful,” said Pachta-Reyhofen. He explained that in addition to committed employees and excellent market positions, this was primarily due to reliable and innovative products.

Pachta-Reyhofen said he believes natural gas is the fuel of the future, and the company is going forward with that in mind. MAN is the global market leader for natural gas-powered buses but this type of drive could also become an alternative to the diesel engine for trucks in the medium term. Other areas of energy consideration are on the table, as well. The energy revolution in Germany and the related trend toward decentralized power generation offers MAN great opportunities, the CEO explained: “Electricity will have to be generated when and where it is needed. We offer the perfect products for this with our power plant solutions – and specifically with our engines, gas, and steam turbines. They are ideal for the cogeneration facilities of large enterprises, for example.”

Pachta-Reyhofen extolled the benefits of the so-called power-to-gas method as a possible solution to the urgent problem of storing surplus renewable energy. One advantage is that wind or solar power can be converted into synthetic natural gas absolutely carbon-free and stored, which is an option for Germany, where large storage facilities are available. It can also be transported via pipelines. MAN, says the CEO, is involved in the entire value chain of this method like no other company: from wind power gear units and technology to produce and transport natural gas through uses like natural gas buses and gas power plant stations. This is just one of the issues that fall under the motto of this year’s Annual Report: “Tomorrow starts with MAN.”

LG's New EV Battery Plant Is a Welcome News for Tesla
Tesla Giga Berlin's New Hurdle: It's Not Only the Gov't, but Now Tesla Itself
END_OF_DOCUMENT_TOKEN_TO_BE_REPLACED