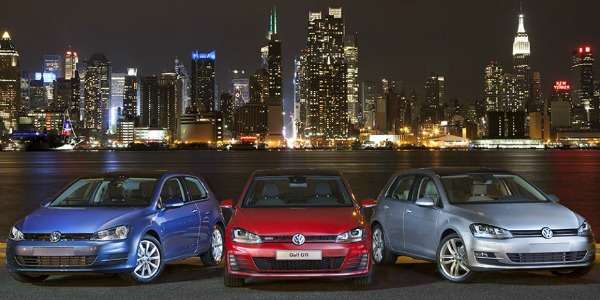 As consumers confirm their support for the Volkswagen TDI Clean Diesel with their dollars, the company plans the launch of the next generation of the Golf this summer.
Advertisement

March sales of the Volkswagen are up, and with momentum surging behind them, the company is no doubt optimistic about the upcoming launch of the all-new Golf.

With sales totaling 36,717 units, Volkswagen is looking at an extremely successful March. The Passat had its best March ever, with 11,050 units, while the Jetta Sedan was up 6.3 percent from March 2013, with a total of 13,687 units for the month. And, TDI Clean Diesel vehicle sales were significant as well. Not only did high-mileage, TDI Clean Diesel models models account for 26.6 of March sales, making it the best March on record for TDI Clean Diesels, Passat TDI sales in particular were strong. The Passat TDI sold 4,549 units, representing 41.2 percent of sales—not only the best March ever for the model, but the best year-to-date ever for the Passat TDI.

“The benefits of clean diesel vehicles continue to resonate with consumers,” Volkswagen indicated, with the company delivering 9,764 units. Going forward, Volkswagen the newest, most fuel-efficient, TDI® Clean Diesel engine, designated EA288 will power the 2015 Golf, Beetle, Beetle Convertible, Passat, and Jetta, all of which are set to arrive in dealer showrooms in the second half of 2014. The company is confident in TDI Clean Diesels and their growing place in the lineup of their vehicle offerings. Mark McNabb, chief operating officer of Volkswagen of America, was optimistic about the upcoming months, saying:

“We continue to see steady demand for our TDI Clean Diesels as well as our core vehicles. With the Spring selling season upon us, we expect to see more stability ahead as we lay the groundwork for the launch of the all-new Golf coming later this summer.”

Sales of the current generation of Golf were 1,989 units.

After solid March numbers for the Jetta (15,692 units, including the SportWagen), the company also has high expectations for the debut of the 2015 Model Year Jetta, coming at the New York International Auto Show in April. What can consumers look for in the new Jetta? A refreshed exterior, improved fuel economy and a host of new safety and technology features will all be features of the 2015 Jetta.