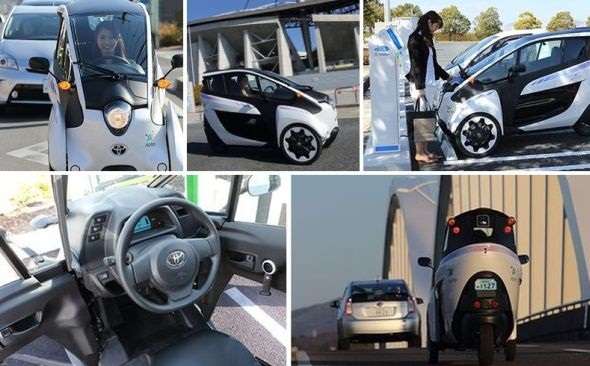 Toyota’s iRoad: the coolest tricycle you’ll never get to drive

Electric vehicles can be practical and compete on a level playing field with internal combustion automobiles as they do here in the United States...or they can be 33 inches wide and defy every conventional notion of how a vehicle moves.
Advertisement

Japan and France are the two countries lucky enough to experience Toyota’s iRoad three-wheeled electric vehicle for themselves. Road testing began last week in Toyota City and is expected to reach France later this year. About 2% of the weight of a Proterra electric bus, the iRoad is a 660-pound, 33-inch wide capsule from the future that seats one average-sized human (or two small ones) and tops out at 28 mph. It looks like a cross between a motorcycle, a golf cart, and a Segway. The vehicle that defies classification is powered by two 2-kW in-wheel electric motors up front and has a range of about 30 miles.

But the specifications almost don’t matter once you see it lean into a turn. Yes, it’s a car (okay, “personal mobility vehicle”) that leans like a motorcycle. The best way to learn for yourself is to watch Toyota’s video below.

I’ll attempt to briefly explain how that incredible leaning mechanism works. Toyota refers to the system as Active Lean technology, and it essentially works by monitoring steering wheel input, vehicle speed, and angle of lean of each wheel. A computer instructs a suspension-mounted actuator to induce lean in one direction or the other during turns and keep the wheels upright under steady conditions, while ensuring the two wheel angles are always in sync.

Obviously, such a vehicle is only useful in very dense urban areas but has great car-sharing potential. This is what makes it an excellent candidate for Japan and Europe. If it were extended to the Chinese market it could do wonders to help curb their air pollution in their most crowded cities. According to my foreign colleagues it could have a huge impact if it were brought to India’s chaotic streets.

Here in the States, though, we like our on-road vehicles to ride on four wheels – brimming with safety and convenience features, generous in legroom, and capable of reaching speeds that will get us in trouble with the law. In other words, we don’t like what we aren’t used to. The Toyota iRoad certainly fits that description and almost certainly will never make it to American soil, because our driving conditions and regulatory climate won’t allow it. Which is a shame, because this little bundle of technology looks like a blast to drive.