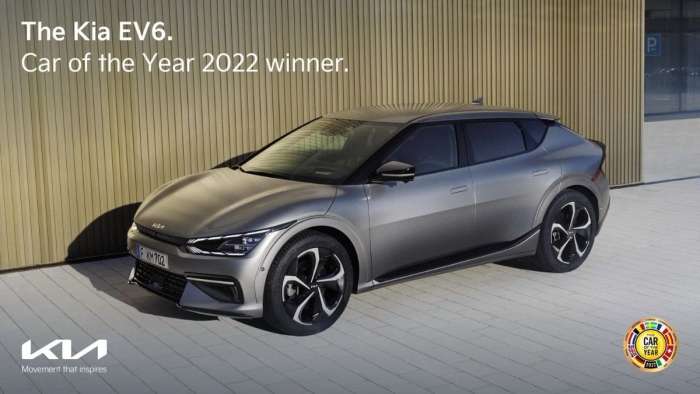 Kia EV6 Finalist for World Car of the Year Award

The Kia EV6, along with the Hyundai Ioniq 5 and the Ford Mustang Mach-E, is a finalist for the prestigious World Car of the Year Award. This is not the first time an EV will win the award, but it is perhaps most interesting that the three finalists are all electric vehicles (as this may be the first time this has happened).
Advertisement

The World Car Awards have six different categories: World Car of the Year, World Electric Vehicle of the Year, World Urban Car, World Luxury Car, World Performance Car, and World Car Design of the Year. Its mission is to “... to recognize, reward and inspire automotive excellence, leadership and innovation in a rapidly changing automotive industry on a global scale”. InsideEVs points out that with so many of the vehicles nominated for World Car of the Year sub categories also being electric, it may not be too long until fossil fueled cars no longer earn any of these awards. This is significant because the judges for these awards are global, so they bring a broader, and deeper media perspective and analysis than national or media outlet specific awards may. The winners of the awards will be announced at the New York International Auto Show on April 13th.

The Kia EV6, already named European Car of the Year (see photo above) is also up for more than one award from the World Car Awards judges. It is a finalist for the World Car Design of the Year award as well, along with the Hyundai Ioniq 5 (again), and the Audi E-Tron GT. Since the Kia and Hyundai are platform mates, it will be interesting to see if one or the other might take both awards, or split them. The Audi, with perhaps the most striking design on the three (depending on your tastes) could certainly take the top honor for this award, and the Ford Mustang Mach-E the other. Personally, I think the Kia and Hyundai are the more innovative and certainly offer advantages or features the Ford doesn’t (faster charging in particular), so I will be surprised if one of the Korean vehicles doesn’t win out. It is harder to say on the design award, being to some degree more subjective. It may come down to the design of the human-machine interface, rather than the external or technical details of each.

Compared to its corporate cousin, the EV6 offers a more sporty or performance oriented handling (or potentially harsh, depending) than the Ioniq 5, which focuses on ride quality and is said to be more comfortable than the Mach-E as well. Edmunds summed up handling differences between the EV6 and Ioniq 5 with “The Ioniq 5's suspension tuning is noticeably softer and does a better job at smoothing over ruts and bumps in the road. The EV6's suspension is much firmer and feels more at home on a twisty road and in the hands of a spirited driver” both cars returning identical 0-60 acceleration times on their test track. As such, judges may consider the EV6 as slightly more of a direct competitor to the Mach-E given both cars’ more sporty character. Whether that makes a difference, perhaps in Hyundai’s favor, we’ll have to wait and see.

One thing that is certain, whichever cars win these awards, it will boost demand accordingly. This is a problem, pretty much everywhere these days, as supply chain issues persist and inventory is scarce. Which of these options might be the most affordable, or available? The Kia already has the lowest MSRP of the 3 in the U.S. by a few thousand dollars. Availability for the Kia is also pretty much nationwide. Ford is aiming to increase production of its Mach-E significantly this year, but will face very steep supply chain issues in doing so. Hyundai may not make the Ioniq as “universally” available, if past trends hold true with limited availability of Hyundai’s plug-in vehicles in some parts of the U.S. For what it is worth, I predict the Kia EV6 will be the lowest priced option, by a significant margin, and at least the second easiest to find. The Mach-E will likely be produced in larger numbers, but its average selling price will likely be much higher so Ford could begin to face strong sales headwinds as the months go by and Kia is able to get more product into dealers’ hands. Leave your thoughts and questions below.