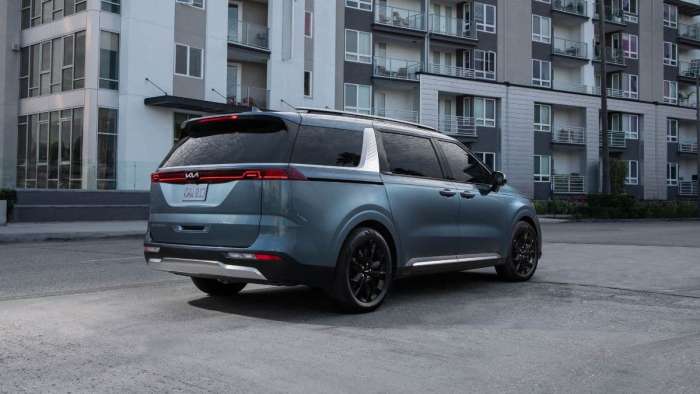 Hybrid Kia Carnival may be on its way next year

Not too long ago, I speculated about the possible electrification of the Kia Carnival minivan, or MPV if you’re picky. Apparently, Kia may be getting close to releasing a hybrid Carnival, as soon as next year in fact.
Advertisement

With only two other electrified minivans currently on the market, this seems like a logical move on Kia’s part that would help increase their market share and help their fleet average fuel economy too. According to drive.com.au, a new hybrid (HEV) version of the Carnival is under development in South Korea and has been exploring public roads, uncamouflaged. This is kind of exciting because most people would jump at the chance to burn less fuel/save money at the pump in their large, people hauling machine. And while it's certainly possible this HEV version of the Carnival won’t be offered in the U.S., I think that is unlikely since HEVs are the easiest and most cost effective means of improving the otherwise insufficient fuel economy of larger vehicles that drag down the averages of all the mainstream manufacturers. Frankly, Kia would have to be daft, or perhaps just battery supply constrained, not to bring an HEV Carnival to the U.S. market ASAP.

But might Kia be considering a plug-in hybrid version of the Carnival, or even an EV version, instead? It is pure speculation on my part to answer this question now, but I would say the likely answer at this point is: no. While an all electric Carnival would allow Kia to compete with the forthcoming VW ID Buzz, or even perhaps the Tesla Model X (for some more pragmatic shoppers perhaps) it likely would go on sale a couple years from now at the soonest, and not in the same year as its forthcoming EV9. So if Kia might be planning an EV Carnival at some point, my guess is that is at least two or more years away. A PHEV Carnival might be more likely in some ways, as the Carnival shares more than a few components with the Sorento and Kia is selling every instance they can make of that PHEV variant. But then, we must remember that Kia isn’t planning to make as many PHEV vehicles after this year (or next). Kia’s PHEVs will gradually be phased out (or down to a much smaller % of total production and perhaps only for certain markets). The PHEV models will be replaced with either hybrid electrics (HEVs) or full electrics (EVs), generally speaking, as InsideEVs has pointed out, previously. According to my math and the figures Kia shared in the InsideEVs piece, it seems most likely that Kia won’t make more than one or two more PHEV models before beginning to ramp them down, if that. In fact I think it is entirely possible that the soon to be released Sportage PHEV may be Kia’s final new PHEV and that Kia will simply focus on making larger numbers of the 5 or 6 PHEV models they manufacture, globally, rather than continue to release new and different models.

So, with this spotting by drive.com.au of a Carnival with a Sorento Hybrid style single exhaust tucked under the rear bumper, and the rumors of impending overseas launch, what might we expect from the Carnival Hybrid in terms of price, fuel efficiency, and feature set? I would say look no further than the Sorento Hybrid for a model on these. Prices will likely start at least several thousand dollars higher (though, given that drive.com.au said the Carnival HEV will be FWD only, pricing differences may be closer between hybrid and non-hybrid versions of the Carnival, depending). Similarly, expect to see differences in fuel economy like the hybrid and non-hybrid versions of the Sorento, with a significant boost of somewhere between 6-10 additional MPG compared to the standard non-hybrid FWD Carnival. Since the carnival is less fuel efficient than the Sorento, I would also expect the hybrid version’s fuel economy gains to be more meaningful, but also not as significant as the Sorento’s, with my guess being around 30 mpg, combined. I also predict that like the Sorento Hybrid, the Carnival Hybrid would only be sold in certain trims, and most likely the lower to mid level trims I think. However, it might also come in an upper trim since MPVs are all about the comfort and convenience of its buyers. 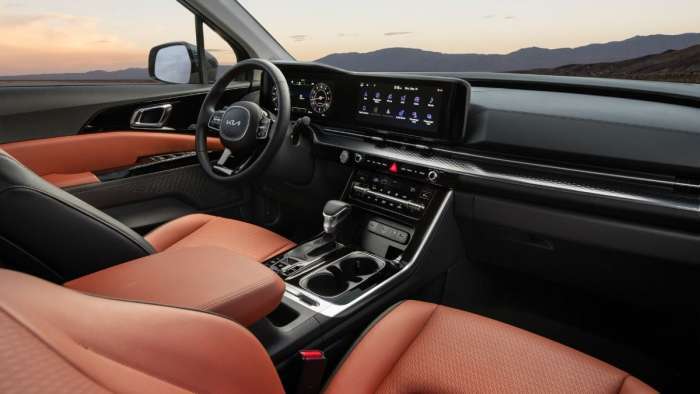 What do you think? Is an HEV Carnival worth anticipating? Is it all electric or no sale? Please leave your questions and comments below.