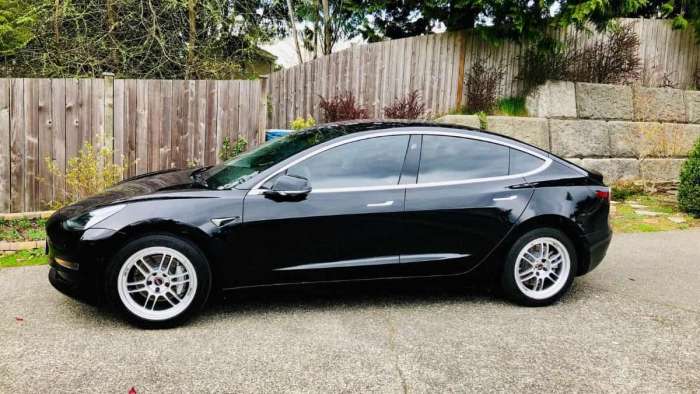 I am the original owner of one of the first 5,000 Tesla Model 3 electric vehicles that Tesla made. My Long Range RWD Model 3 was built in April 2018 and I took delivery in May that year. After almost four and a half years and nearly 37,000 miles, my Tesla is still capable of exceeding 300 miles on a full charge.
Advertisement

You may have seen other articles about how well Tesla’s batteries hold up over lots of miles (hint: they hold up well), but my Tesla actually has low mileage on it (thanks pandemic, and now my new work from home situation!). Thus, I think my battery life story is kind of interesting because its age accounts for any difference in my range more than anything else. I don’t live in a hot area, I only rarely use superchargers (like the drive I took from Seattle to San Diego and back last summer), and I rarely charge to more than 80% full. In my first electric car, a 2011 Nissan LEAF, after four and a half years I had lost around 20% of the battery’s capacity (and by the time I sold it two years later it had lost about 25% of its original range).

But let me add a caveat: in order for me to get about 300 miles of range in my Tesla Model 3, I need to drive it in certain ways and under certain conditions. I can’t just charge it to 100%, jump on the interstate and cruise at 85 MPH without ever slowing down or stopping and expect to go 300 miles before the battery is used up. No, quite the opposite. In order to test my current, real world range I am performing a series of tests to see what kind of range I might expect in different scenarios. My first test: 10 days of errand running, commuting, and other short trips (nothing over about 30-40 miles on a single drive), on a single charge in a warmer than normal September in and around Seattle, WA. Warmer than normal here means temps in the upper 70’s to low 80’s Fahrenheit. 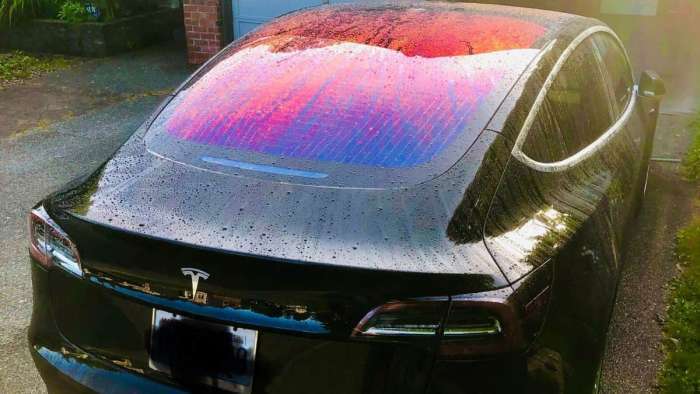 Note I ran the battery down to 20% and I started from an 80% charge, so that’s another caveat for this test. My wife and I both drive the car, so technically we put 159 miles on the odometer during this first test and used 34 kWh according to the car’s Trip display (for an average of 212 Wh/mi, or 4.7 miles per kWh). We also lost at least a few kWh of the battery’s charge to “vampire drain” sitting in the garage and or running the pumps and fans to cool off the battery on hot days after returning from a drive. Doing some simple math, if we had used 100% of the battery’s charge, getting about 4.7 miles per kWh on average, and hadn’t lost any range to sitting in the garage, then I calculate we would have gotten at least 283 miles on a full charge (159 miles * 1.666 + about 18 miles from 4 kWh not lost to the vampires). But that’s on the conservative side because that would come out to roughly 60 kWh of usable battery capacity, and our Tesla model 3 had an estimated 73.5 kWh of usable capacity when it was new. It certainly doesn’t have that much usable capacity now, but I don’t expect it has lost more than 7-8 kWh of capacity so far (or around 10%). Thus, I think a realistic worst case estimate of the maximum range we could have gotten, driving the way we did for this first test, if we had started with a 100% charge and driven to 0% in the span of a day or two, would have been about 307 miles.

But wait, you say, you’re cheating with your fancy math! Well, maybe, but only a little. The point is, naysayers, that in this scenario most of the driving we did was at lower speeds. Slightly less than half of it was done on the freeway, but even so, traffic is so bad around Seattle the average speed of our freeway driving was only about 52 MPH as best I can tell. The rest of our driving was on suburban roads and neighborhood streets, and there our average speed was more like 30-35 MPH, which means our combined average speed over those 159 miles was likely somewhere around 40-45 MPH. No wonder!

Here’s a few other details that may be of interest or worth further discussion in the comment section: We are still on our original set of factory installed Michelin tires and they are roughly at or just past 50% worn. How the heck did we do that you ask? Easy! First, we rotate the tires religiously (like we actually get down on our knees and pray! Ok, not really, but we do get down on our knees for this). In fact, we do this twice per year because we put snow and ice tires on for about 4 months of the year. We use studless Michelin X-Ice tires which I have found to perform very well on frosted, icy and or snow compacted roads; they sure are loud though when driving on regular pavement! So yes, we’re cheating a little again here, but in that time, we only put roughly 10,000 miles on the snow tires, so about 27,000 miles are on the factory installed tires, and with about 50% life remaining I expect they’ll make it to about 50,000 miles before needing to be replaced. I’ll have to write up one of those wildly popular “which tires should I put on my Tesla?” articles a few years from now when I actually need new tires. Except in my piece, it won’t be about getting stickier, higher performance rubber mounted. If anything it will be about getting better performance on rain slick roads and or decent rolling resistance and or quieter tires. I don’t track my Tesla, even though I do enjoy driving it hard, sometimes. Oh, I also do most of my own maintenance so far (which, besides the tires, has just been changing the cabin air filter, changing the wiper blades and filling the reservoir). I did have to have my glove box fixed when it randomly stopped staying closed and Tesla did that in my driveway while also addressing a squeaky steering column and replacing my charging port flap (which was operating fine). I’m still on my original 12 Volt battery too, though thinking I may need to have it replaced sometime in the coming year.

In future tests I’ll see how far I can go at interstate speeds, too, and we can compare the difference. I’ll also prepare for that test by running my battery down to a single digit percent first, then charging it to 100% before I set out on my road trip. Until my next test, do you have any questions for this long term Tesla Model 3 owner? Have you had different experiences with yours? Please leave your comments and questions below.

Tesla Contemplates A New Strategy for China Retail even As Sales Boom
Jay Leno on Elon Musk & EVs: “I Think He Should Get ... Credit"
END_OF_DOCUMENT_TOKEN_TO_BE_REPLACED