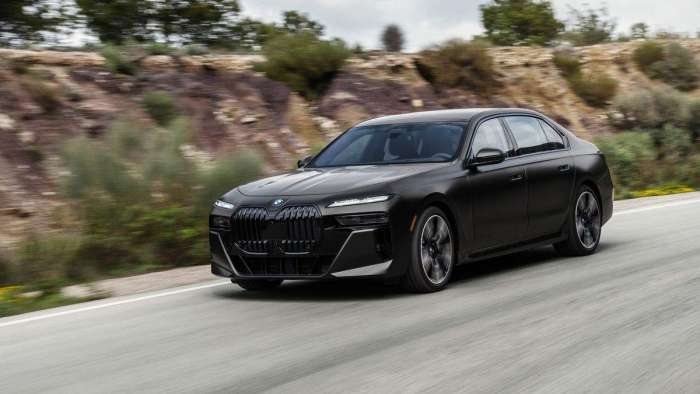 The wraps are off of the new BMW 7 Series revealing a striking flagship with a heavy focus on connectivity, entertainment, and comfort technology. With its sights set firmly on sustainability and digitalization for the seventh-generation limousine, BMW uses a range of natural and recycled materials as well as green energy to power its 7 Series/EV plant in Dingolfing, Germany. Aimed at buyers who place value on "meeting challenges in a responsible manner," the 7th-gen big Bimmer is the first to feature both and M and i versions. Its flexible vehicle architecture allows for buyers to choose between a traditional twin-turbo engine setup or an all-electric version for the first time ever. 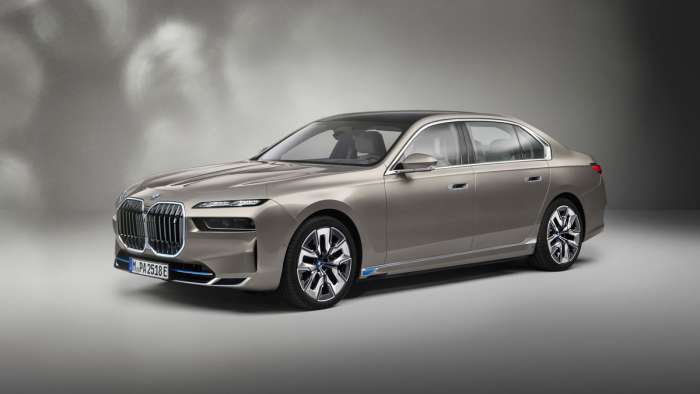 The Looks
Well, what's to say? BMW refers to the 7 Series' styling as "monolithic surface design" and we'd say that's fairly spot on. It's all angles, slabs, and squinty lights at both ends, with the ever-expanding kidney grille taking center stage up front. EV versions can be had with illuminated surrounds for the grilles, incase you think they aren't prominent enough. It's worth mentioning that BMW's designs have caused some head-scratching at past reveals before going on to age gracefully. Maybe BMW's just ahead of the curve here again. The new 7 Series is available exclusively as a LWB model with a 126.5" wheelbase with adaptive air suspension keeping everything on an even keel. 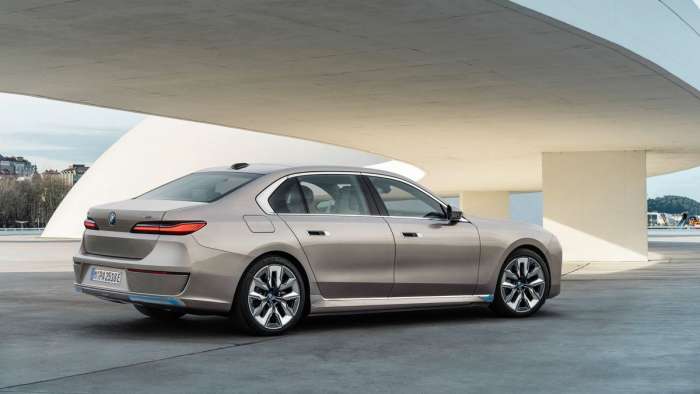 Launch Editions
Three versions will be available in the US when deliveries begin in November 2022. The 740i comes with BMW's tried-and-tested B58 3.0-liter straight six boosted by a pair of turbos and a 48V mild hybrid system for an output of 375 horsepower and 383 lb-ft of torque. The twin-turbo 4.4-liter V8-powered 760i xDrive features all-wheel drive and a healthy 536 horsepower/553 lb-ft, again assisted by a mild hybrid system with regenerative braking. Both engines have been heavily reworked for power and efficiency with new intake ports and combustion chambers for the six and a redesigned exhaust manifold with turbos fettled by BMW Motorsport for the V8. Both ICE mills are paired with an 8-speed automatic transmission. 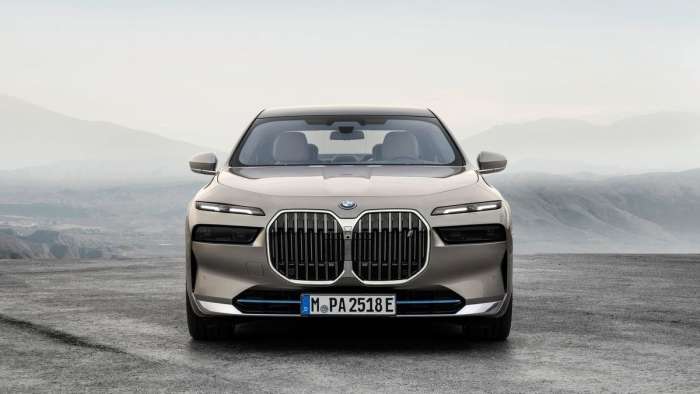 The biggest news about the new 7 Series is the fact that it'll offer a full-electric powertrain for the first time. The i7 xDrive60 features a pair of motors (one on each axle) producing 308 horsepower out back and 255 up front for a total of 536 hp and 549 lb-ft. The i7 comes with a 101.7 kWh battery pack under its floorboards and has an estimated EPA range of 310 miles to a charge. Preorders for the EV 7 Series opened on Wednesday, with the deal sweetened by the promise of 3 years free charging at Electrify America stations. 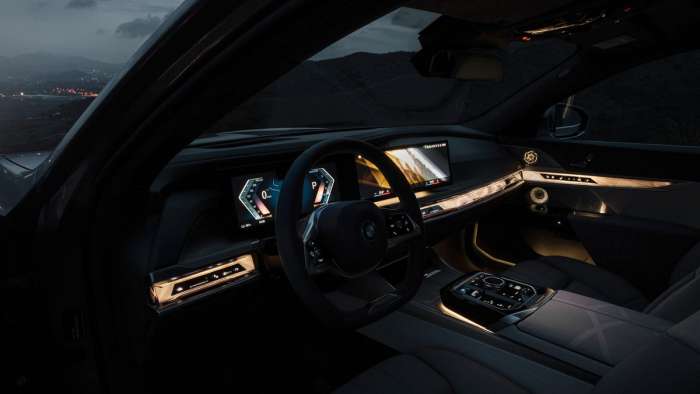 Electric Top of the Line
The eventual range-topper for the 7th generation 7 Series will be powered purely by batteries and its slated to arrive at some point in 2023. BMW promises that the i7 M70 xDrive will be the "most powerful BMW ever registered for road use" with "well over 600 horsepower" and more than 740 lb-ft of torque on tap. Like the launch-edition i7 it'll feature a pair of motors for AWD, but this one will sprint from 0-60 mph in well under four seconds.

Technology & Comfort
The new 7 Series comes packed to the rafters with features and technology designed to provide maximum comfort and entertainment for its passengers, starting with automatically opening and closing doors. Step inside and you'll find luxurious materials and features like heaters under the dash and in the door and center console arm rests to cosset occupants away from the harsh outside world. Up front "almost invisible" air vents handle climate control while the 12.3-inch digital instrument cluster and 14.9-inch central touch screen provide infotainment. The new 7 supports Level 3 autonomous driving, allowing the driver to safely take their eyes off the road so long as they're able to take back control if the situation calls for it. 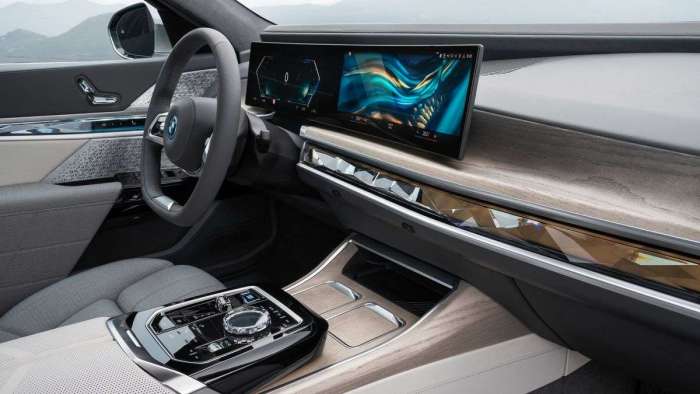 Step into the back seat and you'll find another of the 7 Series' billboard features: the 31-inch ultra-HD and 5G connected theatre screen pictured below. Rear seat legroom should be excellent thanks to the stretched wheelbase, while reclining seats are available as an optional extra. The rear doors feature a pair of 5.5-inch touchscreens which let the passengers fiddle with the entertainment, ambient lighting, and seat settings while overhead there's a panoramic glass roof with strips of LEDS embedded in it. 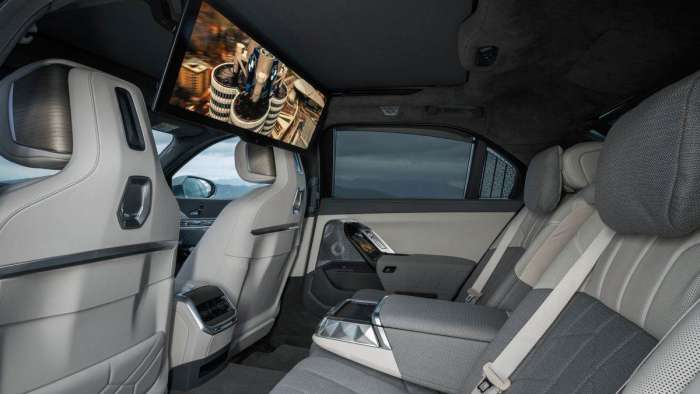 A diesel version is still to come for Europe, while China, which BMW calls its "most important sales region" in the press release, will get the EV version first followed by the PHEV versions. Will the new 7 Series age well, and how will it compete against its German and American luxury EV rivals? Time will tell, but rest assured we'll be following this one closely. 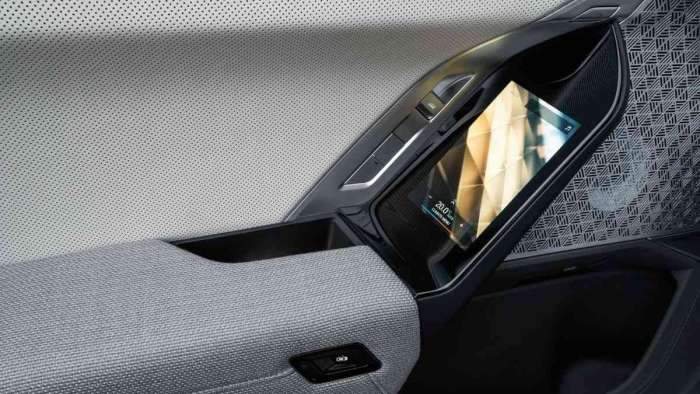