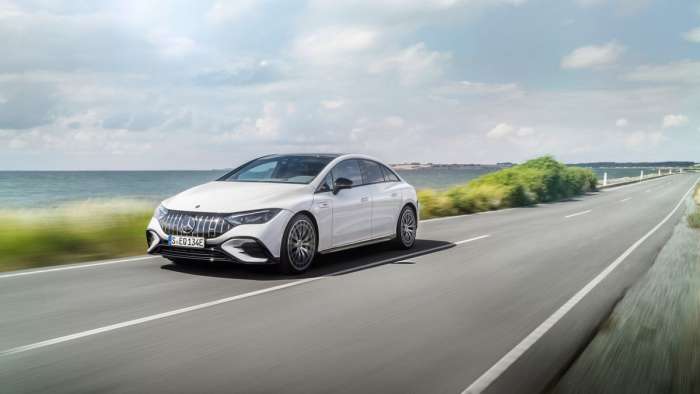 Mercedes-AMG EQE Debuts With Up To 677 Horsepower

How do you make a car stand out in a market where 500 horsepower's nothing to write home about and you're pushed along by an avalanche of instant electric torque? The AMG EQE shows what comes next for the driver's car in the age of electric.
Advertisement

AMG have long been purveyors of mean Mercedes-Benzes with flame-spitting V8s and a talent for vaporizing rear tires. If an M-Car's for lap times and an RS Audi's for blasting the Autobahn, an AMG's for scaring children and graffitiing asphalt with fat number 11s. So how on earth will this translate to the fast but comparatively serene world of the electric vehicle? Well, the tuned-up version of the EQE is here to show us how AMG's going to be doing things for the next little while. 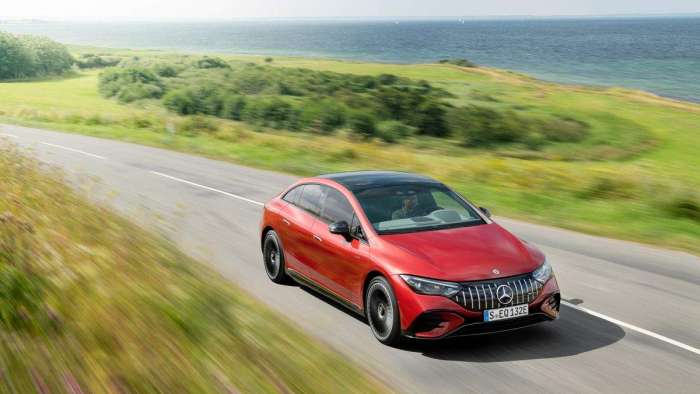 Some things never change, and in this case those things are a healthy bump in power and upgrades to suspension and braking.

The normal EQE will debut next year as the electric alternative to the E-Class. For now it looks like the base model will have a single electric motor on its rear axle with 288 horsepower, while the all-wheel drive version will produce around 400. The AMG car will use the same 90 kWh battery pack as those two, but thanks to AMG-exclusive e-motors the car is boosted to 617 horsepower at minimum. As always, there's a best-of-the-best *plus* version, and that takes the form of the Dynamic Plus Package which bumps output to 677 horsepower and 738 lb.-ft. of torque. The AMG uses a single-speed transmission and comes with rear-wheel steering as standard.

Performance Upgrades
AMG have done much more than overclock the EQE's motors, with a host of powertrain and handling upgrades taking place under the skin. The EQE's adaptive air suspension is stiffened up for better cornering, while the power delivery is biased further towards the rear tires. Speaking of rear tires, they'll be wider that the ones at the front; a first for an AMG EV and telling of the enhanced EQE's commitment to performance over all-out efficiency. The brakes are huge (16- and 15-inch front and back), and carbon-ceramic rotors are available as an option. The cooling system also gets an upgrade to deal with the extra heat.

0-60 mph takes 3.4 seconds in the AMG EQE or 3.2 seconds with the Dynamic Plus Package, and top speed is limited to 137 and 149 mph respectively. Of course all this power doesn't come free, and the AMG EQE will have a lower range than the garden-variety EQE. Mercedes estimates between 275 and 322 miles. 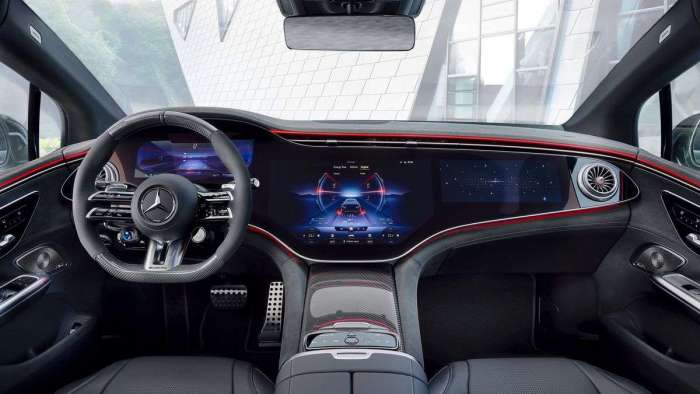 Visual Upgrades
In the modern age of eking out every single mile it's not really feasible to bolt on big bad fender flares as once was the case. The AMG EQE still looks... aerodynamic, but it does get its own sets of unique wheels and performance tire packages, as well as a blacked-out grille and rear spoiler. Sportier AMG instrument cluster graphics, a new steering wheel, and optional upgraded seats cover the visual aspects, while auditory is handled by a "sound experience" function which makes noises through the speakers when the car is turned on and while it's driving around, approximating the sound of the electric motors as they speed up. I thought this would be a bit naff, like fake exhaust noise in ICE cars, but I found a video of it at work in the AMG EQS and I think it's pretty cool. Click here and skip to 9:06 to hear it for yourself.

Drive Modes
The AMG EQE comes with five different drive modes and stability control that can reportedly be turned completely off. At the bottom of the ladder is Slippery mode which keeps a leash on 50% of the power, while Comfort allows you to waft along with 80% of the motors' muscle beneath you. Sport mode ups that to 90%, and you get the full beans, 100%, with Sport Plus and Race Start. Each mode makes adjustments to the active suspension and governs how hard to cooling system works as well.

AMG's Electric Future
So there we have it, the second EV from AMG and a harbinger of performance cars to come. The souped-up EQE is an AMG in all but fender flares, and once battery/motor tech evolves past the need to squeeze out every drop of range I bet those will return too. AMG's reportedly working on a couple of standalone EV offerings, and if those are purely for performance who knows what kind of monsters we might see. Future-electric SLS anyone?

What do you think of the sound experience functions? Let me know in the comments below, and thanks for reading.