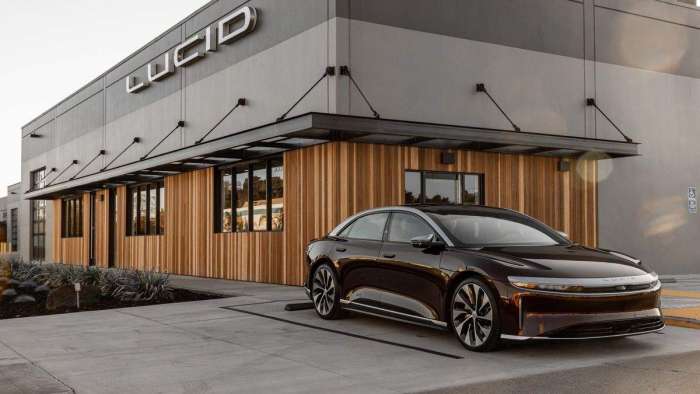 The past couple of years have been extremely tough for the auto industry and the skyrocketing prices of new vehicles reflects that. Here's how Lucid's sales model eliminates a major headache for new car buyers, and how the big guys are pushing customers towards a new Lucid Air.
Advertisement

It's fair to say that the Covid-19 pandemic has been disastrous for many global industries, but especially for car companies because of the way they've been strangled by parts shortages and idling factories. GM alone saw revenues decrease by 40% last year, and the General's not alone in its misery. Thanks to a shortage of semiconductor microchips the global auto industry is estimated to have lost a colossal $210 billion in 2021.

Chip Shortages and Covid
When Covid hit and the car industry had to slow right down, demand for chips skyrocketed from the electronics sector. With people around the world forced to stay home there was a huge uptick in sales of phones, TVs, computers, games, and other home electronics that use chips from manufacturers that also supply the auto industry. By the time auto manufacturers were ready to being building cars again in the summer of 2020 most of the world's microchip production as well as future production contracts were spoken for by the more lucrative electronics industry.

There was also a factory fire at Renesas Electronics in Japan which hit Ford particularly hard. It would be six months before the factory returned to pre-fire production levels. Of course, it goes without saying that Covid forcing the closure of chip factories in the major productions areas of China, Taiwan, and South Korea only made the precious chips more scarce.

Another issue for the auto industry was the fact that vehicles were being designed as if there were an unlimited number of chips available leading to many of the tiny but vital components being used for small individual purposes in a vehicle, from brakes and transmission control to adjusting the lumbar support in a power seat. Future designs will rely less on individual chips controlling every little function.

Dealer Markups
The upshot of all these supply problems and Covid shutdowns is fewer vehicles for customers to buy, and, as a result of the high demand and low stock volumes, the much-despised practice of dealer mark-ups. Such mark-ups have always existed, because the dealer buys the vehicle from the manufacturer, and then needs to turn a profit, but Covid and the resulting chip shortage have seen mark-ups soar to dizzying new heights. With fewer units to sell and more people wanting to buy, dealers across the industry have been adding eye-watering mark-ups to the price of new vehicles. 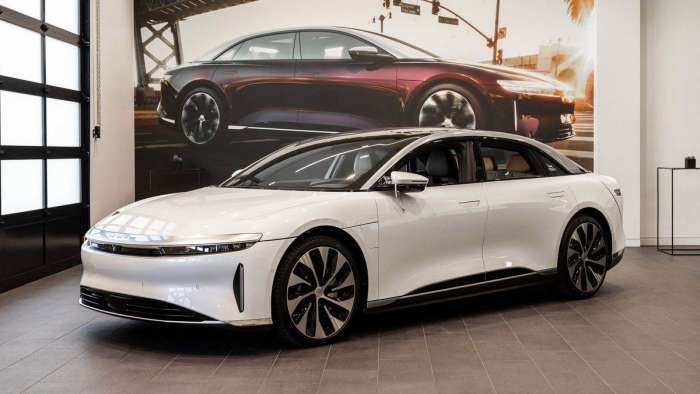 Lucid's direct sales model is the antidote to this problem.

Video creator Jon Rettinger, who provided Lucid fans with videos of the over-the-air updates received by his Lucid Air Dream Edition, was actually trying to buy a Mercedes EQS and had one reserved at a dealership when he received a call informing him that there would be a $50,000 mark-up on the vehicle's $119,000 MSRP. He said no thanks, and headed over to Lucid to buy direct from the manufacturer and avoid such price hikes.

Here's a story. I was originally going to get a @MercedesBenzUSA EQS 580. Even had one reserved and ready for pickup. The dealer called to inform me there was a $50k (not a typo) markup on the car. I passed. Infer what you will about the dealer model protecting consumers. https://t.co/XIbzdzB5CX

Guess Who Hates The Direct Sales Model
If you said car dealers you'd be right. Dealers have been part of the buying process for decades and can be a powerful political force when they want to be. By putting pressure on state lawmakers some dealers' organizations have been able to outlaw direct sales entirely, while others make it possible though a hassle for the manufacturer. Tesla took a lot of heat from legislators and dealers' unions when it became the poster child for direct sales, though this has eased somewhat since. Rivian also sells vehicles direct-to-consumer.

Whether you're for or against the direct sales model for vehicles it's undeniable that a $50,000 mark-up would be enough to push all but the most fanatically dedicated customers away from a company and into the arms of a rival that doesn't hit them with similar mark-ups. With EVs growing ever-more favored as the personal transport of the future, and the newer EV companies selling direct-to-customer, legacy manufacturers will need to do something about the situation or risk falling behind to the new kids on the block. For now, as Mr. Rettinger was told by a Mercedes rep when he reached out to inform the company of the outrageous price hike, manufacturers are legally powerless to dictate a dealer's price for their vehicles.

Tim Jackson wrote on January 19, 2022 - 12:20pm Permalink
Nobody would want to pay $50k extra for a new car, that is for sure. What Jim Walker conveniently omitted from the article is that price hikes like that are few and far between. They are, as the saying goes, the exception versus the rule. According to JD Power PIN data research, that covers millions (5m+ /year) over 98 percent of new cars were sold at or under MSRP through those same dealerships in 2019. While no one likes paying over MSRP< it seems everybody likes paying under MSRP. And many more more new cars and light duty trucks are bought under MSRP than over, even in this Covid-19, microchip-shortage, anemic inventory market the world is in today. Since Jim brought up Jon Rettinger''s deal on the Lucid Air (which seems like a very nice, but very expensive car), he maybe should note Mr. Rettinger required remote mobile service on the Lucid Air no less than five times in the first five weeks of ownership. Hopefully the Mercedes EQS and any other other car being offered by dealers is more dependable than the Air and could by not only five weeks but maybe five months or even five years before needing that level of service. If you are paying north of $150k for a new car, there should be a reasonable expectation of no need for service calls within a reasonable amount of time of service. Torque News is usually more balanced and more complete than this report by Jim Walker. We hope for better. Tim
Rich wrote on January 21, 2022 - 3:02am Permalink
@Tim Jackson I should hope that a $50k markup is the exception rather than the rule! Point is, it's kind of ridiculous that there is even 1 example of that kind of dealer markup. This problem doesn't exist with direct mfr sales. How does making mention of 5 service calls make this a poor article? Because that's what your imply.
Alfredo E Sanchez wrote on January 20, 2022 - 11:36am Permalink
If we're to reference Jim Walker's personal experience with his Lucid Air needing mobile service 5 times in the first 5 weeks of ownership, how is it any less apropos to also view his buying experience at Mercedes and the 50k markup he was asked to pay? You can't have it both ways, N'est-ce pas? Dealer markups as of this post are rampant despite growing inventories. This has been my experience while shopping for an economy car in the northeast. Additionally, I think it would take me about 15 minutes to find anecdotes of new owner experiences with the Mercedes brand that would paint a not so rosy picture.