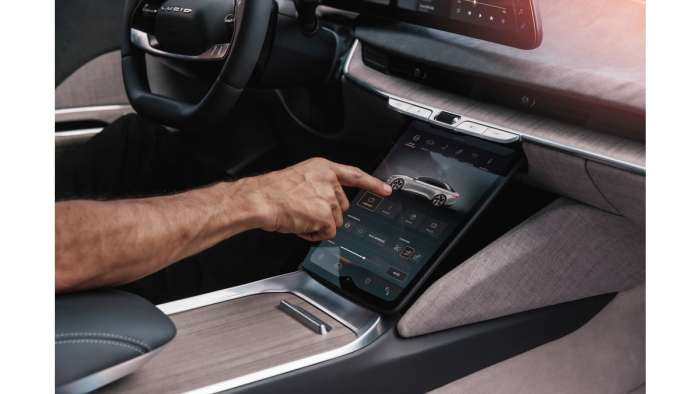 Lucid's First Over-The-Air Updates Are Rolling Out, Here's What They're Doing

Videos from Lucid Air Dream Edition owners show us how the OTA update process works and which aspects of the Air said updates have been fixing or improving.
Advertisement

There have been three OTA updates sent out from Lucid to the lucky first recipients of the award-winning Air Dream Edition so far. As we can see from these videos posted to Twitter by video creator Jon Rettinger (@Jon4Lakers), the first update revised the Air's electric power steering system, while the second was the fix for the Lucid's charging port door potentially closing on its own with the charge cable attached, as well as fixing a bug in the key fob that "affected passive unlock and keyless entry."

Update Number Three
The third update is the one Rettinger filmed, and his videos show us how the update process works. It asks that the car is unplugged and not connected to WiFi before commencing the update, and promises that more updates are to come in the next several days. This update fixes a small issue where the Air would display a redundant light fault notification on the dash when no such fault exists.

What an update looks like on the @LucidMotors Air. pic.twitter.com/gEVZbVdmpP

Here's a still from @Tesla2Lucid with a close-up of the update's release notes.

DreamDrive Updates To Come
Lucid's advanced driver-assistance system, known as DreamDrive, comes standard on every Dream Edition Air, but owners who have taken delivery have been reporting that some of its functions are not yet available. Features that are missing include automatic emergency braking, lane-keeping functions, and traffic sign recognition, though Lucid says that these but will be brought online by OTA updates in the near future.

Lucid gave the following statement to Roadshow regarding the DreamDrive features:

"Thanks to our ability to deliver software over-the-air and with key hardware already in place in the vehicle, many of the systems in the Lucid Air are designed to grow over time - including the DreamDrive suite of advanced driver assistance systems. While core DreamDrive functionality was already included in recently delivered Lucid Air Dream Editions, Lucid this week contacted initial Air Dream Edition customers to remind them about an upcoming over-the-air software update that will add additional new features to the DreamDrive suite. The rollout of these features is consistent with what Lucid discussed with these customers before they took delivery of their cars."

Small updates to brand new cars is nothing new, and Lucid's (plus the wider EV market's) ability to provide these updates over-the-air should allow the process to be handled more conveniently and quicker than ever before. As soon as more information about Lucid OTA updates becomes available you'll be able to read about it here at Torque News.

Cover Image by Lucid Motors licensed by CC BY 2.0.