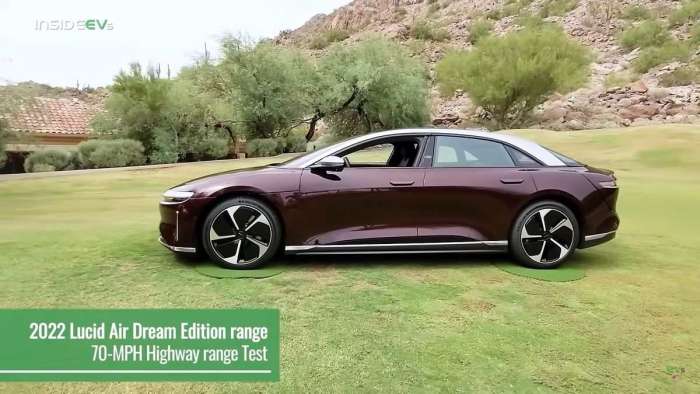 From a 100% state of charge and using adaptive cruise control the Lucid Air averaged 4.3 miles per kWh and drove for a further six miles after reaching 0% charge remaining.
Advertisement

This test comes to us from InsideEVs with the Lucid Air being the latest in a long line of EVs to take on the highway range challenge. Tom Moloughney, who provided us with this video of a Lucid Air charging from 0-100%, was at the wheel for the Air for the most recent running of the 70 mph highway range test. The previous leader was the 2021 Tesla Model 3 with a range of 310 miles.

The Car
Lucid supplied InsideEVs with an Air Dream Edition with the Range configuration (as opposed to Performance) which got the Air its headline 520-mile EPA range rating. The test car was fitted with the 19-inch Aero wheels for maximum range, as there's a drop to 481 miles with the 21-inch wheel option installed. The tires were inflated to the manufacturer-recommended 49 psi and, like in all the other testing, the climate control was set to 68 F.

The Air put into its longest range "Smooth" mode and charged to 100% at a DC fast charger, which, along with the Lucid's on-board battery conditioning functions, served to warm the battery to optimal operating temperature. The speedometer was tested against GPS speed tracking apps and found to be slightly fast, with 70 mph on the Lucid's dash reading as 68-69 mph on the other devices. With this in mind the Air's cruise control was set to 72 mph and the test could begin.

The Test
The range test took place in Scottsdale, Arizona and was the third attempt after the first and second were cancelled by inclement weather and Tom coming down with Covid. This time conditions were more favorable, with a slightly chilly starting temperature of 51 F warming up to a more range-friendly 69 F by the end of testing. The Lucid was driven onto the highway as soon as charging finished so as to avoid muddying the results with stop-start city miles.

Results
The ultimate result of the test was a range of 500.1 miles and from the sounds of it the team got ever inch they could from the Air, driving for a further six miles after the battery read 0% charge remaining. The test was finally called to an end when the car became unresponsive and hesitant to accelerate before heading to the nearest fast-charger.

Range throughout each quarter of the battery's charge was fairly consistent with the worst result of 120 miles coming from 100-75% charged. After that, the Air managed 128, 126, and 126 miles for the other quarters. The Lucid travelled 4.3 miles per kWh for the vast majority of the test, falling to 4.2 only a couple of times throughout. All told, the highway range test used more than 117 kWh of the Air's 118 kWh battery capacity. 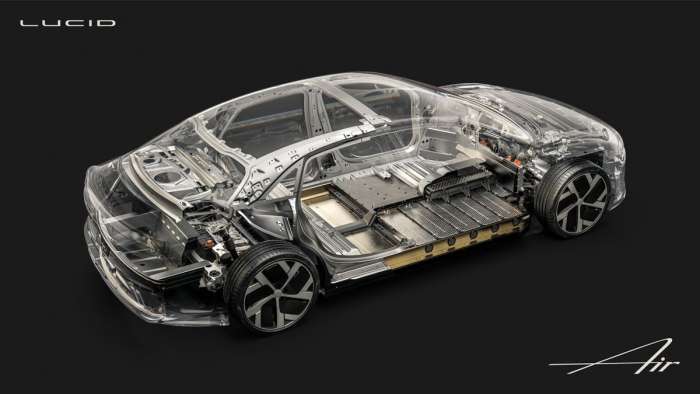 InsideEVs is careful to include a disclaimer that factors like weather and traffic can affect the results of their real-world testing, but they take every step they can to ensure the same testing conditions for each vehicle.

Images by InsideEVs and Lucid Motors licensed by CC BY 2.0.