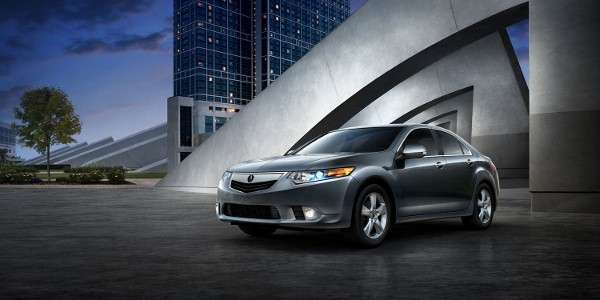 We bid a fond farewell To Acura’s TSX. Unfortunately, 2006 was the best sales year for the European Accord’s first cousin. We believe that TSX deserves a final test ride and review, still an exciting performance sedan.
Advertisement

10 years on the line, Acura sends TSX to the halls of Honda history.

A good run for any car model, TSX enjoyed its greatest popularity 3 years after its initial introduction in 2006. That was the year that Peter Cunningham and Real Time Racing took a race modified TSX and won the coveted Speed World Challenge. Acura TSX sales went to 38,035, the highest volume year for TSX sales.

The worldwide recession took care of sales momentum. Although Acura continued to upgrade and refine the TSX, including the option of a V6 and sport-wagon variant, TSX failed to capture the glory days of 2006, as the national and world economy slowly recovered.

In 2013 sweeping changes in the structure of American Honda Motors and the creation of a stand-alone Acura Division resulted in consolidation of Acura’s luxury performance sedan offerings.

For model year 2015: Gone will be the iconic TL and Japan manufactured European Accord sized TSX. In its place will be a melding of the TL+TSX=TLX, Acura’s formula for success.

Acura’s newly designed and engineered TLX will change the way the world perceives “ Made in America” performance sedans.

The test drive: Thanks to our Friend Paul Casey of Kendall Honda, Acura of Eugene, we had the opportunity to revisit a fresh 2014 TSX sedan with 50 miles showing on the odometer.

Our TSX was a white on black 4 door featuring the 2.4 litre DOHC i-VTEC 4 cylinder, 5 speed automatic transmission and technology package. Producing 201 hp and 172 lb-ft torque in the mid rpm range, we found the Sequential Sportshift Automatic to be surprisingly responsive.

Note, we had just exited a 3.5 liter V6 powered TL moments earlier and found the downsized and less expensive TSX to be superior in more than one driving aspect.

Paul took a calculated risk when he handed over the keys to the TSX and told us to enjoy and take our time with the car. Dropping into the car while adjusting seating position and mirrors, a feeling of instant gratification swept through the cabin as brain neurons fired off memories of performance rides past. While not as large as the North American Accord platformed TL, the Euro-Spec Accord TSX has a BMW 3 interior spatial familiarity with Acura-tech-rich yet understated flair.
The ergonomics of this mid sized Japan built metric tuner is perfect.

At 6’5”, this driver was uncompromised in seating position, leg placement, control access, shoulder and headroom. As per Acura specifications, we did find the seating to be quality but a bit stiff in the bolsters and lumbar support. We would expect this to wear in a bit. The interior fit and finish is flawless. We do like the placement of the navigation and infotainment monitor but didn’t play with it on this drive.

You won’t find a keyless ignition in the TSX, or at least, we didn’t. None the less, turning on the engine we were surprised by the initial quiet exhaust note. Thanks to engine counter balancing, vibration was negligible, as was side torque on the depression of the loud pedal. Pulling off the lot in normal mode we noted the TSX 2.4L to be very civilized.

Opportunity knocking...With a MSRP of $30,639. Paul looks at the TSX as an affordable “Family” car; could be. With dealership discounts and factory incentives, this car will retail out the door for less than a fully equipped 2014 Accord with full technical package.

Not wasting anytime with this ride, driving 8 miles southwest of downtown Eugene, you’ll find the outbacks of Western Oregon’s Wine Country. We live there and love the driving opportunity afforded us by Oregon’s well maintained rural highways.

Damn quick and nimble: Dropping the “F” bomb through the “S” sweeps became a frequent incident, as high performance road handling is second nature to Acura’s performance sleeper. We forgot how much fun driving could be in a mid-level executive performance sedan.

Soon discovering that brakes were not needed on the TSX at under 40 mph, we pushed the car to its limit on the 20 mile loop of Oregon back roads.

For 2014, Acura engineering has eliminated the earlier noted response lag in the electronic “drive-by-wire” accelerator. While driving aggressively, sequential paddle shifters and “grade logic” work in perfect unison with the high revving Honda K24Z3. This thing comes to life just were you need it. At 4800 rpm, this engine hits the sweet spot. That’s where the K24 gets loud and refinement gives way to “E” ticket excitement.

Acura has dialed in the handling characteristics of this midsize performance, executive sedan. We found little to no under or oversteer, front end diving, side sway or over-braking while pushing the TSX hard. We found the electric steering to be responsive as well as intuitive.’ One feels the road’ through the fingertips, is how Acura states it. Again, tech meets function as electronically distributed ABS works perfectly without noticeable fade.

We can’t overstate the performance nature of this well priced, Japan quality built performance sedan. While not in the engine performance category of the exiting TL, we believe the handling characteristics of the TSX to be superior and hope that the 2015 TLX will retain TSX handling prowess.

Granted, the car was new and didn’t have the benefit of of break-in period or shakedown run. None-the-less, we found no throttle lag, hard brake or suspension fade while putting the TSX through its paces.

While we’re not in the business of selling Acura…

Acura and your local dealer is now offering special purchase and lease incentives on the 2014 TSX. We find the car to be a $ bargain in its segment. Unlike the Civic Si Coupe, you can place groceries, friends and family in the back seat.

This week we wave a fond farewell to the iconic TL. look for this review here. TL+TSX=TLX

Parks McCants wrote on July 20, 2014 - 10:40pm Permalink
Great little performance sedan. If you own one, we welcome your comment( positive or negative here.)
Shaq wrote on July 21, 2014 - 9:30pm Permalink
GREAT FAREWELL REVIEW! I love my 09 TSX but its time to move on to something bigger and "Better". Im leaning towards the TLX preferably the V-6 model. please let us no how the test drive goes! the dealer where i live dont even know when they will be receiving them smh
Parks McCants wrote on July 22, 2014 - 9:35am Permalink
Morning Shaq. We expect the TLX to begin showing up on the East Coast in the second week of August. We'll keep you posted. Thanks for dropping by.
Frank Snee wrote on July 21, 2014 - 3:47pm Permalink
I own the V6 variant of the TSX. While it doesn't initially feel as nimble as the 4cyl TSX, it handles well and the V6 can get out its own way with authority. I think a slightly larger interior TSX should be perfect, and that is what the TLX will be. Unfortunately the TLX doesn't have the muscular stance of the TSX or the sylish risk of the current TL. I do look forward to test driving a PAWS and SHAWD TLX.
Parks McCants wrote on July 21, 2014 - 5:41pm Permalink
I'm sure the V6 is a kick to drive. As to style and size, we're on the same page. I look forward to driving the TLX next Tuesday in Virginia. We'll report on the car Aug. 4th. Thanks Frank.