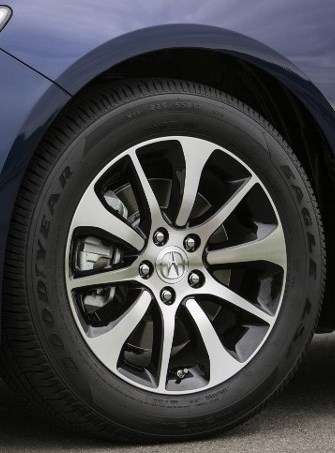 We look to 2015 TLX engineering for a class leading ride, comfort and quiet interior. New generation rims, lighter brake assembly and tire technology takes the stiff ride and tire bounce out of TLX; they’re superior to Lexus IS 250
Advertisement

What Acura has done with TLX is develop a class-leading mid size sports-sedan with touring car comfort and quiet; not an easy task. Acura engineering invested 5.5 years of R&D into TLX before releasing “ Acura’s next big thing” to the driving public.

Torque News was one of the first to drive 2015 Acura TLX in West Virginia horse and wine country. While we attended the National Automotive Press TLX roll-out, we drove the competition. We found Acura TLX i4 with P-AWS and V6 SH-AWD to be superior in overall quality and ride to BMW 530-1 and Lexus ES 250.

Within the Acura line: For timely comparison, we drove the exiting TSX and TL the week before. While TSX provided rocket acceleration and slot-car handling, we found the historically correct Acura suspension to be exceedingly stiff, hard on the neck and interior noise level approaching the wing section seating of a Bombardier regional commuter jetprop.

Kicking TSX to the side of the road we took the wheel of a 2014 Acura TL. The variant we drove offered Acura’s state of the art 3.5 Liter V6, a responsive automatic transmission and FWD. While our 2014 TL was responsive, quick and comfortable, it tended to pull to the right on launch, and featured a bit of rear axle assembly bounce and road noise generation; again, not bad, just short of top of class. Acura engineering has eliminated these tendencies in TLX.

It’s amazing what small changes can achieve in the overall comfort, handling and interior noise level of TLX.

By reducing the road noise transference of the tire rim, changing the compound of the tire, reducing the disk brake assembly(deadweight) by 8+ pounds while increasing suspension dampening, Acura engineering has measurable decreased tire and axle bounce, reduced cabin noise and improved handling. When driving Acura TLX one can feel and hear the difference.

While brand loyalty is often preference driven, we believe that 2015 Acura TLX represents a greater purchase value than Lexus IS 250 in an increasingly competitive automotive segment.

Mark Day wrote on October 22, 2014 - 11:55pm Permalink
A good comparison for the TLX, with probably a lower price, would be the 2015 Camry XSE V6.
Parks McCants wrote on October 23, 2014 - 12:53pm Permalink
No doubt, Toyota builds a quality product. However, they don't offer Power Assisted All Wheel Steering as standard feature, nor do they build a sedan with SH-AWD and 9 speed automatic with paddle shift. Drive both cars and get back to me with your views. Thanks...