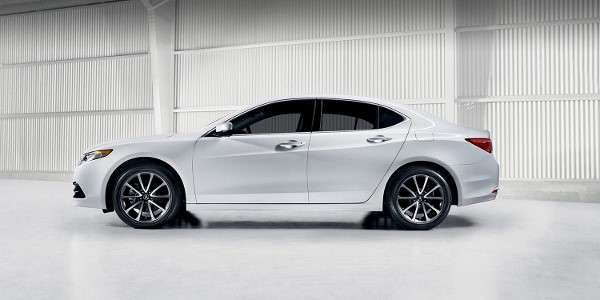 While that may be a heady statement, 2015 TLX in its first full month of production is set to break the record books.
Advertisement

On Wednesday American Honda Motors released September sales numbers. TLX in its first full month of production has elevated Acura division sales by 18.8% and is positioned to place Acura sport sedans at the top of the segment.

I’ve had the pleasure to meet Mike Accavitti Acura’s senior v.p. and general manager. Mike is a no-nonsense car guy that cut his teeth on Detroit motorheads. Mike may be optimistic, but from where I sit, he’s as unexcitable and calm as a billionaire trading penny stocks. Mike says this about TLX sales numbers: “TLX is proving to be the knockout punch we've been looking for in the luxury sedan arena, the TLX is attracting so much attention online and showroom traffic at our dealers that we don’t yet know the car’s true potential.” say’s Mike…

Granted I’m one of those automotive journalist sparking the TLX frenzy online. Nonetheless, collaborating feedback from Torque News readers and now TLX owners, tells us that the car is as we stated: “Acura’s next big thing.” And yes, it’s that good! You may read our latest TLX review here.

The bottom line is this: TLX offers more standard featured comfort, utility and performance than a comparable class BMW, Lexus or infiniti. For those looking to Chrysler 200 to compete toe to toe with TLX V6 SH-AWD, I’d like to know what your smoking. Apples to apples, they’re not the same car.

We’ve had a few readers scoff at the performance aspect of the TLX i-4 with P-AWS. Again, until you test drive one, please hold your comment. Bottom line: For a handful of duckets more than you’d pay for a fully loaded 2014 Honda Accord, you may purchase a well equipped 2015 TLX 1-VTEC direct injected dual stage inducted, 206 hp, automated 9 speed transmission with paddle shifter and power all wheel steering.* starting at MSRP $30,995.

Oh, and did I mention, one of the best stereo systems and driver’s seats in the industry. Next Monday we’ll be taking delivery of a 2015 TLX V6 SH-AWD with Advance Package. look for a detailed review midweek.

geek wrote on October 2, 2014 - 3:44pm Permalink
I have now owned and driven my TLX I-4 for 2 weeks and the car is commendable and a pleasure to drive. The TLX does not lack for and suffer from a lack of pickup or power to merge, pass or cruise. I put the car through its paces on a couple of windy back roads just for fun (doubt I will ever do that again) but not because it was not a great driving car, but frankly it is not how I normally drive. How the PAWS factors in to how well the car drives I do not know. What I do know is the car is exceptional. I don't get paid to do reviews for a living and don't have an editor telling me what I should say to attract attention. I can tell you that the TLX is an excellent car.
Parks McCants wrote on October 2, 2014 - 4:54pm Permalink
Welcome back geek. As an independent(freelance) journalist, no one tells me what to write. My review is based on the driving experience of the car and how it compares to the competition. Thanks for chiming in. Yes, I know, we had the TLX off of the pavement more than once in aggressive driving. Enjoy!
Geek wrote on October 2, 2014 - 9:20pm Permalink
Parks, I certainly was not questioning your objectivity. I read more car reviews than a sane person should in the car selection process, the opinions of others is often of value. It was evident to me that a degree of biases and personal preference creeps into the writing of some. What truly surprised me was the almost imperceptible driving experience between the 4 and 6 cyl. Since the AWD was not available to dealers when we were in the hunt, nor a feature that we thought essential, I cannot comment on how that affects the road handling. I enjoy your comments.
Parks McCants wrote on October 2, 2014 - 11:08pm Permalink
As a car guy with an automotive and civil construction engineering background, I do find it difficult to curb my enthusiasm. I'm excited about the low to no impact future mandated for personal transportation. I'm happy to report on what is arguably the most future forward progressive and safety focused automotive manufacturer on the planet. Oh and yes, the car looks good and is fun to drive. Thanks for droping in geek. Keep in touch...
kinetixnrg wrote on October 4, 2014 - 12:21am Permalink
Am really looking forward to your review of the V6 SH-AWD model. We have an elite version (US is advanced version) with the launch kit (inc. 19" sport tires) on order for end of October. We are replacing a 2012 TL SH-AWD and am really interested to know your thoughts on how this does replacing that and want to know how the new TLX AWD version stacks up for fun/exciting to drive. AWD for wife is a must for her so the I4 was out right away. Your reviews so far have been positive to say the least, but at the same time seem you seem generally excited about the car in a genuine way. We are not track racers so do not need insane power or cost as this is an everyday driver for my wife and me. That said, we still want this thing to be able to go a little with power and handling when you want it to. The TL does that for us and hope the TLX can do the same.
Parks McCants wrote on October 7, 2014 - 1:20am Permalink
We took order of our extended drive and review TLX V6 SH-AWD Monday afternoon. The wife was at the wheel so there was no engagement of Sport+ mode. However, what I can say is that when driven in a civilized manor, TLX is quiet, sticky and pleasurable to drive. Note: Acura has retained the TL ride( a bit stiff) and road handling. The road noise isolation, suspension dampening and dead weight wheel and tire bounce has been measurably reduced in TLX. We'll keep you posted.
Geek wrote on October 7, 2014 - 10:56am Permalink
Solid review! We took our TLX 4 tech on an extended trip last weekend, long freeway driving and back roads through small towns. We also did no aggressive driving but I suspect the vast majority of people also do not. The power band is very consistent and going through the gears smooth and essentially imperceptible. The engine never labored at 75 or 80+ (my bad) with road noise never noticeable and on the back roads the car handled very well. It will be interesting to see how the car will navigate in the roads in snow remains to be seen and would be happy if did not experience that. At the end of our 400 miles of driving my wife and I were pleased with our TLX.