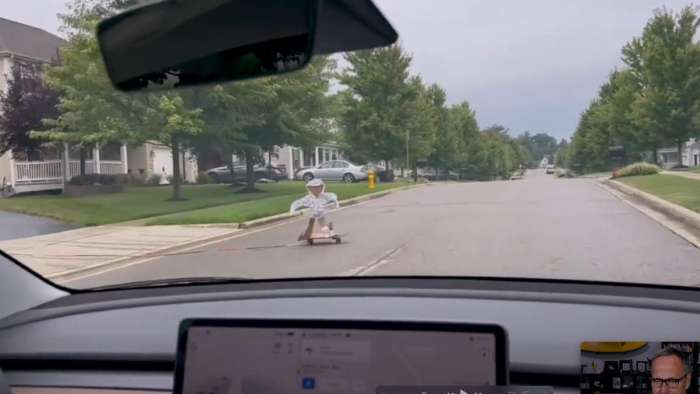 Tesla FSD Falsely Accused - What It Was About

Tesla FSD has been falsely accused of not stopping for children on the road. We have a video that debunks this and that the video ad showing this is a FUD attempt against Tesla FSD.
Advertisement

Tesla FSD Falsely Accused - What It Was About

There is some information surfacing that Tesla's FSD is dangerous and won't recognize children on its FSD system and not stop for them. This is FUD and Dr. Know-it-all Knows it all has a video that explains why.

In a recent ad, Dan O'Dowd is claiming that a Tesla using FSD will not stop for children and will subsequently harm a child on the road. Whenever FUD like this comes forward, it's important to examine all the details and facts. It's very important to break down the ad and look at the truth.

The first thing about the video is that it wasn't released in a high resolution where things are clear to see. It's like an old video of a UFO or Bigfoot that isn't quite clear to see. This is a low resolution video from Dan O'Dowd.

The thing they were trying to avoid hitting was a prop up of what looks like a cardboard child. There is a set of cones on the road creating a narrow passage. There is also a message on the video that shows a warning message on the Tesla center console that appears to be a warning that full self-driving will not brake because the accelerator is being pressed down.

When the message on the center screen was expanded, it was a message with a triangle warning symbol which means the accelerator is being pressed while FSD is engaged. That means FSD will not stop. Dr. Know-it-all Knows it all took the actual message and put it on top of the one from the video as another layer in the photo from the FUD campaign and the messages were an exact match.

After enabling FSD, Dr. Know-it-all Knows it all started driving and enabled FSD while holding down the accelerator. He got the same message that was explaining that FSD will not stop while the accelerator is down.

There are cones in the video, which puts you in a situation that the car is stuck and can't go outside the cones to swerve. The car is restricted with the cones. The car in the video also can't stop due to the accelerator being held down.

There is also another video from @tesladriver2022 of a Tesla owner doing some test videos with a fake cardboard child on the road with FSD enabled to see what the Tesla vehicle does. He enables FSD and it drives toward the cardboard child. The car slowed down and passed it on the right.

There is very visible evidence here that the car will slow down for animals, objects, children, or card board cut outs of children in the road. The video from Dan O'Dowd is a clear FUD attempt to discredit FSD by creating a narrow line of cones with the accelerator pressed to try and smear Tesla's FSD. It's good to have videos that can bring the truth to light and debunk the FUD.

For more information, see this video by Dr. Know-it-all Knows it all:

What do you think about this video and the FUD against Tesla FSD? Who is right and wrong here?

Haggy wrote on August 11, 2022 - 12:34pm Permalink
Not only that but the FSD indicator is grayed out, meaning that all that's turned on is Tesla's version of ACC. So no matter what happened, it would tell you nothing about FSD.

Tesla Contemplates A New Strategy for China Retail even As Sales Boom
Jay Leno on Elon Musk & EVs: “I Think He Should Get ... Credit"
END_OF_DOCUMENT_TOKEN_TO_BE_REPLACED