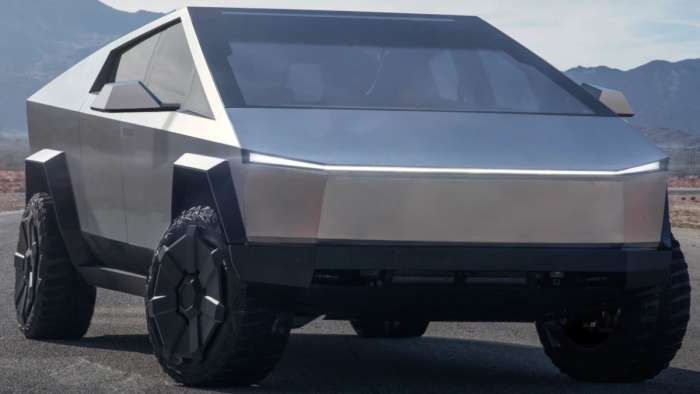 CyberTruck Mirrors Designed To Be Easily Removed By Owners

Elon Musk just responded to a Tweet saying that mirrors on the CyberTruck will be easily removable my owners. Whether this means just the side mirrors, or the front mirror, or both, remains to be seen.
Advertisement

They’re required by law, but designed to be easy to remove by owners

If this Tweet by Elon Musk is true, it means that he plans on the CyberTruck being able to drive itself without any mirrors. I'd be willing to take a guess that means he thinks autonomous driving will be ready in about a year as the first CyberTruck's roll off the assembly line.

One of the more interesting comments on the Twitter feed about the side mirrors is that they add about 5% drag (15 miles per full charge on 300 miles) - that's why the preproduction Beta Model X had them without it. Regulation forces automakers to have them, and it would be nice if they repealed it and added cameras.

I think that's a very good point as Tesla is all about efficiency. If cameras cause the car to have drag and cameras can do the job, then what is the point in having that extra weight and drag. I think it's great that Elon Musk answers questions of customers of Tesla directly on Twitter - it shows his enthusiasm and willingness to listen to others.

Right now, the mirrors in the CyberTruck will have to be put there as required by law. But once autonomous driving gets 10 times safer than the average driver, I can't see why any regulator would still require the cameras in the vehicle. Time will tell if the CyberTruck and other Tesla vehicles can be developed without the cameras.

In other related news: Tesla to Repeat Norway Success Story in France.

How Autonomous Driving Will Remove the Need for Mirrors

The reason an autonomous vehicle will remove the need for mirrors is because cameras on the vehicle will have a 360 degree view of the car. In fact, even before autonomous driving comes to fruition, I think a Tesla owner could remove the mirrors from their car and use just the UI display alone to drive and check for cars when changing lanes. I would like to see Tesla zoom out a little more on their view to make it easier to see cars at a distance.

An autonomous vehicle that is 10 times safer than a driver will be hindered by mirrors. Just the extra length the mirrors cause, which would be about a foot to 1 1/2 feet is a nuisance, let alone the drag on the car and extra battery usage. A car without mirrors has more room to maneuver and more room for error - though making errors is not something you would want to see a car at level 4/5 autonomy doing.

How Will the Mirrors Be Removed?

How will the mirrors be able to be removed by the CyberTruck? The mirrors have to be on the car in a way that they are safe and secure and can withstand some of the pressure from going 80 miles per hour with high winds. I wouldn't be surprised to see Tesla has some kind of plugin mechanism for the mirrors with a device that very sturdily locks them into place and requires the car to be on to remove them.

Then again, Tesla has the world's best engineers and I'm sure someone at Tesla is thinking of a way to have the mirrors put on with a simple automatic open and release that doesn't require the car to be on at all. Either way, after the mirrors are removed, hopefully there is a way to have some kind of cover that makes it seamless that the mirrors were ever there.

If I were Tesla, I would make the mirrors for the CyberTruck as low cost as possible. Because they can be removed, it doesn't make sense to spend more on them than you have to.

What do you think about the CyberTruck having mirrors that can be easily removed? Is removing the mirrors from a car a good idea?

DeanMcManis wrote on October 20, 2021 - 10:34am Permalink
I don't think that Elon's comment about removable mirrors was specifically about self driving capability. It was about the current government mandate for rear view mirrors, and this being a work around to satisfy regulators, but with the mirrors removable, the car's many cameras would take over mirror duties. The regulator's safety fears are that a digital camera or display could fail, which would dramatically reduce your side and rearward visibility. Realistically, the car's many digital cameras are far better than mirrors at showing outside traffic. But regulators lose nothing by being extra conservative, and slowing change. Of course Elon is also promoting Autopilot features with the mirror removal, but one big hit with big mirrors is efficiency, with the added drag of external mirrors being dramatic, and frankly it's a waste when you have better visibility with cameras.

LG's New EV Battery Plant Is a Welcome News for Tesla
Tesla Giga Berlin's New Hurdle: It's Not Only the Gov't, but Now Tesla Itself
END_OF_DOCUMENT_TOKEN_TO_BE_REPLACED