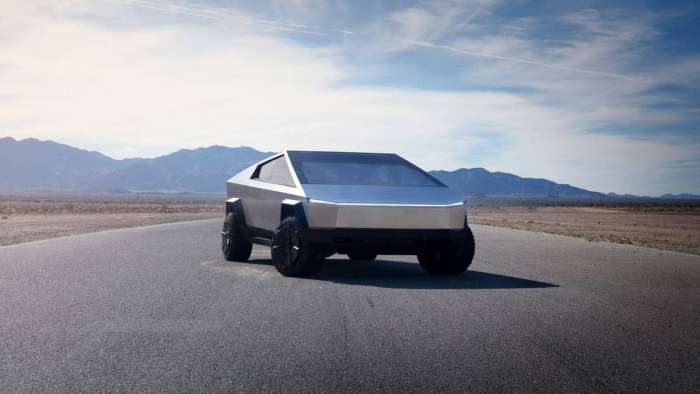 Elon Musk responded to a tweet by tweeting about Tesla’s planned design for the Cybertruck. Some of the information mentioned in these tweets has already come out, but the way Musk articulated his tweets has led to questions about what features the Cybertruck may or may not have.
Advertisement

Musk touched on some key points in some recent tweets. In the first part of his second tweet , Musk said that the production car will look “almost the same” as the show car. This has led to questions and concerns about whether the Cybertruck will have side-view mirrors. Musk has touted the Cybertruck’s four-wheel steering as well.

Related: It's Been This Many Years Since Tesla Promised the Cybertruck

The Cybertruck could be a jack of all trades

The tweet Musk commented on was questioning the Cybertruck’s looks. The reality is that the Cybertruck’s “appearance” may become more accepted as time goes on. The four-wheel steering is a game changer because that is not a feature that is usually on a pickup let alone any car for that matter. The Cybertruck will be a pickup with sports car capabilities when it comes to the most expensive trims. There have been many previous performance pickups such as the Dodge Ram SRT 10. However, the Cybertruck will have that added handling capability as a result of its aerodynamic structure. Musk expressed in his first tweet that he was proud Tesla built a truck that stood out from all the other ones.

Questions remain about The Cybertruck’s features

In Musk’s second tweet, he said the Cybertruck will look very similar to the show car. Musk did clarify that the Cybertruck will have no door handles. The car will recognize the person trying to get inside. A facial recognition system will reportedly be used, and those have a track record of being flaky. Hopefully that system won’t be too prone to issues particularly in cold weather.

The major question on the minds of many people is whether the Cybertruck will have side view mirrors. As of now there isn’t a clear answer, but it seems that it’s very possible and maybe even likely that the Cybertruck won’t have side-view mirrors. NHTSA has been asking for feedback about whether cameras should be allowed on a car instead of mirrors.

Speaking of mirrors, the Cybertruck may be better off without them but it’s hard to know for sure. Mirrors do take up a lot of space and can easily be hit when in tight spaces. The mirrors are the most pressing question right now, but there is also curiosity about how well the Cybertruck will be able to tow. A good regenerative braking system would help on those steep downhill grades.

It would be interesting to know what you would do if you were in charge of building the Cybertruck and whether you would buy one. Let us know in the comments!

Greg truax wrote on July 16, 2021 - 8:40am Permalink
Can the tailgate open sideways like the Honda Ridgeline?