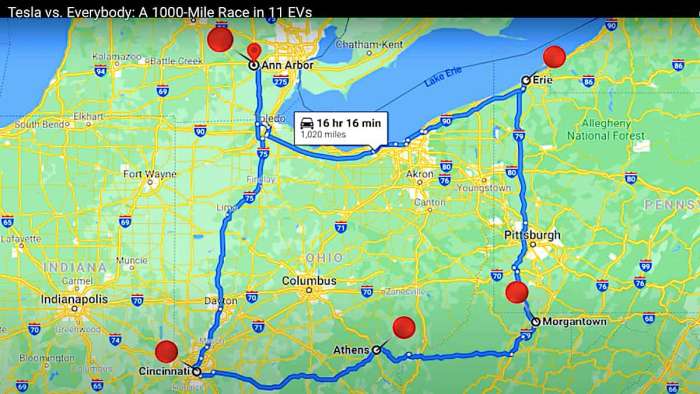 Call it a “non-race race” if you will, but pitting 11 popular EVs against each other in a four-state 1,000 mile loop, and you’ve got an event worth watching. Check out this YouTube video that shows how Tesla actually does against other EVs when it’s not ludicrous speed performance that counts, but the electronics controlling its power, the difference in charging rates between vehicles and charging stations…and smart decision making.
Advertisement

Dubbed “The EV 1000” the opponents pushed their vehicles, their apps and their organic neural processing centers to their limits as they decided their best laid plans of how to outperform each other making their way through a loop consisting of mandatory waypoints coursing through Cincinnati; Athens, Ohio; Morgantown, West Virginia; Erie, Pennsylvania; and Ann Arbor.

The purpose of this non-race race was to see where we stand with the current EV tech and charging station infrastructure by pushing selected EVs well past their single charge limits while discovering what it is like to road trip in an EV.

As such, to squeeze as much energy as possible per charge some drivers limited their AC system operation during hot weather conditions, and took some race-killing chances by attempting to drain their batteries as much as possible in order to benefit from fasting charging at their next stop.

So as not to spoil what resulted from the race, here is a YouTube video from the Car and Driver YouTube Channel that discusses the race and the few surprises the drivers found along the way:

If this was not enough to get your motor running today, check out these selected articles with videos showing last year’s Tesla performance at the Pikes Peak International Hill Climb race and what it looks like peeking over racecar drivers Randy Pobst’s shoulder as he races to victory this year in a souped-up Tesla Plaid.