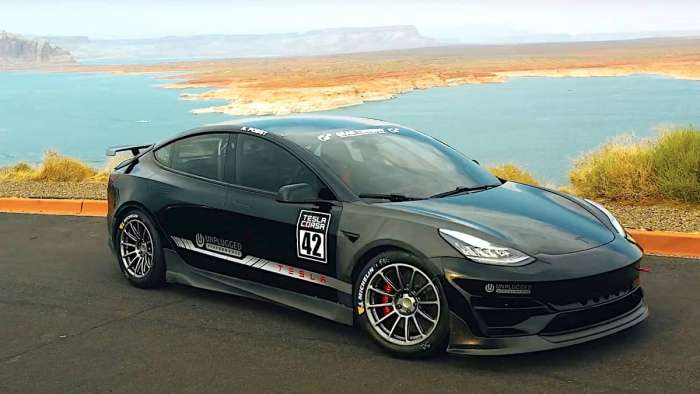 Unplugged Performance recently released a documentary featuring their Tesla Model 3 Team Car at the 2020 Pikes Peak International Hill Climb---a 10 minute (if you are really fast) run that some describe feeling basically like racing on Mars with its thin air, harsh landscape and terrain that sent their Tesla 3 flying. It’s a “bringing a phoenix out of the flames and into the summit” story as described by racecar veteran driver Randy Pobst.
Advertisement

Special thanks to reddit member u.Qwahzi for spreading the word about the availability of the documentary---a behind the scenes look at Tesla Model 3 performance on top of Pikes Peak. 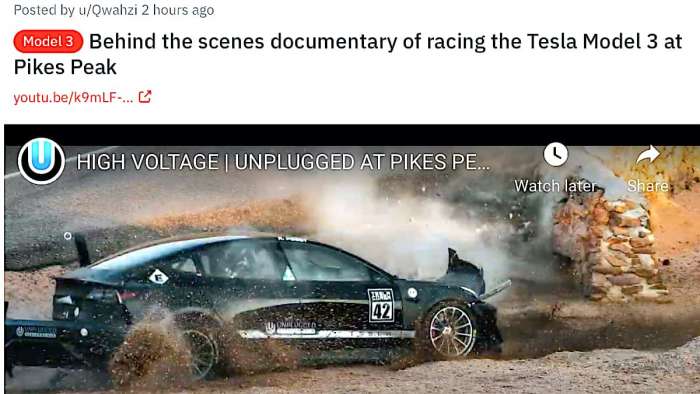 The documentary describes last year’s testing of the mettle of an Unplugged Performance Tesla Model 3 Team Car and its driver against the hazards of the famed Pikes Peak International Hill Climb--- a 12.42 mile, 156 turn, 14,115 foot elevation finish line (starting line at approximately 9,000 feet)---event, that held its first white knuckle race in 1916. This video is a must-see for not just Tesla fans, but everyone who enjoys a story of perseverance.

As the team of Unplugged Performance describes it, “This is our story of perseverance in the face of almost impossible odds and doing whatever it takes to get to the top.” 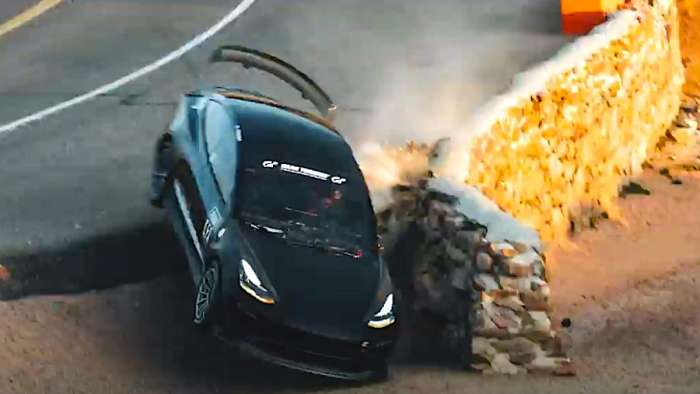 When you’re racing on the limit along the winding mountain roads of Pikes Peak, there’s a fine line between success and failure. With road and weather conditions shifting constantly, even purpose built vehicles struggle to make it to the top. They say it’s almost guaranteed that something will go wrong for each team during race week and your job as a driver, a race team, or a team manager, is to mitigate that risk as much as possible just to get your car to the top of the mountain.

On race day, you’ve only got one shot and everything you’ve been working on for the last year needs to survive 156 turns to get to the top of the 12.42-mile road. Last year, we took on the challenge of Pikes Peak International Hill Climb for the first time. With our favorite racecar driver, Randy Pobst at the helm of a modified Model 3, we were filled with excitement and potential. But then on the second day of qualifying at a turn nicknamed Bottomless Pit, our hopes and dreams of making it to the top, all came crumbling down. Over the next several days our rockstar team of engineers and technicians did the impossible, they rebuilt and raced to the summit.

Before, During, and After the Race

This Year, be sure to mark your calendar for June 27, 2021 “Race in the Clouds” event at Pikes Peak International Hill Climb, where Unplugged Performance is scheduled to return for another run on one of the most interesting races held in the U.S.

Up Next: Here are the highlights of the Tesla Plaid Event in this 10-minute video recap.