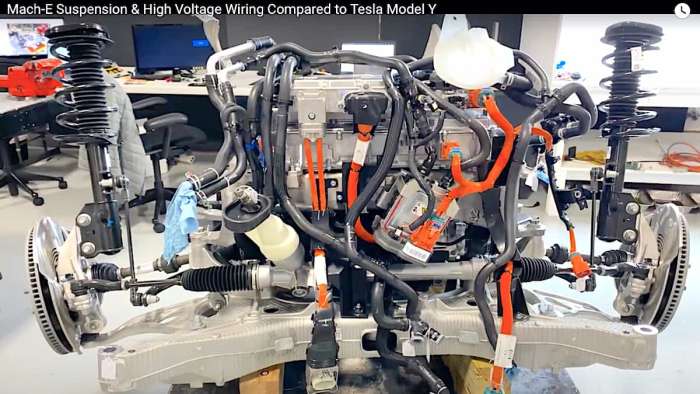 The differences between the Ford Mach-E and its Tesla competitor is not so much about performance; rather, it could be described as being “Tesla-Style” vs “Ford-Style” where the devil is in the details when it comes to engineering. In this must-see video, Sandy Munro brings in Cory Steuben who explains the front and rear suspension systems including the high voltage wiring in this breakdown comparison between Ford and Tesla.
Advertisement

An Engineering Look at the Differences

The majority of comparison articles between Ford’s Mach-E and Tesla’s Y, 3 and Plaid models are typically about performance. How fast, how soon, in what distance, and without veering off the race track or exploding in position. While these are important factors, less is said about the actual engineering differences.

Fortunately, Sandy Munro who has featured in several of Torque News’ articles, gives us a peek with his videos at what is going on and why as he and his staff tears down a variety of vehicles and helps us understand where the really important differences in design and manufacture gives us the vehicles we enjoy and are such crazed fans of today.

In today’s installment featuring a video from Sandy Munro, we will learn the following key points in his most recent episode comparing the Ford Mustang Mach-E with a Tesla Model Y.

Key Points from the Video

1. While the Mach-E gets a 9 out of 10 for its front suspension system using a MacPherson strut and has a tighter turn radius than the Model Y and 3, it is not quite as well-designed as the system Tesla uses, which translates to expected less road stability in the Mach-E’s handling performance.

2. The high voltage wiring running from the inverter to the electric motor in both vehicles while appearing similar in actuality are worlds apart in exactness of fit and usage of materials with Tesla clearly outshining Ford. This translates not just to aesthetics---since both are functional---but is an example of how Tesla’s focuses on design to save on both weight and material costs. The Mach-E high voltage bus is actually a few inches longer than that used by Tesla which means more cost---a significant point since the high voltage wiring is the most expensive wiring component in both EVs. Sandy Munro points out that this could be a due to Ford outsourcing many of its parts whereas Tesla creates in-house.

3. In spite of Ford turning to induction electric motors, the placement of such is little different than the placement used in their legacy internal combustion engines; whereas, Tesla has a totally different approach to where the motors both front and back should lie toward applying power to the wheels. Why the lack of change in motor placement with the change in motor type? Sandy Monroe speculates that it could be due to the notion of keeping the engine easier to remove for repairs or other service on Ford’s part with their vehicles.

4. Ford has different connector designs in their engine, whereas Tesla uses a common connector design. Sandy explains that this is what happens in a company like Ford where you have multiple engineers not communicating with each other as they design their respective component of responsibility in an engine the way they know or see fit. And/or, this is an example of what happens when an automaker relies on off-the-shelf OEM parts to piece together an engine.

For more details and some visual of the points, here is Sandy’s YouTube video in its entirety:

One nagging thought in my head is that perhaps one reason why Ford designs the way it does is not so much because it is new to EVs, or that it has relied on off-the-shelf OEM parts since forever, or that it’s really founded on their legendary manufacturing process; but rather, that it is in anticipation of preparing itself for servicing it’s line of EVs after they are sold?!

This is not meant to be sarcastic or disrespectful, but from what we’ve seen so far with their potentially removable and replaceable battery pack module system and now the electric motor placement similarity to their previous gas engines, it begs the question is if this is really about anticipated repair issues with respect to costs, profit, and vehicle lifespan.

Feel free to let us know what you think is going on and if we can expect Ford (and other auto manufacturers) to turn from “Ford-style” to “Tesla-style” engineering.