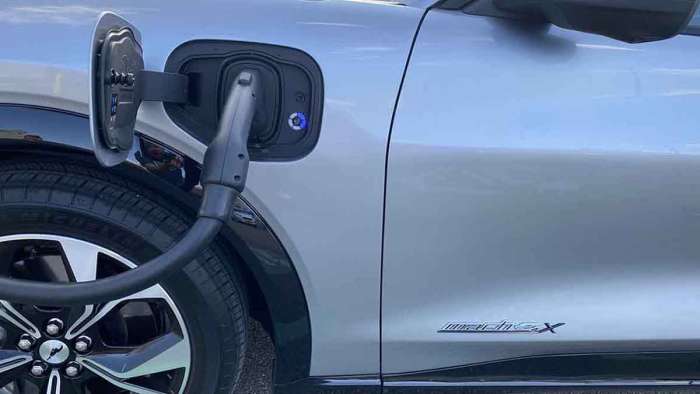 Survey: These Are The Areas Ford Lags Behind Tesla in EVs

CarGurus, a consumer-driven website conducted a Electric Vehicle Sentiment survey in February of 1,097 automobile owners in the United States to determine their interest and perception of electric vehicles today. The survey was not specific to any brand and was generally done scientifically and without any brand slant or bias. Respondents were balanced in terms of key demographics (gender, region, income) in alignment with the U.S. census, according to Car Gurus.

Several things jumped out to me when I looked over the 28-page survey results. One, despite the vocal objections of many, a majority of people are actually receptive to the idea of one day owning an EV. That number is 56% in fact, if the survey respondents answered truthfully to the question about how enthusiastic they were about EVs.

From a Ford-specific standpoint a couple trends stuck out pretty clearly to me. One, Ford has a long way to go to build up their reputation as an EV manufacturer. The most telling stat was that respondents were asked which brand of electric vehicle they would consider buying. 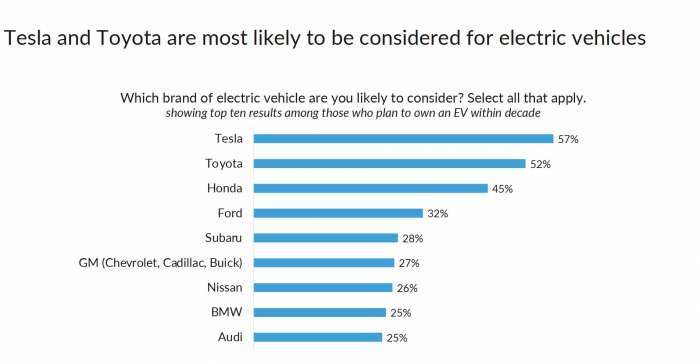 Not shocking, but Tesla was first with 57% naming them. But what seemed troubling to me was that Toyota was second with 52% and Honda was third with 45%. Ford was fourth with only 32%.

While trailing Tesla, who is the leader in this segment by a long stretch, is not surprising, falling behind Toyota and Honda is because neither auto manufacturer currently produces any EVs in America. Meanwhile, Ford has actively marketed the Mustang Mach-E and is touting the upcoming EV F-150 too.

Ford Mustang Mach-E vs. Chevy Bolt
In the same survey mentioned above, General Motors came in a distant sixth, even falling behind Subaru. GM has arguably been one of the most aggressive US car manufacturers when it comes to their electrification plans. Yet, if the survey is to be trusted, they, like Ford, have some work to do when it comes to swaying the consumer’s impression.

The Chevy Bolt has been available since 2016, thus giving GM an edge in the years on the market, So it was not very surprising that, according to survey respondents, that the Bolt EV/EUV had a slight edge over the Mustang Mach-E, which has only been out for a couple of months.

The survey revealed that 30% would consider buying a Bolt, while 28% said they’d consider the Mach-E. That’s a pretty narrow gap considering that GM was out with their all-electric Bolt years before Ford with the Mustang Mach-E.

Ford EV F-150 Could Be Game changer
As much focus and attention as there’s been on the Mustang Mach-E, and for sure it’s an incredibly important vehicle for Ford Motor Company, looking a bit into the future reveals a vehicle that might be even more important to Ford’s long-term electrification plans.

For 2022, likely 2023, Ford will release an EV version of the most-popular vehicle in the country, the Ford F-150. Having an electric truck that has range and capability could be a game changer for the Blue Oval.

Tesla already made waves with the announcement of their Cybertruck. As goofy-looking as the Cybertruck is, it already has an exceptional pre-order following and will surely interrupt the truck segment. This is the same segment Ford dominates as the F-150 is their cash cow.

According to the CarGurus survey, the truck segment is up for grabs with 40 percent interested in a Cybertruck vs. 32 percent for an EV F-150 and 17 percent for a Hummer EV. This survey is among those who plan to an EV within the next decade.

This is the area Ford really needs to focus on and promote if they’re to hold onto the oh-so-important truck segment. Tesla will be a disrupter in the segment if Ford doesn’t make the EV F-150 a primary focus.

Also, it will take a lot of marketing for an EV F-150 to be embraced amongst the V8/diesel crowd that seem to be the most boisterous. First and foremost will be ensuring that the EV F-150 has a lot of range and can do a lot of towing. And just how that range will be affected by towing and payload is the biggest uncertainty, not just for Ford, but for Tesla too. 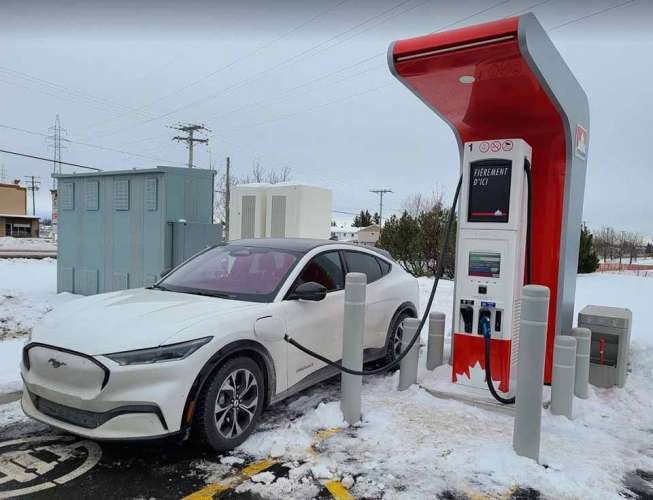 Unresolved implications for electric vehicle ownership in the future
The CarGurus survey was eye opening to me. The three main conclusions that Car Gurus drew were:

• Electric vehicles pose a big opportunity for the auto industry: over half of consumers plan to own an electric vehicle in the next decade.
• Building charging stations is the most effective solution for speeding up EV adoption. 65% of consumers say they’d be much more likely to consider an EV if there were more charging stations available in their area. And most EV owners today use them as everyday cars so it’s critical they can rely on the infrastructure in place.
• Tesla is the current EV market leader, in reputation and purchase consideration, but in this emerging space buyers are excited by the possibilities and less brand loyal so there’s good chances for competitors to disrupt.

What was the most surprising thing you saw from this survey? For me it was Ford being behind Toyota and Honda, on reputation alone, in electrification when neither manufacturer is yet to be engaged in the EV segment. Leave me your thoughts regarding Ford and the EV future.

Thanks to Car Gurus for the survey information and charts used in this story.