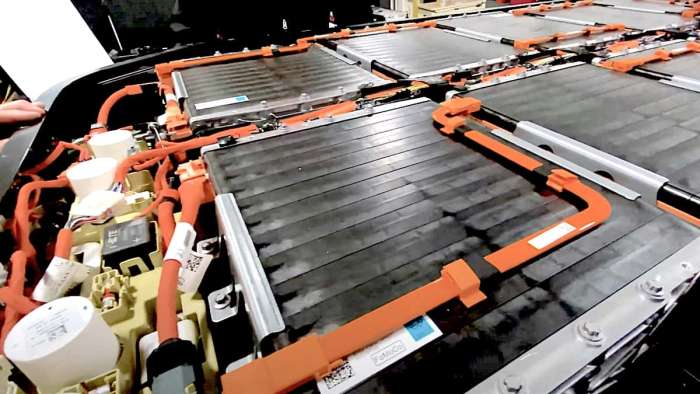 Here’s a great opportunity to take a look at the 2021 Ford Mustang Mach-E battery and learn what concerns battery industry experts have about it, as well as how Ford’s battery system may hold some advantages over the battery pack systems used in Tesla and other EVs.
Advertisement

The battle of the EVs is mostly about how much road range and power can be squeezed from EV battery pack systems while at the same time keeping both weight and cost down…and avoiding fires.

In fact, a recent 11 car EV road trip race between competing EV makers' vehicles demonstrated that there is a difference in performance and charging abilities between different EV makers and the batteries they use. Furthermore, a newcomer to the EV race has recently announced that THEY have the most energy efficient EV in the world by using smaller battery packs aided with a built-in solar charging system.

However, there’s more to road range and power than just the cells that go into a battery pack as we recently learned from an article about Tesla battery pack secrets, where we discovered it is how the power is managed i.e. controlled in the various models of EVs that can make all the difference in performance and reliability.

In this recent YouTube video, we will learn a little something more about battery pack secrets and its power management with the help of EV battery experts Sandy Munro and Mark Ellis who take a peak under the battery pack cover to show us the SK Innovation battery packs used in the popular 2021 Ford Mach-E.

Clustered into multiple modules, the SK Innovation battery packs used by Ford are of particular interest the moment the battery system cover is removed. What the experts point to is the use of an external wiring harness consisting of a remarkable number of wires that connect the modules to the battery controller. The experts are at a loss of why so many wires are used, but state they will save their opinions for later when the packs will be further dissected in a future video.

In addition to the obvious wiring differences observed in the Mach-E’s battery system, a unique coolant plumbing system is also readily visible that is used to help control the heat dissipation from the modules.

While there is some discussion of potential problems concerning this network of coolant plumbing between and surrounding the modules with multiple hose connections that increases the chances of coolant leaking within the battery compartment, the experts also take note that the design of the battery packs offers something Tesla likely lacks right now---ease in reusability of the battery modules. (Which, by the way could soon change as recent news reports that Tesla workers have just signed the first structural pack with 4680 cells that will bear further investigation as we learn more from Tesla on their latest design.)

According to Sandy Munro, once the modules no longer hold enough power to sufficiently propel a vehicle, rather than scrapping the weakened battery packs for its metals, Ford may have designed their units for easy access and reuse for lower power needs such as providing power in homes.

For more details about what they found and their speculations into the design of the Mustang Mach-E battery system, here is the YouTube video they produced:

For more about the 2021 Mustang Mach-E and how it performs under its newly designed battery system, here is an informative review of the Mustang Mach-E by Ford expert and journalist Jimmy Dinsmore.

Coming Up Next: Here's an engineering comparison between the Mustang Mach-E and Tesla Model Y.

Bruce Holden wrote on January 11, 2022 - 7:45pm Permalink
I would be interested in knowing more about the fire prevention systems in the Ford battery pack. I am aware of the coolest system used by Audi and probably Porsche and VW, wondered how the Ford system would rate against other systems as I am aware of the fires in Tesla and Chevy systems.