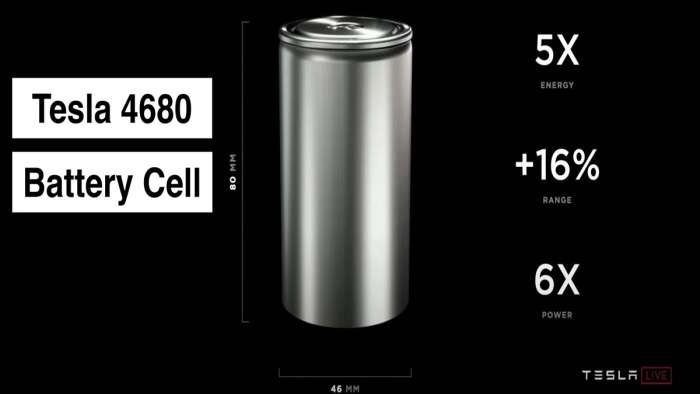 Tesla's 4680 Battery Cells are supposedly spotted and this is a clue that they could be ready as a battery was spotted being signed by employees of Tesla. This could be the first 4680 structural battery pack and, if it is, is a really big deal for Tesla - about as important as the recent full self-driving v9 beta.
Advertisement

Let's go to Tesla Facts Twitter feed and see what they have to say now.

Sources have confirmed that this is indeed a Tesla 4680 cell based structural battery pack, built a few days ago. https://t.co/UuWYAmaXlD pic.twitter.com/8RKktUlW0J

This is another source claiming that this is indeed a Tesla 4680 battery cell. That's two sources. Wouldn't it be nice if Tesla had a public relations department or posted on their blog about this? I suppose Tesla would rather have mystery built to create intrigue about their 4680 structural battery pack.

There are continued comments of confirmation that this is a 4680 battery cell:

Related News: The 4680 battery cells compared to other batteries from Tesla

There has been another newer update from Sawyer Merritt saying that these are not 4680 cells.

I have confirmed with my own source that the photo floating around yesterday with all the signatures was a photo of the new Plaid S/X pack with 18650's. It was a celebratory event as it was one of the first Plaid packs off the line which is why everyone signed it.

We will update as we get further details on whether these are 4680 cells or not.

Tesla wants to grow at at least 50% a year and to do that, it will need more batteries. When Tesla did its forecasts, it saw that it wouldn't have enough batteries if it just relied on suppliers. So Tesla decided to design a new solution to improve manufacturing capability and battery quality

Manufacturing continues to improve, ever since Tesla's first Giga factory in Nevada. The batteries have a tabless architecture which eliminates a manufacturing step of production lines needing to wait and add a tab. This will increase speed and reduce defects, speeding up time and increasing scale.

The new 4680 battery cells are 46 mm in diameter and 80 mm in height. This increased storage capability delivers a 16% increase in range. Also, the elimination of tabs makes it easier for electrons to get around inside the cell because you have a shorter path.

There is a challenge when using silicon in a battery in that it expands around 4 times when charged with lithium. Silicon is a very abundant element in the earth's crust though, making it a low cost and easy to acquire commodity. Think of sand - it's just silicon dioxide. Tesla starts with raw silicon which is a lower cost and made its own chemistry to deal with it. There are a number of chemistry improvements regarding Silicon.

Tesla also improved the cathode process, which is a long and inefficient process that has gone on for a while. So Tesla decided to create a blank slate and start from scratch. They created a process that is far less cheaper and creates less waste.

There are a number of other improvements, including improved thermal characteristics, all of which can be seen in the below battery day video:

What do you think - is this the 4680 structural battery pack for Tesla? If not, what is it?

DeanMcManis wrote on July 11, 2021 - 3:00am Permalink
I think that it's probably true. the Kato rd. Fremont pilot 4680 battery factory has supposedly been in full operation for many months now, but having a completely structural 4680 pack is an important step in Tesla's rollout of their new batteries. The first production use of the 4680 batteries and structural pack has been planned for Giga-Berlin's new Model Ys, but the German factory has been mired in bureaucracy and delays in it's construction and completion.