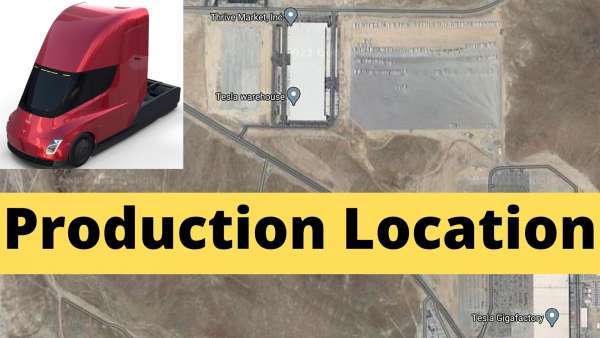 Tesla To Build 5 Semi Trucks a Week Near Giga Nevada

Tesla Semi production line at new Nevada building is coming up with a goal of 5 electric trucks per week, Electrek reports, based on its "reliable source."

"Reliable sources familiar with the matter told Electrek that Tesla is currently building a low-volume Tesla Semi production line in the building. Once completed, they expect a production capacity of five Tesla Semi electric trucks per week. The plan is still for volume production to happen at Gigafactory Austin once Tesla can also ramp up battery cell production there," writes Fred Lambert at Electrek.

Tesla news source Sawyer Merritt writes on Twitter that he is not the Electrek's source, but the reliability of this source is legit.

For those questioning the reliability of this, it's legit.

Also, Electrek confirms that the building, which sits at 550 Milan Drive (pictured above) next to another building used as a warehouse by Tesla, is housing a new production line for Tesla Semi currently being deployed by the automaker.

Please note that Tesla building five Semi trucks per week, this sounds like a pilot line. In other words it's just a temporary line until Giga Texas can build the Semi trucks.

Note that in December 2020, a Twitter user BRCooper tweeted, saying "Tesla will start low volume production of the semi for internal use and early reservation holders at the building they own near Giga Nevada. Full semi production will start at Giga Austin in mid 2022 after Model Y (mid 2021) and Cybertruck (late 2021)." Now, after that tweet, today's news is more reliable, it's more than a rumor.

It sounds far more substantial than a rumor, since there are others that use a similar language from different source.

As you can see from the image, the building is not very big, but keep in mind we are talking about only a test line. I like Tesla's Semi strategy. This is a good way to get started and get more data, experience and feedback from the fleet of Semi's and adjust as you go.

Also, I think five semi trucks a week is a lot more than your average semi manufacturer is doing in terms of EV semis.

Also see: After Tesla’s Win, Case Against Rivian To Go To Trial.

Elon Makes a Cybertruck Statement With an Action, But Quiet in Words
Tesla's Record Month in China: Doubled Registrations in March 2021
END_OF_DOCUMENT_TOKEN_TO_BE_REPLACED