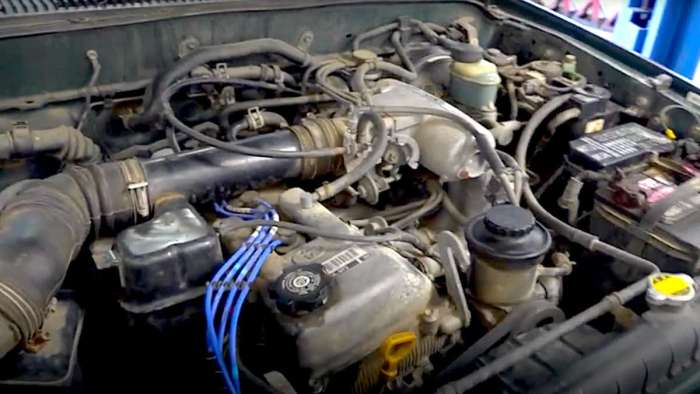 Can you spot the mistake in the engine image above that is a sign of a common car maintenance mistake owners often make when working on their car engine problems? Read on to discover if you are correct, and find out what was the unusual mystery source of the real problem behind this engine that some owners face with their Toyota and other makes of cars.
Advertisement

We’ve all been there at some point in our vehicle-owning lives---our car or truck is not running quite as good as it used to, so we decide to diagnosis the problem of poor engine performance by buying a Haynes or similar auto repair manual at the local chain auto parts store and take a stab at diagnosing what our engine problem could be.

Most manuals will have a rather abbreviated trouble-shooting section, but that does not deter us as we have a basic understanding of how an engine operates with fuel, spark, compression, and timing. Or worse yet, perhaps there is a neighbor or friend or curious passerby seeing your hood open, and begins to diagnose your problem for you with some obscure malady they’ve experienced.

One of my favorites is when someone highly recommends shooting some can of whatever commercial automotive concoction they swear by, into either the carb or the fuel tank saying that it works for them and will take care of the problem.

Anyway, armed with the manual and trouble-shooting list we begin to check the components we believe are causing the problem and one-by-one begin replacing them with new components thinking this will take care of the engine problem.

However, after three trips to the auto parts store and maybe a couple of hundred dollars poorer, the engine is running no better and we begin to doubt the value of the repair manual…but never, our own automotive skills.

This is a too-common, but understandable scenario, and the topic of the video below---novices going down the wrong path of an engine diagnosis because they failed to check the most basic maintenance components of an engine before diagnosing what the problem really is.

In the case of the Toyota engine shown in the image above, the hint that a mistake was made was a very dusty engine with bright new sparkplug cables (and presumably new spark plugs) that the owner of the vehicle replaced in hopes of fixing his engine problem, and yet, nothing else appears to have been touched.

In reality this is ok, because it is part of the learning process. And after shelling out some money with needless parts replacement, you will begin to see the value of learning how to diagnosis an engine properly.

In all likelihood, the engine was running a little rough and the owner started down the path of spark and possibly even timing, when the source of the problem was much simpler---not enough air getting to the engine because of a blocked air filter! Which should be among the first things checked before doing anything else to an engine.

Here is a YouTube channel video of such a real-life scenario happening with a surprise finding that highlights why the air filter on your car is so important to check and maintain regularly.

For more about car maintenance, care and repair take a look at some of these helpful articles on changing your spark plugs and coming to terms on what oil you should use in your car.

COMING UP NEXT: Demo on how to change your transmission fluid at home.