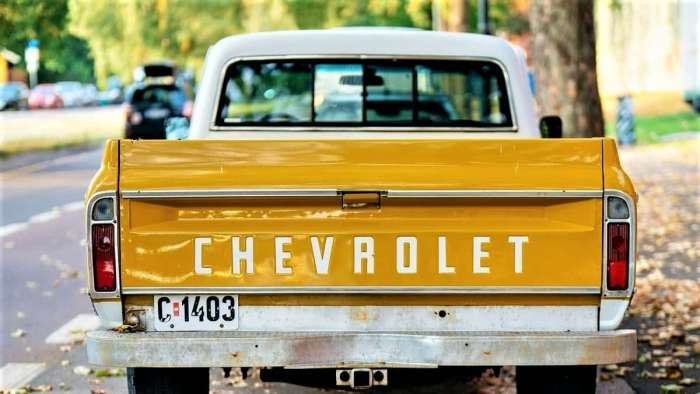 Thinking about buying a used Chevy truck, but not sure which model in what eras are the keepers worth investing in? Here’s the latest from an experienced Chevrolet truck owner and mechanic who offers this guide about Chevy truck specifics and which you should and should not buy…and why.
Advertisement

Used Trucks and the End of an Era

The days of finding an old used truck in decent shape for a few hundred dollars are gone. I discovered this just a few years ago upon returning to the U.S. and was in the market for a used truck to restore as a new project that would become my primary ride. Yes, those trucks were still out there; however, we are talking $10 K and above for makes and models that appealed to me possessing a carburetor to fuel the engine, points to control the timing, and a body that looked like what a truck should still look like---don’t get me started on those SUV-looking newer models of trucks.

Related article: Why You Should Look at a Used Silverado Before Considering Buying a New Model

You would think that it was not really that bad a few years ago. But I had another two requirements---no abandoned truck projects someone had already tore into and gave up on, or trucks with a rusted-out bodies. There’s nothing like finding a first-glance truck that looks promising on the outside only to discover hidden rust damage so bad that the cab is resting on the steering column. And nothing screams “RED FLAG” like a used vehicle with its engine in pieces in the truck or back of a truck.

Thumb through a Hemmings Motor News classic car guide and you will find no end of unfinished older model cars and trucks for sale in all sorts of states of disrepair that a knowing wrench recognizes will likely lead to despair and bankruptcy.

Inside I feel the fault of all of this is due to popular automotive shows that made restoration and repair look easy, fast, and cool. My impression is that these shows attracted a lot of misguided enthusiasts that resulted in driving used truck prices up and creating the piles of parts tossed in the back of so many trucks for sale. But---like I said---it’s my guess and I will leave it to a sociologist to eventually write about what happened the past decade to old used trucks.

There are a large number of pitfalls when it comes to rebuilding an older model truck. Chief among them is finding original parts. Not impossible, but it can be very challenging. Fortunately, there are some businesses selling restoration parts and you will learn how to change your original plan and find a compromise. You might discover there is some wisdom in buying two of the same model and using the poorer condition one as a parts source.

The pluses after all of the aggravation and dollars spent is when you discover that it was not the end product of the completed project, but the journey that made it all worthwhile.

That said, rather than belabor what restoring an older model truck---or just finding a used one that would make a good “beater” truck with a few repairs---is like, here is an interesting YouTube channel video from the Car Wizard who discusses what he knows about Chevy trucks from the 1970’s to 2008 as he guides viewers on what models to buy and which ones to avoid that includes tips to help you find the era of truck that appeals to you and your wallet.

In the Video You Will Learn

What's The Beef with Chevy Trucks? Car Wizard Shares Their Differences and Which to Buy & Not to Buy!

What are your thoughts on old trucks? Let us know in the comments section below about your experiences and a favorite one you have owned.

PS: If you have an older Chevy you love and want to say something about it, feel free to send a photo and caption. I would like to post one article of the Chevy's owners love someday if I can get enough responses. Thanks for sharing!

For additional articles about used vehicles, here are two for your consideration: “Consumer Reports Lists What's New in Small Pickup Trucks” and “Everything You Need to Know About Buying Car and Truck Tires.”

COMING UP NEXT: Consumer Reports New Listing of This Year’s Trucks Buyers Liked and Disliked After Buying