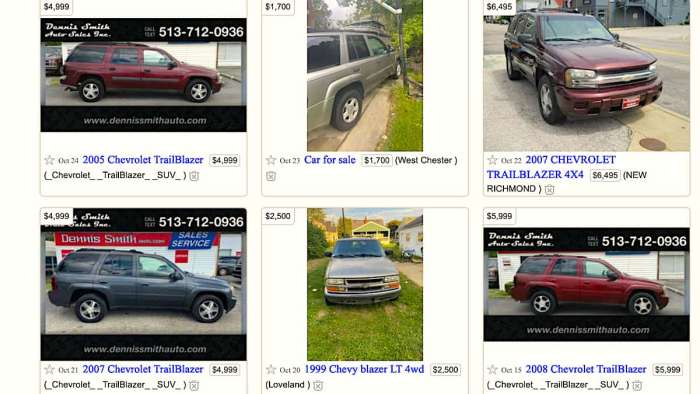 A mechanic with 20+ years of experience offers this warning about why you should---in his words---“… Never, Ever Buy…” these 6 used SUV models that he warns are the worst overall; and, are often found listed online at Facebook Marketplace and Craigslist---just for that reason.
Advertisement

There’s no question that finding a good used car or SUV is not easy during the current new and used car market due to COVID and the chip shortage. Earlier, we offered some advice from Consumer Reports; advice from honest car mechanics who have worked in car dealerships at some point in their lives; and, mechanics-turned-YouTube hosts who have their own garages and talk frankly about buying used car cars and the type of scams that are going on today.

Today, we are discussing one recent warning about buying used SUVs that bears some necessary mention---SUVs that are proven lemons according to a mechanic who has worked on enough makes and models over the past 2 decades to know the good, from the bad, from the downright ugly SUV makes and models that are notorious lemons soon after leaving the new-car lot.

And, unfortunately, unless you are in the know, those models too often show up on Facebook Marketplace and Craigslist as attractive good deals in comparison to prices seen advertised at dealerships. And while we’ve learned that some car experts say that you can find a good deal from an individual letting go of their old spare vehicle after buying a new car, you have to be smart about what is being sold and do your research ahead of time.

That said, here’s your chance to find out about six SUV models from which manufacture years you should definitely avoid, according to the popular Car Wizard YouTube channel in this recently released video following this summary:

#1: 2012-2022 Buick Encore models with the 1.4 L Ecotec Turbo known to require multiple OEM turbo replacements every few years at $2K to $3K per replacement. The models are known to have electrical issues with the batteries and charging systems. Host states this is one SUV he hears owners commenting a lot on regarding wanting to dump their vehicle.

#2: 2006-2017 Jeep Patriot and Compass models are notoriously unreliable and do not age well with use. Expect multiple CVT transmission replacements by the time it reaches 100,000 miles. Considered to be a bottom-level model of the popular Jeep make, this one has an engine that is described as “…loud, unrefined, and underpowered.” The host believes its engine and transmission problems are a result of low-quality OEM parts in its design and manufacture; The interior likewise consists of the cheapest materials that do not wear well with use.

#3. Any Ford Expedition and Excursion models with the 5.4 L 3-valve V8 engine. “This engine is the second worst engine next to the Northstar (Cadillac make) V8…it’s really…that…bad,” says the host. Apparently, unless you find a used model with the upgraded engine that came afterward, the ones you will find listed for sale on Facebook Marketplace or Craigslist are the ones that the only fix (for $7K)…is a total engine replacement.

#4. 2006-2010 Jeep Commander models do not share the engine problems of the previously listed makes and models; but rather, fail everywhere else in their design. The host admits to owning one once that had the later-acknowledged notorious problem of leaking from the sun roof. In addition, there is the quadra-trac issues that leads to transfer case destruction when the wheels even differ slightly in circumference from a slight mismatched tire replacement. Exhaust leak problems and differential mounts causing clunky driving exist too.

#5. 2001-2008 Chevy Trailblazer models have not so much engine problems as they do interior problems with the cheapest buttons, knobs, fabrics, etc., that go into the interior leading to a vehicle that is physically falling apart---rotting---in front of your eyes. The HVAC actuators are fragile and commonly break, and although relatively cheap to replace---it costs $1,000 to get the dash off to replace the broken part! “These are the Chevy Cavaliers of the SUV world…do not buy the Trailblazers guys---they are really bad,” says the host.

#6. Any Chevy Traverse, GMC Arcadia, and Buick Enclave models of any year should be avoided completely, according to the host due to they are notorious for having multiple electrical issues throughout the vehicle. The reason for the electrical problems are due to the cheapest parts possible used in their electrical system. In addition, these models have the 3rd worst engine of all—the Chevy 3.6 engine with its well-known multiple timing chain breaking history at $4K per replacement. There are also transmission issues and steering rack problems as well.

Final Advice from the Car Wizard---"Buy Toyota” for your used car purchases.

6 used SUV's to Never, Ever Buy according to the 20+ years of CAR WIZARD mechanic experience

For additional articles about good values in cars today, be sure to take a look at “The Best and Worst Used Toyotas To Buy Recently Reviewed” and the “Used Car Seller Tricks to Resurrect a Flood Damaged Car.”

COMING UP NEXT: Consumer Reports Test Results Show That These Winter/Snow Tires Have The Best Grip

LG's New EV Battery Plant Is a Welcome News for Tesla
Tesla Giga Berlin's New Hurdle: It's Not Only the Gov't, but Now Tesla Itself
END_OF_DOCUMENT_TOKEN_TO_BE_REPLACED