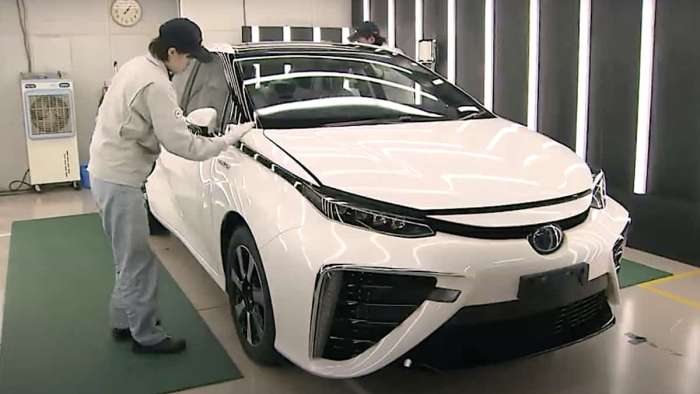 The odds are pretty good that any Toyota you pick on the road at random was actually made in America. But are there any differences in how a particular make and model you own turns out if it was made in Japan versus the U.S.? Here’s what some automotive experts have to say about the question of who cranks out the better Toyota; plus, how you can tell which country your Toyota was manufactured in.
Advertisement

In spite of being a Japanese brand of vehicle, Toyota has been manufacturing vehicles on American soil for over three decades. And with that, there naturally comes the question of whether there is a difference between buying a car made in Japan and one that is made in America when it comes to the same make.

Of the Toyota models made in American the list includes:

If you spot a Prius, a Mirai, a Land Cruiser or a 4Runner, then the odds are good that it was made in Japan.

However, some Toyota models are also made in other countries such as Canada, Mexico, Australia, New Zealand, South America, Germany, England, Italy, China, and Korea.

In a recently released “The Car Care Nut” YouTube channel video, the host addresses the question with assistance from Mr. David Chao a mechanical and automotive engineer who has worked for Toyota for many years and served as an automotive industry advisor and educator of automotive development.

In their discussion you will learn how that the answer to the question is multifactorial based primarily on the interrelated relationships between:

Furthermore you will learn:

1. It is a myth to never choose the first of any model if you want to avoid new-model problems.
2. Why engineering changes occur multiple times within the same model during its first 2 years.
3. That software is more of a problem than the hardware.
4. Which months of production are the best window for buying a trouble-free vehicle.
5. Not all made-in-Japan Toyotas are built with Japanese parts while some made-in-America Toyota’s have Japanese parts.
6. Whether standards really differ between the two countries.
7. Are there design differences within the same models from different countries?
8. How does the same model compare between different countries?
9. Is there a difference in the diligence of the workers between countries?
10. Is it worth waiting for a Made-In-Japan model when buying a Toyota?

That said, here is another important video from The Car Care Nut YouTube channel that was released recently that may affect how you will look at Toyota models and where they are made.

Without further ado, here is the video in its entirety for your elucidation and benefit as a new and used car shopper:

How to Tell Which Country Your Toyota Was Manufactured In

This is an easy question to answer. Simply look at your vehicle’s VIN:

For more used car articles related to the topic, be sure to check out the following linked articles “The Sealed Automatic Transmission Flush Deception Revealed by a Mechanic; and, “How to Inspect The Transmission Fluid on a Used Prius.”

Bryan Wilkins wrote on November 4, 2021 - 11:36am Permalink
Having had a 2017 Prius totaled in a rear-ending in Wisconsin.(Farmer forgot he had a brake peddle or needed liability insurance.). Having loved that car and local prii used cars being overpriced . Mine having 195,000 miles on it devalued it alot with even with elevated local valuations. I asked 3 local Toyota dealers can just I order one off the boat. I was told not possible. One Toyota Dealer 160 miles away took a $500 deposit. Sticker+shipping+$50 paperwork + 5% sales tax. I don't need the car till summer for a trip to Canada. Question is will I see my 2022 Prius LE ordered October 21,2021 by July, 2022??? No one can tell me and I can always back out of the deal. $1 American will get me $1.25 Canadian. Even that has narrowed.
Timothy Boyer wrote on November 4, 2021 - 1:41pm Permalink
Sorry to hear about your loss. Yes, there are a lot of uncertain issues with back-ordered cars. Best bet is to stick with your Prius order and have a backup car plan just in case. I would recommend hunting for a used model that you could easily resell after your Prius arrives. Check our site for used car recommendations, make a list and then maintain an active search. The good point of this is that you can take your time, consider carefully, and walk away if the car after inspecting does not pan out as a good temp car. Good luck!
Lauren wrote on July 15, 2022 - 11:12am Permalink
I just traded my 2021 Corolla SE, which was made in Japan, for a 2022 Corolla SE Apex, that was made in Mississippi. There is no comparison. Despite the Apex being a more expensive model, the quality is no where near that of the 2021 Corolla that was made in Japan. The car was delivered out of alignment, the body panels don't fit together correctly, the radio sound is poor quality, the interior seat seams aren't stitched correctly, the tire sensor dash light doesn't work, and the worst of all, water collects in the doors when it rains. After researching, Toyota is aware of this issue and their official "fix" is to leave out the plugs at the bottom of the door so the water can drain out. Absurd. Water should not be collecting in the door panels in the first place. This is apparently an issue only present in the Toyotas made in the US, not Japan, And its is across many models not just the Corolla. Over time, the repeated water exposure is going to cause rust, mold, mildew and damage the electrical system. Save yourself the headache, if the Toyota wasn't made in Japan, DO NOT buy it.
Alexandre Vieira wrote on September 5, 2022 - 12:31pm Permalink
We been Toyota/Lexus for over 2 decades and we had Prius, Corolla,2 RAV4, Land Cruiser 99, Lexus LX, LS, IS, ES and now we driving a RX-F 2017 made in Canada already had 3 recalls. The difference quality between made Japan and USA is very clear unfortunately. All my previous made Japan cars was never a recall.