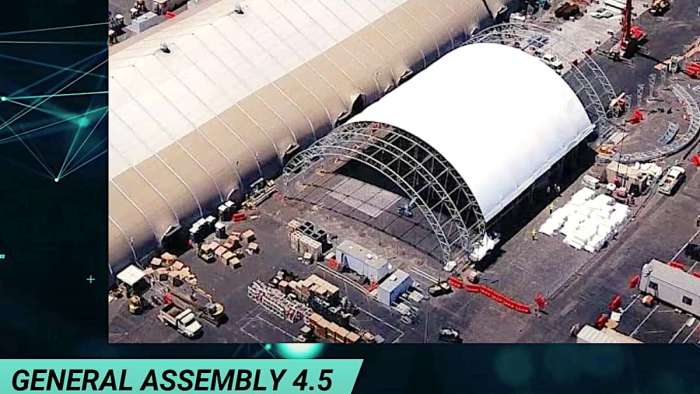 Building Tesla’s in a Tent---Who’s laughing Now?! The Latest Video Info on GA 4.5

Find out now some of the latest information in a recently released new video that discusses Tesla’s General Assembly 4.5 (GA 4.5) Plant in Fremont.
Advertisement

Earlier we had reported that Tesla had undergone some major upgrades at their Fremont factory and was in the process of opening a new assembly line---within a tent of all places!

Building cars in a tent sounds like a crazy idea. However, it might be not such a bad idea after all according to a recent video about Tesla’s GA 4.5 plant that was constructed just outside its Fremont plant’s main facility and how it is cranking away at building Tesla’s more popular models with plans to grow bigger and better. And while we recently learned about Tesla's Mind Blowing FSD V10 release, this latest news adds to the excitement for Tesla enthusiasts.

According to a new video released from Tesla Vision:

Tesla is planning for an insane expansion of its Model Y production lines, according to filings submitted to the City of Fremont. Other than expanding the production lines, the company plans to make GA 4.5 a permanent structure by adding another 64,000 square foot structure onto the Fremont factory. The application also includes plans to implement foundations and install underground utilities under General Assembly 4.5 (GA 4.5).

This means that Tesla is essentially seeking to make GA 4.5 a permanent addition to the Fremont facility, complete with plumbing and electricity, which in turn means---increased production! Furthermore, the video mentions that the permits filed also include references to other filings such as “GA4.5 Battery Marriage Tool Improvement and GA4.5 South Expansion Shell & Utilities.”

On To The Video

To avoid any further spoilers, watch the video and learn how this “building cars in a tent” approach to manufacturing has grown into an important production plant for Tesla.

Many Laughed at Elon Musk When They Saw THIS, BUT NOW...

For additional recently released videos about Tesla, check out this one about a non-Tesla solution for Tesla owners when battery problems happen.

BOB wrote on September 16, 2021 - 1:04pm Permalink
Plan to purchase Model Y with 4680 battery for range of 500 + mile range. Currently own 2021 Model Y long range. Partnerships make sense for battery production as the battery is "everything". Time will tell!!
Timothy Boyer wrote on September 16, 2021 - 9:54pm Permalink
It certainly is an interesting part of automotive history. You are right---time will tell on how all of this will play out.