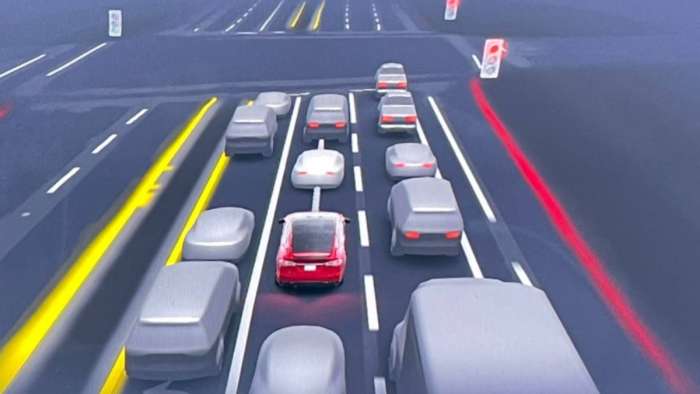 Tesla just released its version 10 of its FSD (full self-driving) software. It's a big improvement over the previous version. Let's see what others are experiencing.
Advertisement

With the release of version 10 of its full self-driving software, Tesla has made a big improvement over version 9.2. Many people have shared their experience on YouTube and for most of those testing the software, they agree with Elon Musk that it is mind blowing. Let's look at some of their experiences:

The first 15 seconds of Rob's drive was a bit hectic as the car exited a parking lot and got close to a blue car. The car got out onto the roads and the first thing I noticed is that the lane markings were very faint, but the vehicle was still navigating the road very well.

The car was able to handle multiple pedestrians and it got to a point where it was at an intersection and it had to merge in the left lane behind another car and you could see the car react on the fly to the situation - very similar to a human would.

Later on in Rob's drive, he passed some construction on the right. However, there were cars parked on the right side of the road. You could see the vehicle pass a Mustang on the left, going through a very narrow road, but doing it confidently.

There was additional construction, which the car reacted to quickly without incident, but it was close to it. Rob was patient and let the car navigate around the construction.

There were multiple changing lanes, pedestrians, construction, and the Tesla was able to do it without Rob having to intervene or disengage. The main things that were close or could have had an intervention were the beginning getting close to the blue car, and making a slow unprotected left hand turn.

Another user, HyperChange, test drove version 10. He was talking about the UI and the changes are apparent. There is a dotted yellow line in the middle of the road now instead of a solid yellow line when the line is dotted. This is an increment to properly representing reality.

The car was driving through tricky roads in Seattle and there was minimal intervention and disengagement. You can see cars on the right, trailers on the right, speed bumps, and the car navigates around all of them confidently and smoothly.

Seattle has some of the trickiest roads. I would say there are tricky roads everywhere and one of the advantages of Tesla having a large fleet of vehicles is that the neural net can be trained on all the tricky roads.

The car continued to drive through Seattle without incident, including handling blinking lights and doing a California roll stop. The car was also making a right turn and another car turned in front of it and the car slowed down for it. There was a disengagement on a left turn, where the car turned a bit too wide.

One of the hard edge cases that HyperChange does is a series of pillars and columns that require the car navigating in a way that isn't apparent unless you know the road. The car used to try and turn into the pillars, but it didn't do it this time.

Instead the car would drive through and go to the left. But HyperChange would still intervene because it still wasn't quite certain what to do. But the car not running into the pillars and going to the left of them is a step up improvement. It did merge through the pillars at the very end, which is amazing. Being able to change lanes through pillars is very difficult, even for a human.

What do you think of Tesla FSD version 10? Is it mind blowing as Elon Musk said? Are we getting close to Level 4+ full self-driving?

I think we will continue to see gradual improvement with FSD until one day, Tesla releases a version - which could be 11, 12, 13, or 14, where people download it and the Tesla just drives without incident or worry over and over again and we'll say, "Wow, it's at Level 4."

With the rate of progress I'm seeing, I would expect to see this next year sometime. I've previously predicted a couple more years, but I think the progress is going to be quicker.

Watch the new revelation Elon Musk just made about Tesla's upcoming FSD 10.1 Beta's human-like behavior and what it can do. Please, consider following us on Twitter for daily Tesla news.