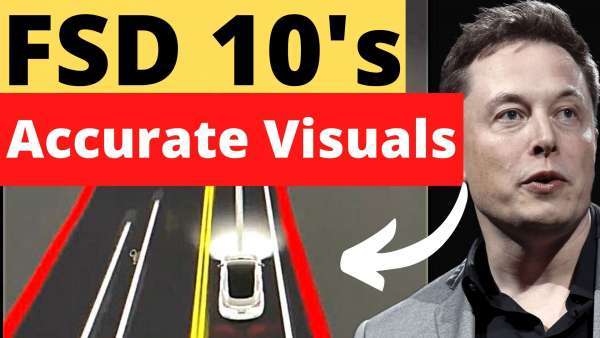 Tesla FSD Is Accurate, but Musk Says 10.1 Will Reverse Back, Like Person

Today, during the entire day Tesla community was discussing the release and the improvements of Tesla FSD Beta 10. But Elon Musk just gave a new update about what we should expect from the 10.1 FSD release.

He twitted, saying the 10.1will creep forward with more confidence and quickly reverse back a little, just as humans normally do, if the vehicle sees danger.

With 10.1, it will creep forward with more confidence & quickly reverse back a little (just as a person would) if it sees danger

Several hours ago Tesla FSD tester Brandonee916 on Twitter shared a video of FSD Beta 10, showing its accuracy and improvements.

A number of FSD Beta testers have noted that the Beta 10 update is indeed quite "mind-blowing" as Elon Musk had put it, in the way that the system is so much smoother and more confident than its already-impressive predecessors.

A Twitter user Brandonee916 writes, "Wow! The visuals are more accurate and pronounced. No more jumping of the world around… check it out. Edges of the roads stay instead of twitching."

As you watch the video, people still can see some jumping around of the lines, but the stop sign and the cars seem stable, which is a good sign of Tesla's improvement.

I am looking in the general media and Tesla discussion group where people among other things ask if this FSD Beta 10 is mind-blowing, then why is it still Level 2 Autonomy? Is this good enough for Robotaxis?

He says The SAE Level refers to the amount of authority the driver is required to have over the car. It doesn't have anything to do with the software capabilities.

Some people says the SAE levels are a pretty bad metric. The unfortunate part is that many people will attack Tesla even if they are 100x safer. It's the trolly problem except with traffic deaths. With FSD there may still be 10-100 deaths a year but the total lives saved by it could be 10s of thousands.

Anyway, Tesla’s next level of achievement should be aiming for Level 3 Autonomy.

But there is also this view. Kevin Damen comments under Electrek’s article and says Telsa’s FSD system will remain Level 2 until the government approves it as a level 5 and the insurance issues are sorted out.

It has nothing to do with the software and will likely be unofficially a level 5 for a few years before Tesla get official approval.

Watch the new revelation Elon Musk just made about Tesla's upcoming FSD 10.1 Beta's human-like behavior and what it can do. Please, consider following us on Twitter for daily Tesla news.

Also, your insurance company will have to approve your car as a Level 5. This likely means that only drivers with Tesla Insurance will be allowed to use it as a level 5 for a few years as well.