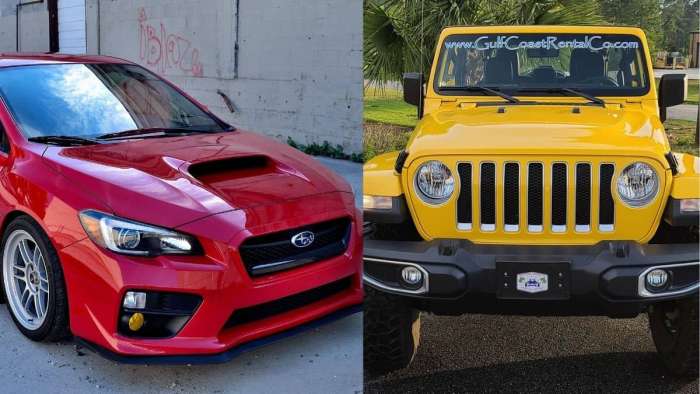 Subaru makes a capable vehicle. So why is there a Reddit trend of Subaru owners swapping out the six-star logo for rides that bear MOPAR badging? What is making drivers switch to cars like the Dodge Challenger, or capable off-roaders like the Jeep Wrangler?
Advertisement

The symmetrical all-wheel-drive system that Subaru has included in many of their models over the years has been lauded as being one of the most capable AWD systems of all time.

Subaru also uses what is called a Boxer engine, which consists of opposed cylinders and pistons that apply equal and opposite pressure on a crankshaft. The symmetry of the paired explosions provides excellent torque, while the low total height and short length make the Boxer engine very well balanced and stable.

Despite the obvious pluses of owning a Subaru, many drivers are choosing to migrate to MOPAR options, like Jeep, or Dodge.

One Redditor, Esdeath_ga_Kill wrote “Been a Subaru guy most of my driving life, but today I turned into a Jeep guy! Doggo already claimed her space, too...” while sharing pictures of his new-to-him 2013 Sahara 4D.

In the same thread, another Redditor, MaryJaneOnTheBrain, described the difference between Jeep and Subaru as coming down to being about the type of driver you are. Similarly, in my previous article: “Mustang Mach-E: One Driver's Opinion and Where Is The Beef?”, I mentioned that my spouse and I are different types of drivers, which led to our choices in mode of transportation.

Whether or not you agree with MaryJaneOnTheBrain’s statement that Subaru’s aren’t particularly off-road capable (I’d remind you that Rally Racing was dominated by Subaru for quite some time), we can all agree that different vehicles are built for different purposes. They are tools with similar, but different uses. Each driver determines the ultimate use of their vehicle, but some drivers see their vehicle solely as a tool and some, like me, see the car as a crucial part of their lifestyle.

I can’t speak for Esdeath_ga_Kill, but for me, the CVT was what really cinched the deal on me trading out my Subaru.

The Continuously Variable Transmission is a marvel of engineering that typically utilizes a pully system that changes the ratio of the gearing by changing the effective size of the different pullies. If you’d like to know more about CVT, I would recommend checking out this video, titled: "Understanding CVT."

The reason that the CVT is what killed my love of my Subaru Legacy is simple: CVT is great for efficiency while performing poorly in the acceleration and interactivity department. In fact, in 2015, Subaru WRX with CVT option blew away critics with surprising sales.

The 2.5 L Boxer engine puts out a respectable 165 PS or 163 bhp or 121 kW @ 5600 rpm (according to www.ultimatespecs.com) but with the weight of the vehicle and the lethargic CVT, she just took forever to get to speed and was not incredibly fun to drive.

Comparing driving my Subaru Legacy to driving my Dodge Challenger is almost impossible. The Challenger blows the Legacy out of the water in every department except for keeping traction, which is exactly the department that I don’t particularly care about in the first place, so that works out for me.

The Subaru Legacy was an efficient tool for navigating central Florida’s busy roads and highways. It was reliable and comfortable enough as far as room for a guy as tall as I am (6’5”). What she wasn’t was fast, fun, or interactive. Using the Sport mode on her CVT and swapping between the simulated gears was an exercise in futility as the length of time it took the CVT to make a meaningful change to the gearing ratio was so much longer than the shift time of a manual transmission.

Stomping on the gas in the Legacy felt like a close friend was gently reminding you to stay in your seat.

Flooring it in the Challenger feels like getting thrown into a La-Z-Boy recliner by a caretaker or older sibling during play-wrestling. Putting the track mode on and laying out a 5.0 second 0-60 mph with the tires doing their Dolphin-squeak imitation as they struggle for traction during the launch just glues a big old smile on my face every single time.

Esdeath_ga_Kill didn’t explain exactly why he made the change, but it’s clear that he’s happier in the MOPAR Trail-Rated Sahara than he was in whatever Subaru he’d been in the past.
I will admit that it is not entirely fair of me to compare the 5.7 L v8 to the 2.5 L H4, but even so, Subaru just doesn’t make a fun to drive car in my size. The WRX STI would probably be a blast, but I’ve found it to be very restrictive in the legs department in my test drives in the past. 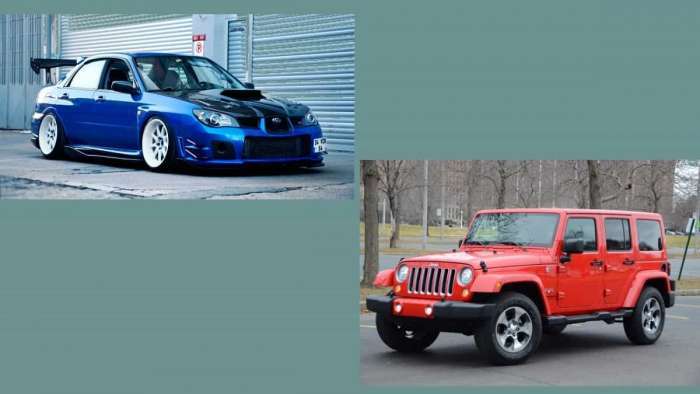 In the end, while Subaru makes a great vehicle, sometimes you just need Good, Old-Fashioned American innovation in your driveway if you’re after a certain driving experience.

Kiz wrote on April 20, 2021 - 11:10am Permalink
And sometimes you just need a man's car
Jason wrote on April 20, 2021 - 3:01pm Permalink
What does that even mean? People should just drive whatever makes them happy and not worry about what others think.
Tyler wrote on April 20, 2021 - 8:35pm Permalink
Trading in a cvt non turbo 4 cylinder Subaru is understandable... Claiming Chrysler "Mopar" and "American made" in the very next breath is laughable. Good luck making it past 150,000 miles in either the Wrangler or the Challenger. Next time your "man's car" is at the dealership for repairs look at how many parts are stamped made in taiwan. If the Turbo Forrester doesn't do it for you, there's a Legacy GT with a manual transmission... BRZ is a blast too. It's not just sti/wrx you're sleeping on, claiming "it's restrictive in the leg department".
Frank DiMuccio wrote on April 21, 2021 - 12:21pm Permalink
I contacted my local Subaru dealership and they said they'd be happy to schedule a test drive for me as soon as they have a BRZ in stock. I'll let you know how it compares to the Challenger soon!
Pizzawings wrote on April 21, 2021 - 2:23am Permalink
I went from a Crosstrek to a Durango SRT. Sure a 6.4 v8 is Hella of a difference than that 2.0. But what made me change was the transmission. The hated the cvt. I used to have a 11 wrx and a 16 brz. Both were fun. But when kids started showing up I thought a auto cvt would be okay. Nope. Turned into a dodge guy with that Amazon 8 speed zf transmission. If you haven't tired it, you are sleeping.
Frank DiMuccio wrote on April 21, 2021 - 12:25pm Permalink
Having driven the Crosstrek as well, I can see the draw of the 6.4 Liter V8. I would more than agree that the more traditional automatic transmissions I'd driven prior to my Legacy felt a lot faster, too. The automatic in my Mazda 6 that was paired with the 3.7 L V6 was much snappier than the CVT. CVT has it's place in efficiency minded driving, but not in performance driving; at least in my opinion.
Jason wrote on April 22, 2021 - 12:18pm Permalink
When my first kid was born, I had an 07 STI. Then I traded it in on a 15 STI before my second kid was born. It's been the perfect all season family/fun car for me. Plus, the kids love it. But I completely understand why people would get rid of their vehicles that have a CVT. Those things are no fun at all to drive.
jg wrote on April 21, 2021 - 12:52pm Permalink
Different strokes for different folks. I went Corvette -> Jeep -> Subaru in my 40 year progression, with multiple models of each and a few Toyota's sprinkled in as well. It had more to do with where I lived, my marital status, and number of kids at the time than anything else. 165mph on the Autobahn was fun, as was 4 wheeling in the mountains and in the snow on the east coast, but I eventually grew up. Currently, my 2018 Outback 3.6 is the best of anything I've ever owned. It has more power than some of the Corvettes I've owned, frequently chirps a tire or two pulling out of parking lots, and corners nice and flat thanks to the addition of a 19mm rear sway bar. It has close to the ground clearance of some of the Jeeps I've owned (I don't really have an interest in climbing up the side of mountains anymore), and has never failed to go through the deepest snow in the west coast mountains I live near now, regularly passing by numerous spun out tractor trailers and particularly Jeep Grand Cherokees buried in snow banks on the side of the highway (no offense to anyone, but I believe most Grand Cherokee owners have not done any "real" off-road driving and don't know the capabilities and limitations of their vehicles). Most of all, the Outback is just the most comfortable to drive of anything I've ever owned (the EyeSight system and other technologies are great bonuses as well). As fast as the Corvette I had when I was stationed in Germany was, the Outback just effortlessly accelerates and wants to go 80mph on the highway without even thinking about it -- all the while getting gas mileage none of my other vehicles could even come close to unless they were coasting downhill.