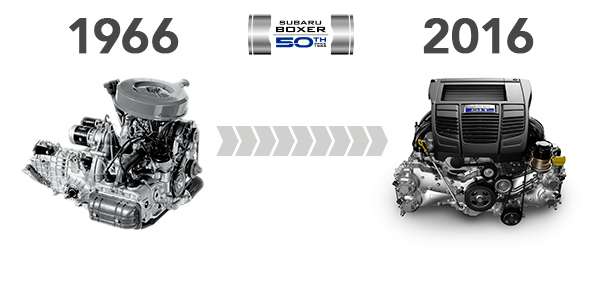 3 Reasons Why Subaru Uses the Boxer Engine; Will It Continue?

Subaru celebrates 50 year of continually using the boxer engine. With plug-in hybrids and all-electrics coming, will it change?
Advertisement

Subaru is the only automaker on the planet that uses the boxer engine in its entire lineup. They use it in the Forester, Outback, Crosstrek, Impreza, WRX/STI, Legacy and BRZ. Porsche is the only other automaker that uses the flat, H-shaped, opposed-piston “boxer” engine. It’s a good design and it’s winning awards. Subaru’s 2.0-liter turbo boxer WRX just picked up its second consecutive Wards 10 Best engines award.

The Boxer powerplant has been used by Subaru since 1966 and has been continually evolving. Subaru says that won’t change in the future. They will continue to use the engine to power their vehicles. There’s three reasons why Subaru is committed to the powerplant.

Acceleration is smoother in the boxer

V type engines which most automakers use, reciprocate the piston in the vertical direction, whereas in the horizontally opposed engine reciprocating pistons reciprocate horizontally. Because they cancel each other's power, there is less vibration and you can feel the smooth acceleration.

It lowers the vehicle’s center of gravity

Horizontally opposed engines have a lower overall height than general series and V type engines, due to the structure of the piston being horizontally arranged in the crankcase. It makes the engine lightweight, compact and it lowers the vehicle’s center of gravity. This makes for a more dynamic driving experience in Subaru’s taller all-wheel-drive vehicles that have a higher ride height like the Forester, Outback and Crosstrek. In Subaru’s performance WRX and WRX STI, the sports cars remain stable at high speeds in the corners.

Reduced damage during a collision

One of Subaru’s core values is safety, and boxer design helps reduce damage in a collision. Horizontally opposed engines are low in overall height, so the structure will be pushed under the floor in the event a frontal collision. Therefore, it’s difficult for the engine to be pushed into the cabin, reducing injury to the passengers. This is evident in Subaru’s high collision safety performance.

With new engine and powertrain technologies on the way, Subaru will continue to use the boxer engine in their Forester, Outback and Crosstrek all-wheel-drive vehicles, even in hybrid powertrain applications. With all-electric vehicles becoming more widely used, this could change that in a big way.