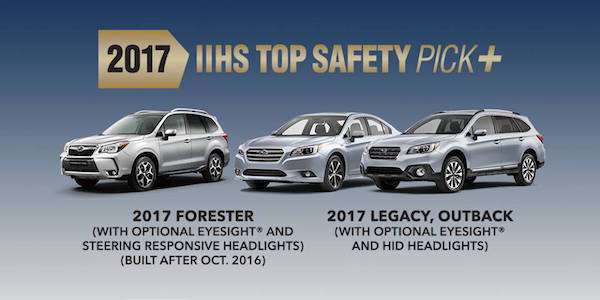 The 2017 Forester, Outback, Legacy, Crosstrek and WRX have once again received top marks for safety.
Advertisement

It’s not new for Subaru to earn top safety awards from the Insurance Institute for Highway Safety (IIHS). The small Japanese automaker has earned Top Safety Picks for their entire lineup from 2010-2016. They pick up 5 more awards this week.

Consumers are concerned about superior crash protection, and these studies prove important when buyers are choosing a new vehicle. According to the J.D. Power 2015 U.S. Tech Choice Study released last year, three of the top five technologies consumers most prefer in their next vehicle are related to collision protection. It’s one of Subaru’s core values, so it’s no surprise they have picked up more safety awards for their 2017 models.

Subaru picks up 5 top safety awards for the 2017 Forester SUV, Outback wagon, Legacy sedan, Crosstrek crossover and WRX performance sports car, when equipped with optional EyeSight driver assist technology. The Forester, Outback and Legacy get the 2017 TOP SAFETY PICK+ awards, and the Subaru Crosstrek and WRX earn 2017 TOP SAFETY PICK honors. Not all of their vehicles have been tested by IIHS. Three vehicles in their lineup have yet to hit the barriers.

What’s the difference between the two safety awards from IIHS?

The new 2017 Subaru Impreza compact with the new Global Platform has not been tested yet in the U.S., but has received high marks in Japan. The BRZ sports coupe and WRX STI performance sedan have not been tested yet, but when they hit the test barriers, look for both to also earn top safety awards. The Subaru vehicles tested by IIHS, the 2017 Forester, Outback, Legacy, Crosstrek and WRX have once again received top marks for safety.