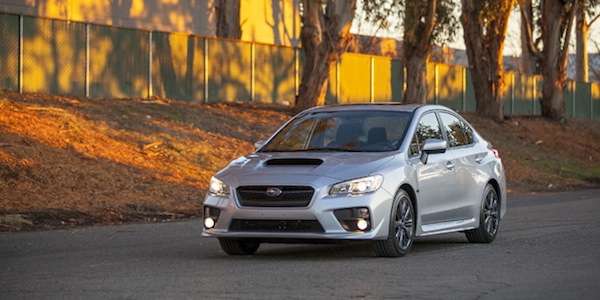 Subaru Australia has announced the new 2015 Subaru WRX has record sales. But a big surprise is the number of WRX sports cars that are being sold with the optional CVT.
Advertisement

The all-new 2015 Subaru WRX is setting records in Australia for sales, but it’s surprising everyone with how many buyers are choosing WRX with the new automatic “Sport” Lineartronic CVT. No one including this writer could see this coming. We didn’t really think Subaru would sell many 2015 new-generation WRX sports cars with the new optional Sport Lineartronic CVT automatic.

2015 WRX comes standard with a new six-speed standard gearbox which is a nice upgrade for 2015 from the outgoing five-speed manual. But Subaru also offers the new Sport Lineartronic CVT automatic as an option. What is most surprising, is that Subaru Australia is saying the new CVT is accounting for more than 50 percent of all the new-generation WRX orders down under.

That’s a huge surprise for performance fans who thought Subaru would sell very few of the new 2015 WRX sports cars with a CVT automatic. But Nick Senior, Managing Director, Subaru Australia said this week, “We’re getting especially strong demand for the sports Lineartronic Continuously Variable Transmission WRX, running higher than anticipated at more than 50 per cent of orders.”

Who would have guessed? But maybe WRX is attracting a new buyer who has never purchased a Subaru WRX before. But that was Subaru’s goal all along. To attract a wider audience with the new WRX and make it more attractive to the average sports enthusiast, and not just the loyal high-performance fans. It looks the strategy is working for the Japanese automaker.

2015 Subaru WRX sales in Australia last month have smashed a 15-year record established back in 1999 when the first generation Rex was introduced. And a big reason is the huge number of WRX with optional CVT automatics that are being ordered. What makes the new CVT attractive to buyers?

This is the same Lineartronic automatic CVT transmission Subaru uses in the 2014 Subaru Forester XT. But Subaru says they’ve tuned the WRX version to provide a “greatly improved” shift response for a sportier ride than the high-torque Lineartronic CVT found in the Forester XT. With the combination of the new DIT 2.0-liter Boxer engine and updated suspension and steering, Subaru may have come up with the right setup for the CVT.

The annoying sound from the CVT may be muffled by additional sound insulation that Subaru says has been added. This new 2015 WRX CVT also differs from the Forester XT by offering several operating modes: Intelligent, Sport and Sport Sharp, as well as step-shifting. It is supposed to emulate traditional shift points to let drivers feel the WRX's power and performance.

During more aggressive driving, the Sport Lineartronic CVT produces stepped shifting, giving the impression of six forward gear ratios using either the ‘I’ or ‘S’ modes. When in Sport Sharp mode, the driver can use the steering wheel paddle shifters for sharper throttle response and eight-speed close-ratio stepped-shifting.

In an interview late last year with CarAdvice, Subaru’s General Manager Product, Masua Takatsu said, “If you’re driving the WRX like a sports car, it will feel like a sports car, and yes, it will give you that dynamic feeling.” He went on to say, “We’ve put a lot of effort into developing our sport CVT, and feel that it delivers the kind of response and feel that you would expect of a car like the WRX.”

With more than 50 percent of the new 2015 Subaru WRX sales coming from the new Sport Lineartronic CVT automatic, it has certainly surprised performance fans including this writer who thought no one would want one. Maybe Subaru knows the sports car market better than we thought they did.

Other 2015 Subaru WRX CVT stories of interest.
Will anyone really buy a 2015 WRX with a CVT automatic?