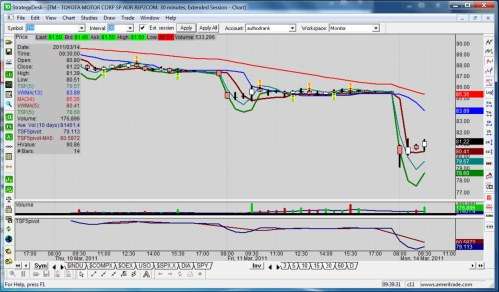 Damage from the 8.9-magnitude earthquake and resulting tsunami in Japan is causing more than production suspensions at plants in Japan. Pre-market hours trading in New York shows a down opening.
Advertisement

Question for investors is, how deep will the quake affect Toyota stock and other automotive stocks? The 30-minute chart shows premarket and 10 minutes into the New York opening.

The rolling of stock prices started in Tokyo and registered in Australia, before it hit Europe, but the message was the same. In New York’s pre-market, Toyota stock opened down to 80.88 from 85.60 and has been trading down ever since, trading at 80.80 at the opening bell and rose 10 minutes later to 81.25.

The question for traders was not whether Toyota stock would be affected, but by how much due to production shutdowns, the root cause of lowered profit expectations.

According to a Monday report from Tokyo by Automotive News with contributions for the Bloomberg News service, the shutdown could even affect exports to the United States of more cars than just the Toyota Yaris sedan. The report also noted Scion XB and Scion XD, as well as the Honda Fit subcompact.

Toyota, the world's largest carmaker, said it evacuated workers from several factories in the quake zone. For the record, Toyota has two parts plants in northern Japan and two affiliates, Kanto Auto Works Ltd. and Central Motors Co., that assemble small cars in the region.

From a stock perspective

For the record, Toyota recently made great gains after the U.S. government reported no defects in Toyota’s software and electronic-controlled accelerator systems.

Now the stock could find support near 81 or lower at 77, the swing lows of early January.