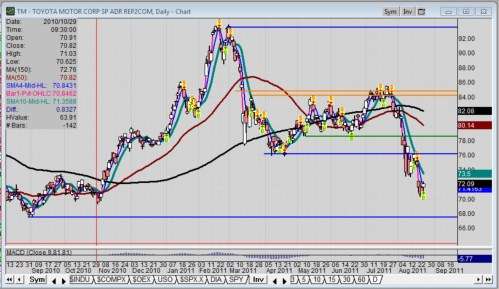 While TN writers, Patrick Rall and Hawke Fracassa, cover the automotive details of the 2012 Camry official launch today, Toyota stock investors await news of media and public reaction whether it be one of giant acceptance or disappointment as they look forward and hope for the car's success.
Advertisement

Just look at the daily chart. Since I wrote last about Toyota, nothing good has happened. For the record, Toyota Motor Company (ADR: TM) has suffered the same downward path as a result of selling pressure of all automakers by investors, having once traded above 84, but now plummeting to the low 70 range. So, the launch today is filled with anxiety for Toyota as well as its investors.

So, being facetious here, no pressure on the upcoming 2012 Toyota Camry to be a hit among auto buyers. The conccern is over the boldness of the styling. Too bold risks losing traditional Camry buyers. Too safe risks pushing away younger buyers with that taste for flair.

Fact is, it wasn’t that long ago when investors asked how much of Toyota’s stock up-move was directly related to the 2012 Camry news and all the photo shots, releases from Toyota with Akio Toyoda showing a peak of the front headlight. And the point here is, investors showed their own concern even then by their expectations.

Further recall how much the earthquake and tsunami twisted Toyota Motors (ADR: TM) stock performance, almost as much if not more than the accelerator issues. Then came the announcement of earnings loss which was exacerbated by the bear pressure of the general market. Next came the credit rating hit to America and the credit issues in Europe, the largest markets for Toyota products. Again, no pressure on the 2012 Camry! Yeah, right.

As I write, I have no idea what the vehicle actually looks like in total; I’ll let Patrick and Hawke reveal that. What I can reveal is how the market views Toyota stock in light of today’s announcement.

Unfortunately, it’s difficult to tell how much of Toyota stocks increase today is related to the 2012 Camry launch; or whether traders are simply buying because the market is stronger today. It is not usual for Toyota stock to gain on good market days.

Auto sector investors know Toyota has had many problems with quality, but investors have not failed to buy the stock on drawdowns; but this latest drawdown still has investors extremely cautious. After all, most are waiting for some news by Bernanke and company at Jackson Hole on whether there will be a QE3 or whether there will be some other decision which will bring order to the economic galaxy.

And the hope that the 2012 Camry will help Toyota get its mojo back is running just as high, as the risk that America could fall into a double dip recession is real.

From a technical chart perspective, Toyota stock is still in a downdraft along with the rest of the auto sector stocks. Just yesterday, Toyota stock made a low of 70.05 while it jumped up today in early trading. Still, for the record, the next level of major price support is 67.56, the low of September 2, 2010.

As I have written before, if that level is broken, it will likely be the general market and global credit issues driving the stock down, not Toyota as a company.