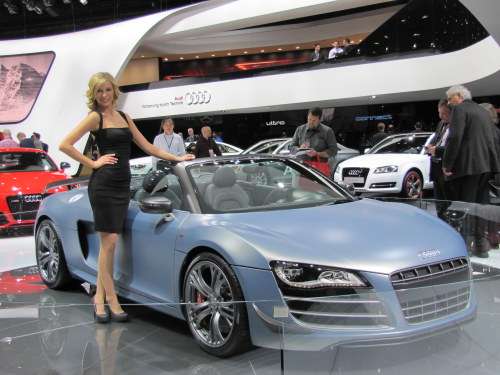 Press Preview was a resounding success with more than 5,200 credentialed media covering the new-vehicle introductions. Over 30% of those scribes visiting the NAIAS are from outside North America, including new media visitors from Qatar, Panama and Bulgaria. Additional media are expected to attend during Industry Preview, Charity Preview and Public Show.

What does this tell you?

"The buzz is back," proclaimed Bill Perkins, chairman, NAIAS 2012. "Press Preview exceeded our expectations with more than 93 percent of the new vehicles introduced being worldwide unveilings. I think the journalists need a few days to process everything they witnessed during the 35 NAIAS press conferences."

The NAIAS now transitions to two days dedicated to Industry Preview, followed by the Charity Preview and then the public viewing which runs through Jan. 22nd.

Wednesday at 12 noon the show floor will officially open for NAIAS Industry Preview. Industry analysts, supplier executives, designers, engineers and auto enthusiasts will compare, analyze, photograph, and benchmark the more than 500 cars and trucks on the NAIAS floor. For the record, Industry Preview early registration is running at 20 percent ahead year-to-date with more than 2,000 companies participating from 23 countries. Show organizers expect more than 21,000 visitors over the two days of Industry Preview.

Here is my video slideshow complete with commentary at the end.