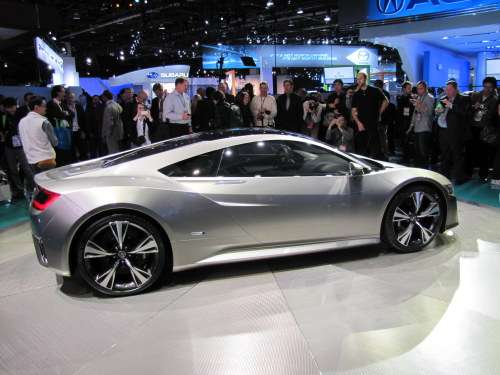 No wonder the parking was so bad around Cobo Center in Detroit. It seemed the entire world of journalists came to witness the largest set of unveilings at the NAIAS 2012 Press Preview.
Advertisement

The North American International Auto Show (NAIAS) 2012 opened its doors to over 5,000 journalists from 55 countries this morning, who witnessed the unveiling of 27 vehicles seen for the first time ever. NAIAS is in the middle of its two-day press preview, and show organizers said they expect approximately 40 total new-vehicle introductions.

“This week the NAIAS is the center of the automotive universe,” said Bill Perkins, chairman, NAIAS 2012. “The floor of Cobo Center is alive with journalists from around the world gathering stories and putting miles on their shoes while covering the 35 press conferences, so much so our web site received the highest traffic ever. What a day we had here in the Motor City!”

Here's one of my slip of the crowd videos

The crowd of journalists was so heavy at times it seemed like it was public viewing, not Press Preview. So, I skirted many of the reveals and went back after the crowd dissipated.

Frankly, I found I had access to vehicles more because the crowd was focused on one or two reveals. It gave me the opportunity to even talk with a few folds, like Allie Mayer, Manager of Public relations for CODA Automotive. Read: CODA Automotive announces 125 and 150 mile range for 2012 EV sedan at NAIAS

Likewise, I stopped to say hello to my former director at GM Joe Katona. He retired as well, but now represents VIA, the company that Bob Lutz sits on the board and makes electric conversions for commercial vehicles like pickups, vans, etc. I’ll have a special report on VIA later in the week.

Stay tuned for my videos of many of these vehicles later in the week. Likewise, stay tuned for my tweets and reports tomorrow; as I will cover the EyesOn Design Awards, one for Best Production, the other for Best Concept.