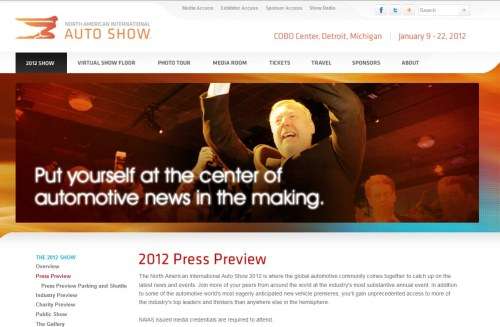 In case you haven’t noticed, changes in automotive marketing have been affecting auto shows worldwide by morphing for quite a few years now. Questions are, how much, how deep and will they forever change the traditional NAIAS press days as well as other auto unvelings?
Advertisement

Think about it. Press days at major auto shows like the 2012 NAIAS in Detroit are already less relelevant due to automakers' use of social media to tease unveliings.

Now to put that fact into perspective, think about this: The public seldom attends live events, but they more often have the desire. Physical location and accommodation limits make the situation so only a very small number of fans out of a population of multi-millions to attend the annual Super Bowl, the Stanly Cup Finals, the World Series and other major events, including presidential inaugurations. Every single event is covered via the media; and the vast majority of the population follows those events on television, radio and now the web..

Point is, none of those major media events have special press days; no need. The live event stands on its own. And it looks like the auto shows beginning with the 2012 NAIAS are getting a makeover in the form of a gradual morphing, one that will affect it from this day forward.

So, as I write today (Sunday), one day before the official Press Preview of the 2012 North American International Auto Show in Detroit, the face of the event has already changed. Just witness the automakers latest use of social media to tease the public with early reveals and pieces of reveals. Good or bad for the industry?

So, how far will these changes go? Perhaps end the traditional press days as we know it? Who needs press days anyway, especially when we have social media as a venue; Twitter to announce Facebook for images and You Tube videos to show the masses? And that’s the key object with any media event anyway: reach the masses.

Realize the 2012 NAIAS does not belong to the press; it‘s still a consumer-focused event. However, the automakers sure pander to the press when they need them to be on their side, especially when recalls and fires are announced, and they want to, as news anchor Ted Knight of the Mary Tyler Moore Show used to say, "take off glasses, look concerned."

Nonetheless, the press will cover anything if it is news, but the press has also a mind of its own. They often determine what is news; which means, if they are pressured in any way, may sway how, when, where and to what degree an event might be covered. That is how certain events get covered while more important events get relegated the back page in print or not even mentioned at all on television.

And yes, the press has a proclivity, whether it admits it or not, for allowing itslef to be manipulated. Think of all those auto reviews. Now think about who paid for the event, perhaps paid for travel of the media and fed them like kings and queens. How much freedom might there be in that report?

With all great respect to those of the press who stand firm against being bought, so to speak, truth is, the press is always in a position of being manipulated to shed a greater light on those who pay for events, especially automakers. Then again, the automakers know this much: tick off the press and your sales might be affected. GM suffered for decades even after it made better quality, while the choice coverage went to Toyota despite a drop in quality.

In a way, social media and the web are breaths of fresh air. In my opinion, they have brought a bit of freshness to the world of automotive marketing. And to those within the press who resent anything on the web as not being a purist form of journalism, I suggest they rethink their positions.

I see anti-web resentment all the time, especially in press rooms where the traditional press (not all) snub the web-only writers. I can usually shut them down with a simple statement: After 39 years in the auto industry, at least I spent time actually designing a car; meaning, I lived the business that they merely report about from afar. Yes, silence usually incurs.

The press cannot prod the industry that it needs to change with the times, then bitch when those times apply to them. Truth is, anything to do with the press is a social media event. It’s all about the public more than the press, but you might be able to tell that by their perspectives.

Fact is, even the press needs readers and watchers to make their work profitable which is actually paid and supported by paid sponsors. In the case of TorqueNews, writers get paid by the page view. If we do not write well, you do not read. But TN also needs sponsors as in paid advertisers to cover the overhead. We try our best not to let it get in the way. If it ever does, I will quit immediately. At least I have a backup - day trading.

Before Twitter and Facebook came on the scene, a day for the press at NAIAS, for example, was intended to socialize the unveilings. No different today; we simply have more than one venue to accommodate the events.

Word has it via an Auto News (AN) article that “automakers are using mobile apps and social media to transform many traditional pull-off-the-cover unveilings at the Detroit auto show into customizable entertainment for enthusiasts.”

AN people have always been very cordial to me in press rooms. I see them as a major player whereby their reporters often man and help set up an occasional camera. Welcome to my world where I am a one-man show at every event, including shooting video.

There is another side to this situation, though, at least from the press standpoint. Sure, I understand there is more than one way to market automobiles now, but why should the media waste valuable time and resources attempting to get the live news when it is increasingly getting trumped, upstaged and scooped by automaker marketing teams and their use of social media?

Will the press one day simply not show up? Will that force the automakers to simply use their own marketing teams to connect to the world via major social media events? It could happen.

People travel to the NAIAS from all over the globe, especially the press. Money is spent; it is a business cost. So, when the invitees get scooped by the inviters, that’s just bad business, in my opinion. For the record, I have attended a few seminars this past summer that were scantily covered by the press; and in one case, I think I was the only obvious one there.

Then again Detroit automakers have been known for doing bad business things for many years, like raising prices while paying high salaries and benefits, holding back information from the press when it suits them, demanding help from the taxpayers in bad times, screwing bond holders in bankruptcy, etc. Yes, not great in terms of corporate citizenship.

Now, as they play the press as a pawn in some marketing game that likely has no real plan other than to play social media and attempt to be communicating and cool, I ask again: Who needs press days anymore? The way I see it, the automakers are taking the media events by the horns and saying to the press, we don’t really need you like we once did. Live with it!

Mary Henige wrote on January 9, 2012 - 10:11am Permalink
Interesting perspective, but my view after 25 years in the biz, is that vehicles are meant to be seen. The excitement during media days is huge and motivates all of us. Plus, seeing old friends and colleagues is key, too. That said, social media brings these "stories" to a much wider audience - but online isn't the same as being there. @maryhenige @gm social media
Frank Sherosky wrote on January 9, 2012 - 7:58pm Permalink
Thanks for commenting, Mary. The fact that vehicles are "meant to be seen", and that "on-line isn't the same as being there" as you state, is what leads me to believe this may still happen eventually. Who sees the press previews in person? The press, not the public. The rest of us see it on local TV, but now on You Tube and other social streams. So, social media levels that viewing field. And that tells me the press is not as needed as in decades past. Heck, the OEM only has to make the video like the Cadillac ATS but control the whole process. Yes, I am now a member of the press, albeit on-line press; but I'm also a consumer. And I always felt the press got an opportunity that I seldom ever experienced until I retired from the industry and became part of the media. And yes, meeting colleagues and old friends is a nice feature; but still, for the press and the OEM, not the public. If the real value is excitement, then those reveals can still be made as a press preview. Doesn't Ford do that with its simulated press Q&A ads? In time, the public might not care as they were never part of the live preview until social media. Am I talking myself out of a job?