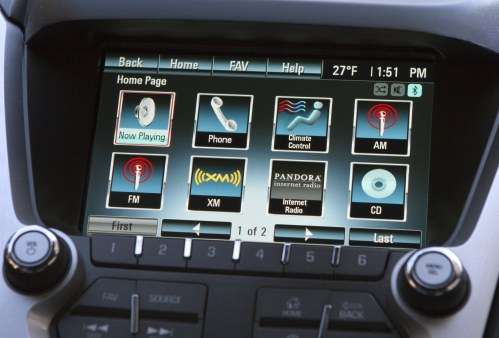 In case you haven’t noticed, web developers have moved away from internet development and shifted their efforts toward app development for smartphones and tablets, including OnStar. That explains why those that follow the NAIAS 2012 and CES 2012 say this will be a growth year for app development with automakers overseeing their selections.
Advertisement

I seem to be on everyone’s investment letter list these days; and as such, I receives tons of email offers, including offers from app development companies and gurus. One in particular wants me to invest my time and money in a company that will develop and market any app I may develop or idea I may concoct. Well, there is a reason for that: apps are hot and will grow hotter in 2012.

According to a recent article in USAtoday.com , an infotainment revolution is literally coming to cars. And based on my own research for TorqueNew as well as my own app opportunities, I tend to agree. However, there is a giant pushback from the NHTSA who thinks that telematics inside cars shouldn’t be seen let alone heard; as they tend to distract drivers and cause crashes. Ref: NTSB recommends ban on all cell-phone related communications while driving

One thing is different, though. An app for a car requires are far different approach than one for a smartphone; although most apps for cars share the same code DNA, so to speak. Safety while driving is crucial, and each automotive app has to reflect that; where as you do not have that situation walking down the street with a smartphone.

It is clear, nonetheless, the number of available apps is expected to multiply over the next few years. The situation for cars will be the same as it is for Apple's iPhone or Google's Android smartphones.

Think proliferation here. In other words, think of the car as an electronic device, not just transportation. There have already been dozens of articles written about the connectivity of the automobile. While NAIAS 2012 in Detroit is going on, automakers will also be presenting in Vegas for the Consumers Electronics Show 2012. In fact, it is already reported that Ford Motor Company (NYSE: F) will announce it is doubling the number of apps available for its Sync in-car infotainment system to 10.

However, with the advent of a watchful eye after the negative comments by the NHTSA, automakers are being very careful to roll out only those apps they think will not affect driver distraction. Fact is, right now most of the apps are merely automotive versions of same ones available to all smartphone users. That will change.

One point that has to be made is distinguishing between an app that can be accessed while parked from an app that may be accessed on the freeway. All automakers are fully aware of the significance of those distinctions.

Perhaps our lust to be always connected is affecting our ability to drive safely. It’s hard to be alert to the road and to an app.

Nevertheless, Ford is taking its apps very seriously. In fact, among major automakers, Ford Motor has shown the greatest interest in app development, making them the focus of its Sync system developed in conjunction with Microsoft.

On the other hand, General Motors Company (NYSE: GM) has not missed the boat. ONStar is its key player in this arena. For the record, this reporter covered a number of releases by OnStar in 2011. Read the following:
Cadillac and OnStar team up at 2012 Consumer Electronics Show
OnStar wins Best Telematics Safety Technology Award for ninth time
Mobile Apps are key to GM entering car-sharing business with RelayRides

Yet, no matter what the NHTSA thinks, society will and automakers will push the envelope. Also read: Wireless Car targets automobile as integral to connected society

So stay tuned next week as TorqueNews reporters cover the NAIAS 2012 and the CES 2012 regarding apps.

About the Reporter: After 39 years in the auto industry as a design engineer, Frank Sherosky now trades stocks, futures and writes articles, books and ebooks like, "Perfecting Corporate Character," "Awaken Your Speculator Mind", and "Millennial World Order" via authorfrank.com. He may be contacted here by email: [email protected] and followed in Twitter under @Authorfranks

Toyota's First EV Will Have a Name of BZ: Toyota BZ
First Videos From Inside The Boring Company's Las Vegas Loop
END_OF_DOCUMENT_TOKEN_TO_BE_REPLACED