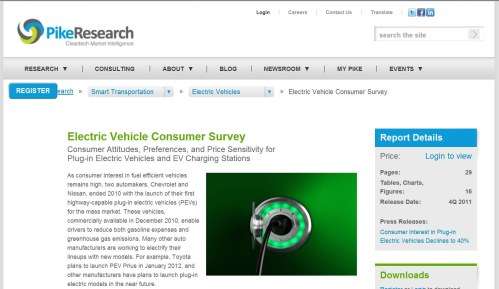 Yes, contrary to all the green writers and readers out there, and just in time for the 2012 North American International Auto Show in Detroit , Pike Research’s latest survey shows consumer interest in plug-in electric vehicles has declined in the past two years. Question may be, why? Bet you can guess.
Advertisement

You can also bet your bottom dollar that TorqueNews will be watching this trend indicator, especially as we cover the NAIAS 2012 in Detroit. Of course press days shouldn’t count, as it reflects hype but not consumer sentiment which is what really affects sales.

Nonetheless, the latest news release by Pike research indicates 2012 will be an important test of the commercial viability of plug-in electric vehicles (PEVs). Two automakers, Chevrolet and Nissan, ended 2010 with the launch of their first highway-capable PEVs for the mass market; and many other auto manufacturers are working to electrify their lineups with new models. Toyota especially plans to launch the PEV Prius in January 2012 and other manufacturers have plans to launch plug-in electric models in the near future.

However, as public awareness of electric vehicles continues to build with the increase in model launch activity, the new survey from Pike Research finds that consumer interest in purchasing PEVs has gradually declined over the past two years. In late 2011, the cleantech market intelligence firm conducted the third annual edition of its Electric Vehicle Consumer Survey using a nationally representative and demographically balanced sample of 1,051 adults in the United States. In the first edition, conducted in 2009, 48% of respondents stated that they would be “extremely” or “very” interested in purchasing a PEV. In 2010 that number declined moderately to 44% and in 2011 it fell further to 40%.

Can you guess the reasons?

“Price is the most significant barrier to consumer interest in electric vehicles,” says research director John Gartner. “About two-thirds of our survey respondents who stated they would not be interested in purchasing a PEV said that they felt such a vehicle would be too expensive. Others said that they would want to wait a few years until the technology is more proven, and almost half said that a PEV would not have sufficient driving range for their needs. These are all key issues, both real and perceived, that automakers will need to address if PEVs are to move successfully out of the early adopter phase.”

Despite many writers and comments to the contrary which support taxpayer subsidies, this should be no surprise to any readers who have been following my articles at TorqueNews. Frankly, I would hope that the next survey would ask those folks how they feel about subsidies for the few.

For the other side of this viewpoint, read one of the many articles by TN writer, David Herron: Overhyped bashing of electric car charging station subsidies in the Washington Post For the record, I have commented many times below his articles, and the public has responded with a great deal of passion.

More on the Pike Research Survey

Nevertheless, other key findings of the Pike Research survey were as follows (editor's note - corrected from 3 to 4 points):

1) Survey respondents stated that they would be most likely to choose Toyota (51%) and Ford (46%) when considering a PEV purchase, even though these two automakers did not have PEVs on the market at the time of the survey. Honda ranked third with 44%, followed by Chevrolet with 42% and Nissan with 35%.

2) Consumers are willing to pay a premium for PEVs, just not as much of a premium as automakers must charge during the next few years due to the cost of batteries. Pike Research’s price sensitivity analysis indicates that for a traditional gasoline vehicle that would ordinarily cost $20,000, the optimal price point of a comparable PEV would be $23,750 – a premium of 18.75%.

3) Interest in residential fast-charging equipment is high, with 80% of consumers interested in a PEV stating that they would also be interested in such a unit in their home. However, pricing is once again an issue – while Pike Research’s analysis suggests that the first generation of residential fast-charging equipment will cost between $500 and $800, only 28% of survey respondents stated that they would be willing to pay $500 or more.

4) Survey respondents expressed strong interest in smartphone applications that would provide useful information on the status of their PEV. The most popular feature was identifying the location of the nearest charging station (84%), followed by battery state of charge information (82%), electricity pricing data (76%), and the ability to schedule stop/start times for PEV charging (68%).

For the record, Pike Research’s report, “Electric Vehicle Consumer Survey”, examines the dynamics of consumer demand for PEVs, fast residential charging outlets, and workplace, public, and private charge points. It includes a detailed analysis of price sensitivity and optimal price points for PEVs, as well as data related to typical consumer driving patterns that will affect demand for such vehicles, and vehicle brand preferences. The report also includes information on consumer interest in smartphone applications that would allow them to better utilize a PEV. An Executive Summary of the report is available for free download on the firm’s web link, http://www.pikeresearch.com/research/electric-vehicle-consumer-survey

Frank Sherosky wrote on January 6, 2012 - 7:17pm Permalink
Note: After a review of the article, it was noticed there were indeed 4 key findings of the survey per the news release, not 3 as originally published. Be apprised, while no text was missing, the correction has been made.