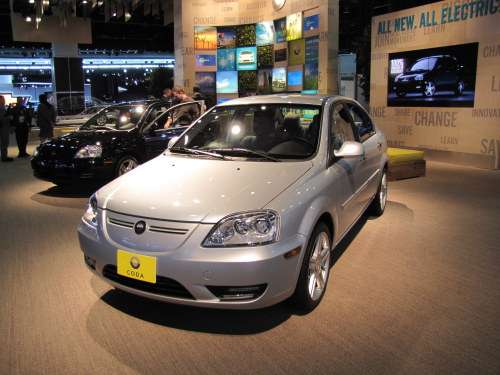 CODA Automotive, a leading developer of all-electric vehicles, today announced that the zero-emission CODA sedan will have two mileage range and price options in 2012. In addition to the original model, offering up to a 150-mile range with a MSRP of $39,900, the new 31kWh battery option will provide a driving range of up to 125 miles and will be available at a lower base MSRP of $37,250.

Of course, after federal tax savings (which this reporter calls taxpayer subsidy), the base price will be $29,750, and will qualify for additional state tax credits, including a maximum of $2,500 in California and up to $7,500 in 12 other states. The company developed this option for the launch of its first vehicle to accelerate the adoption of electric vehicles in 2012.

“Since day one, CODA has been committed to deliver affordable and reliable electric vehicles and clean technology to customers,” said Phil Murtaugh, CEO, CODA Holdings. “Research shows that the high cost of today’s alternative fuel technologies is one of the largest barriers that keep the average driver from purchasing an electric vehicle. Our continuous dedication to identifying affordable solutions and passing the savings on to our customers aligns with our mission of putting an electric vehicle into every garage.”

According to the news release that accompanied the reveal, the new 2012 CODA sedan mileage range option will maintain the key features for which the company is known. The first all-electric five-passenger, mid-size sedan with full rear seating and trunk space meets American drivers’ daily transportation needs without an ounce of gasoline:

Best in-class range per dollar: The new option has a base price of $37,250 and can go up to 125 miles on a single charge. Federal and individual state tax savings and credits may bring the price down to $22,250.

Fast and easy recharging: A 6.6kW onboard charger provides an unbeatable charging speed, providing a 100-mile charge in as few as four hours.

The best battery technology: The only electric vehicle sedan is powered by a safe and efficient Lithium-iron Phosphate (LiFePo4) battery pack with an industry leading 10-year, 100,000-mile battery warranty.

The new mileage range option offers CODA’s industry leading battery technology with the best range per dollar of any electric vehicle on the market. Deliveries of the first 2012 CODA sedans are anticipated to begin in February 2012.

The CODA 2012 sedan thus makes its North American International Auto Show debut; and, today, will be on display through Jan. 22. Test drives are available for media on Jan. 9 and Jan. 10. More information and reservations for the CODA are available at www.codaautomotive.com.

I interviewed CODA Automotive’s Manager of Public Relations, Allie Mayer, whereby I mentioned that a guest on CNBC had noted a week earlier that CODA was a Chinese company, which I had previously doubted. She assured me that statement by the guest on CNBC was not true, albeit the company does use supplier sources like all other OEMs from around the globe. She also disclosed that certain parts do indeed come from China, but all final assembly operations are made in America.

On the technical end, when plugged in or driving, the CODA sedan’s active thermal management system will heat or cool the battery to maintain battery integrity and consistent driving range in extreme temperatures. That accounts for a consistent driving range. However, she noted the usual disclaimer as do all EV OEMs that actual range and vehicle performance will vary depending on personal driving and charging style, speed, conditions, weather and cargo load. Fair enough.

When I asked about investors, she noted that CODA was held by a group of private investors. Headquartered in Los Angeles, CODA Holdings is defined as a leading developer of advanced Lithium-ion power battery systems comprised of three key business lines: CODA Automotive, CODA EV Propulsion Systems and CODA Energy. That means CODA is more than just a car company.

Together with its JV partners, CODA is working to reduce dependence on oil and is leading the way to a cleaner future through its electric vehicles and stationary energy storage products. The first consumer product available will be a zero emission four-door, five-passenger EV sedan with a full-size trunk that is designed to meet American drivers’ daily transportation needs.