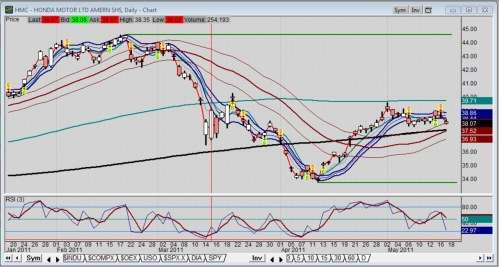 Honda Motor Company Ltd (NYSE: HMC) stock has suffered the effects of the earthquake, the tsunami and the resultant nuclear hazards, but is still trading just above its 200-day moving average. Question is, how long with this hold in light of the conditions? UPDATE: HMC closed today at 38.36.
Advertisement

The snapshot of Homda stock daily chart taken early this morning shows a major move to the downside into April with a stellar rebound into May above the 200-day moving average. This is just one of the technical analysis tools used by traders and fund managers to determine a stock’s relative strength.

On the fundamental side, though, Honda has a more than just home port problems. According to a previous article by TN writer, Patrick Rall, Honda has already issued a new recall of 833,000 vehicles to address an airbag issue. Read article here

For the record, this relates to the same issues that accounted for the airbag recalls between 2008-2010.

Beyond that, Patrick also reported on a fuel pump recall for the Civic. Together, these makes for bad press when the stock is already under pressure fundamentally.

Point is, Honda stock was a steady performer during the Toyota recalls. Now we see Honda production was suspended at factories in the ravaged Tochigi area. Among the most crucially affected was the Tochigi Factory, where the Honda R&D Center and the Honda Engineering facilities are.

Second point is, fundamentals do affect stock, no matter what the technicals say in the interim. Eventually they have their way into the bottom line, even with a great performer like Honda.

Question is, can Honda stock hold above the 200-day moving average at 37.59? Of course, only time can tell, but time is affected by news and the expectations of fundamental performance like earnings with all the issues in mind.

On the weekly chart view, the stock looks like it’s holding its own. However, note the volatility since February. The high was 44.56 countered by the April low of 33.76. That means Honda stock is trading below the 39.13 midpoint of those two price swings.

Disclosure: Frank Sherosky, creator of stocks charts for TN is author of "Awaken Your Speculator Mind" but does not hold any stock, option or futures position in this equity or futures at this time.