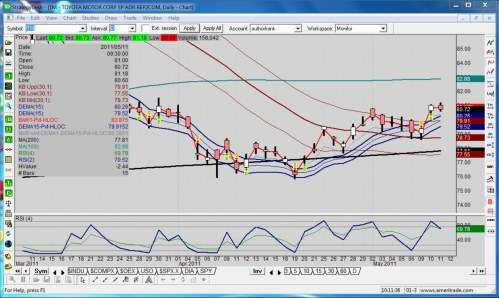 Despite a lousy Q1 report where Toyota Motor Corp. posted a 77 percent drop in net profit, the stock opened trading in New York on an even keel on Wednesday due to net profit for the full fiscal year. By the close it was up.
Advertisement

According to Thomson Reuters, January-March operating profit for Toyota was ¥46.1 billion, falling short of analysts’ average estimate of ¥94.6 billion.

Still, the stock chart does not show any giant sell off; and this is in light that the company avoided issuing a full-year earnings outlook as it continued to assess the impact of the March 11 earthquake, which interrupted production.

For the record per MarketWatch, the company did state production will be about 70% of normal on a global basis in June.

It also said in the statement that its production is expected to normalize in stages, starting in June, on global basis, rather than starting in July in Japan and in August outside Japan as it had announced last month.

The stock day chart shown already shows Toyota ( TM ) stock trading above key technical levels, above its April lows of 75.85; and that above its 200-day moving average of 77.81.

Furthermore, Toyota stock is trading above its 30-day moving average of 78.74, and recently broke out of the 15-day channel based on the dual exponential moving average. For the record, the stock opened Wednesday in New York at 81 even.

Question still is, how will Toyota stock trade later in the week as traders digest the earnings report along with a lack of forward statements pertaining to future profit expectations?

[Source for fundamental data only: Marketwatch report from Tokyo]

Disclosure: Frank Sherosky, creator of the chart and author of "Awaken Your Speculator Mind" does not hold any stock, option or futures position in this equity or futures at this time.