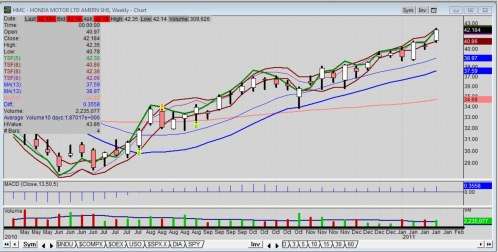 Honda Motors (NYSE: HMC) stock performance seems to reflect the success of its dream philosophy, its quality and its performance in the hands of its customers.
Advertisement

A picture is said to be worth a thousand words; and so must be the weekly chart of Honda stock.

Note the trend bias from lower left to upper right through time. For an investor or a trader, it doesn’t get much better than that.

While it can be dangerous for traders to see the world not as it is, but as it could be, Honda does just that.

They see the pursuit of impossible dreams as an empowering force, capable of producing revolutionary ideas. Dreams inspire them to create innovative products that enhance human mobility and benefit society.

Likewise, Honda encourages all of its associates to pursue their dreams. And it's their mission to share these dreams with others and to make them a reality.

It's that kind of vision that made the Honda Civic GX the only natural-gas passenger car at 2011 Detroit Auto Show.

Well, an investor’s dream is to find a steady performer that grows in the marketplace, and whose stock does the same.

There isn’t much else to say about Honda stock from a technical chart perspective, except that it’s been staying above the blue channel, the 13-week high-low moving average. That reflects one quarter of a year; and it’s been steadily rising since August.

And like the Honda philosophy based on the visionary principles of its founder, Soichiro Honda, "The Power of Dreams" empowers the company’s way of thinking which guides it and pushes forward. The stock chart is merely a way of keeping score.

LG's New EV Battery Plant Is a Welcome News for Tesla
Tesla Giga Berlin's New Hurdle: It's Not Only the Gov't, but Now Tesla Itself
END_OF_DOCUMENT_TOKEN_TO_BE_REPLACED