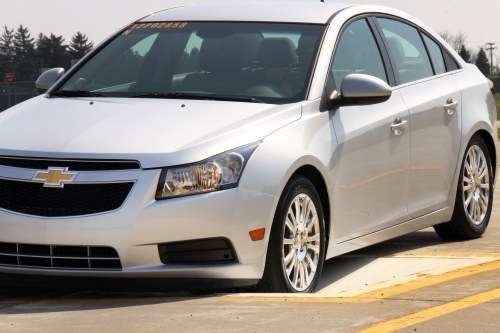 Michigan among other states in America is especially known for its Spring potholes which can tear down the best rides in the auto industry. That is why, in order to attain a world-class ride, the 2012 Chevrolet Cruze was especially driven through the engineered pothole course at the General Motors Proving Ground in Milford, Michigan.
Advertisement

The potholes at the General Motors Proving Ground in Milford, Michigan, are engineered to simulate severity of road damage and recreate varied load conditions that occur in a vehicle when it is driven through one. The Cruze, which has sold more than 1.13 million units in more than 100 markets around the world since its launch in late 2009, underwent extensive road testing around the world to ensure consistent ride quality and comfort from Korea to Kansas and points between.

The latest GM new release basically stated that Spring potholes are no match for the Chevrolet Cruze, because the vehicle is global compact engineered and tested to handle range of road conditions. As a driver of my wife’s 2012 Chevy Cruze, I must concur that the ride far exceeds the Cobalt that it replaced; and now I can see why.

The potholes at GM’s Milford Proving Grounds are indeed special, and literally world calss. First, they do not look like the potholes that drivers encounter on daily commutes. These are specially designed, fabricated in metal and planted into the ground with concrete surface around them. Even the downslope and the ramp up in these engineered potholes vary to simulate severity of road damage and recreate varied load conditions that occur in a vehicle when it is driven through one.

Reason is, the designer potholes provide consistency in testing, which allow for controlled, repetitive testing, necessary to assess durability and help determine the fine tuning that contributes to a comfortable ride.

In Michigan, where my own family does most of its driving, we're constantly reminded the buildup of moisture in the small holes and cracks in the road during the winter months alternates between freezing and thawing as temperatures fall and rise. Well, that happens in other places, too, around the world, but Michigan is really bad in places. This thermal stressing, though, causes expansion and contraction of the road surface. The result can be significant breaks in the pavement under the weight of normal vehicle traffic; and that is exacerbated with heavy trucks carrying heavy loads.

“We’ve got a wide variety of road surfaces that simulate real-world road conditions around the globe,” says Frank Barhorst, who supervises the Product Usage Measurements and Applications group in Milford. “The range of road surfaces that we test on goes from good to bad, in order to find the most-balanced condition for each vehicle we develop.”

“For durability, we might want roads with potholes or twist events. For noise, it could be chatter bumps on a dirt road, or concrete that is getting old and bald. Then there are considerations such as loose gravel for handling,” said Barhorst.

For the record, the Cruze is Chevrolet’s best-selling nameplate and helped the brand sell more passenger cars than any automaker in the United States in 2011. And, yes, my Judi loves her Cruze for more reasons than the good ride.