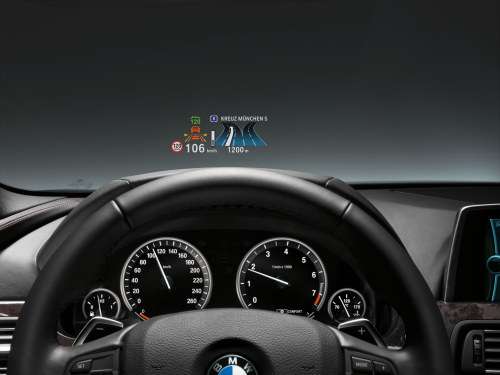 BMW Head-Up Display implies precision driving, no less than its contribution in a fighter jet. Initially developed for aviation, head-up display technology by BMW is now making a decisive contribution towards driving safety with the addition of full color.
Advertisement

Think of all the times you look down to see the speedometer or the tachometer. Every glance takes you a fraction of a second from looking forward at the road; and that has the potential for disaster.

As an instrument cluster designer and integrator in my Saturn days, we gave special attention to making the vision of the instrument cluster as non-obstructive as possible. Placement relative tot eh rim of the steering wheel was crucial. In fact, we had to apply Federal Motor Vehicle Safety Standards or FMVSS to each and every design.

The integration of the cluster was a major event that involved intense design reviews. So, I can only imagine the design and integration scrutiny that goes on at a company like BMW which touts each car it builds as the Ultimate Driving Machine.

Fact is, BMW was the first European car builder to adapt head-up display technology – a system initially deployed in aviation and constantly further developed over several decades – for use in volume-production vehicles. Since January 2004, this innovative driver assistance system has been an integral part of BMW ConnectedDrive offered for the BMW 5 Series. Consistently further developed and optimized, it is now a full-color head-up display and optionally available for almost all series.

According to the descriptive news release from BMW USA Group, low-flying over hilly terrain at a speed of almost 800 kilometers per hour in the cockpit of a Eurofighter jet is a challenge to even the most hardened of military pilots. “When you’re flying at tree-top height at around 220 meters a second, only extremely accurate head-up display technology is able to provide the necessary ease of mind,” comments Wing Commander Robert Hierl, test pilot at the Technical and Airworthiness Centre for Aircraft.

By means of a front panel projector, all flight-relevant data supplied by the flight management system as well as information and signals crucial to a mission are displayed on a second, vertically positioned panel located in the cockpit. In order to prevent the pilot from being distracted, all information is displayed in virtual form at eye level within the direct field of vision, thus guaranteeing the highest degree of concentration, supremacy and safety for both the pilot and the machine.

Applying head-up display technology to driving an automobile makes perfect sense, but be apprised that having a gage reflect onto the windshield is not that difficult, as we often had to should the cluster with a brow to prevent it from disturbing a driver, especially going down the proverbial, pitch-black night country road.

In terms of graphic representation, functionality and flexibility, the unique new Head-Up Display feature by BMW is intentional, and makes a significant contribution towards active safety by displaying driver-relevant information in high-quality resolution within the driver’s direct field of vision, so that he or she does not have to take their eyes off the road.

A crucial gain in safety as researchers know: A normal driver takes a whole second to read the speed indicator in the instrument panel or to glance at the navigation device. While the driver is distracted, that is without his or her eyes on the road, the vehicle covers a distance of around 14 meters when traveling in urban areas at a speed of 50 km/h – virtually a “blind flight”.

With Head-Up Display, the time required by the driver to assimilate information is reduced by more than a half. Thus the system making a decisive contribution towards concentrated and focused driving.

The virtual image projected onto the windscreen is perceived as “hovering“ at eye level above the bonnet and is visible only to the driver. Moreover, this form of display is less tiring, as the eye does not have to constantly change between close-range and remote vision. In terms we used to use at Saturn, it lessens the need for the eyes to adjust t the constant variation in depth perception. Also, the brightness of the image adjusts perfectly to the surroundings, so that the eye does not have to readapt each time.

The reproduction of data is affected by means of an intense light source, which is located inside the instrument panel and shines through a translucent TFT (Thin Film Transistor) display, the image being transferred to the windscreen via specially shaped mirrors. Owing to the convex shape and the physical properties of glass, using the windscreen as a reflector is an extremely complex process. In a windscreen, the light path is normally refracted, resulting in double images.

In the case of the Eurofighter, this problem is solved by means of an additional panel located directly within the pilot’s field of vision. BMW tackles this physical phenomenon with the aid of a wafer-thin foil, which is integrated into the windscreen, ensuring the superimposition of the projected images and, as a result, flawless, undistorted representation.

These speak for themselves, are perceived even faster and do not have to be decoded or interpreted. Even Eurofighter test pilot Robert Hierl is highly impressed: “Our monochrome head-up display technology is unable to offer such a brilliant display quality.”

C. Marshall wrote on October 28, 2011 - 1:14pm Permalink
This is great news and would be very valuable for someone like me who has low vision. Driving at night on dark roads would be something very useful for me.

Tesla Contemplates A New Strategy for China Retail even As Sales Boom
Jay Leno on Elon Musk & EVs: “I Think He Should Get ... Credit"
END_OF_DOCUMENT_TOKEN_TO_BE_REPLACED